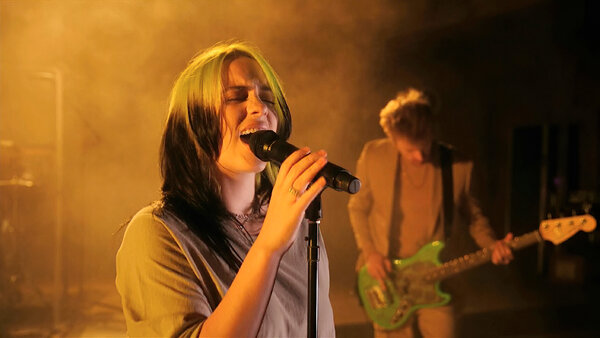 Every Friday, pop critics for The New York Times weigh in on the week’s most notable new songs and videos. Just want the music? Listen to the Playlist on Spotify here (or find our profile: nytimes). Like what you hear? Let us know at [email protected] and sign up for our Louder newsletter, a once-a-week blast of our pop music coverage.

Billie Eilish, ‘Therefore I Am’

There’s not much subtext to Billie Eilish’s “Therefore I Am.” It’s a direct brushoff — “I’m not your friend, or anything” — from someone who knows she’s in the public eye. The music revisits some of her favorite devices: a slowly pulsing beat, a skulking bass line, a vaudeville bounce to the chords, a switch between whispery singing and deadpan rapping with a dismissive chuckle. It’s a relatively minor addition to her catalog, but it has attitude enough to get by. JON PARELES

Foo Fighters, a band with rhythm at its core even though Dave Grohl has moved from drummer to guitar-strumming frontman, discover funk with “Shame Shame,” which backs the band’s rock guitars with a double-time beat and pizzicato strings. “Shame Shame” harks back to glam-rock, as Grohl sings about nihilistic despair — “I found a reason and buried it/beneath a mountain of emptiness” — even as the melodies lift the song toward hope. PARELES

It should be said, first, that “Old Town Road” was novel, clever and direct. And then it should be said, second, that nothing Lil Nas X has made since then has come close to that song’s vim, brightness or wit. His is the peculiar conundrum of the viral phenomenon burdened with the expectation of becoming something more, and burdened further by the budget, time and attention that such a goal requires. And so the further he progresses in his career, and the more professionals he works with, the less intuitive his music becomes. “Holiday” is clunky, stilted and dull, almost provocatively unmusical. His sing-rapping is labored, and the production — by Take A Daytrip and Tay Keith — is almost apologetically undemanding. To be fair, though, the song is merely a pretext for the video, which is a hyperfuturist update of the Missy Elliott oeuvre. And the video is merely a pretext for the continued spotlight on Lil Nas X, a funny, inventive and refreshing public figure for whom music is an inconvenience and, over time, almost certainly an albatross. JON CARAMANICA

Enjoy the tricky, sinuous Afrobeats groove — a loping bass line teased by filtered vocals, elusive guitar lines and dabs of percussion — of “Ginger,” a bilingual come-on Wizkid shares with Burna Boy, on the full track from Wizkid’s new album, “Made in Lagos.” Then borrow some dance moves, if you can, from the Nigerian-American choreographer Izzy Odigie in the “official dance video,” which unfortunately shortens the track and squashes it down to mono sound. PARELES

“Since the day we first met/I’ve had not one regret,” Valerie June sings in “Stay,” but with a caveat: “I don’t know how long I’ll stay.” An orchestra assembles around her, but her ornery, sweet-and-sour voice defuses any possibility of pomp. That’s just part one; “You and I” begins with voices and finger snaps, then gathers different ensembles: rippling folk-rock guitars, a bustling big band and swoopy synthesizers, melting into one another as she marvels, “So much to discover for you and I.” It’s not overstuffed; it’s profuse. PARELES

“if trump loses I will cover iris by the goo goo dolls,” Phoebe Bridgers tweeted on Election Day — a tantalizing promise that certainly impacted the future of American democracy. (Proceeds from the track on Bandcamp will go to Stacey Abrams’s Fair Fight organization.) The cover may have begun as something of a lark, but Bridgers — a dual citizen in the realms of both absurdist meme humor and sincerely felt songwriting — brings trembling emotion to her rendition of the ’90s-radio staple. Maggie Rogers provides impassioned vocals on the second verse, but her voice best fits the song’s sparse arrangement when it’s braided in harmony with Bridgers, who transforms the song’s bombastic refrain into a kind of introvert’s anthem: “I don’t want the world to see me, ’cause I don’t think that they’d understand.” LINDSAY ZOLADZ

When Kelsea Ballerini performed the rollicking “Hole in the Bottle” at the CMA Awards this week, she ended it with a winking activation of the Shania Twain bat signal: “Let’s go girls.” A few days later, she’s released a new version of the song featuring vocal contributions from Twain herself. The elder star’s iconic twang is a welcome addition to the second verse, but the best part of this version is their giggling ad-libs over the bridge, which conjure a certain … authenticity to the song’s central theme (“Just look at that … hole in the bottle,” Twain remarks, completely cracking herself up.) What’s better than drinking wine alone? Splitting a bottle (or two …) with Shania Twain, of course! ZOLADZ

Chris Stapleton, ‘You Should Probably Leave’

A vintage-style soul backbeat and two-bar melody phrases carry the terse storytelling of Chris Stapleton’s “You Should Probably Leave” from his new album, “Starting Over.” The song lands precisely where country meets Southern soul: with grit, details, clarity and ache. Every syllable — precise in meaning, sung with ambivalence — supports a narrative that, spoiler alert, is bound to lead to regrets. PARELES

From Brian Johnson’s screechy vocals to the bludgeon and crunch of the guitar riffs, “Realize” is instantly recognizable as AC/DC, a band that has rarely swerved from the sound it established in the 1970s. The group’s founder, rhythm guitarist and songwriter Malcolm Young died in 2017, but the songs on the new album, “Power Up,” are still, as always, by Malcolm Young and Angus Young, AC/DC’s lead guitarist and Malcolm’s brother. (Malcolm’s nephew, Stevie Young, has taken his place in the band.) While Johnson exhorts, “Feel the chills up and down your spine/I’m gonna make you fly,” Brendan O’Brien’s production brings subtleties to the band’s wall of guitars, embedding trills, quick lead licks and wordless vocals within the all-important riffs. PARELES

Run the Jewels, ‘No Save Point’

“Haven’t seen the sun with the naked eye much, so the neon is my god and it shine on the numb,” El-P raps on the first verse of “No Save Point,” Run the Jewels’ contribution to the soundtrack for the hotly anticipated video game Cyberpunk 2077. (An animated El-P and Killer Mike make cameos in the game as “the Yankee and the Brave” — a nod to the opening track on their latest album, “RTJ4.”) El-P’s vivid verse and bass-buzzing, blown-boombox production fit the game’s dark, “Blade Runner”-esque aesthetic. But then, characteristically, Killer Mike swoops in to survey the larger socioeconomic forces at work in this digital dystopia: “I used to pray to God, but I think he took a vacation, ’cause now the state of Cali is run by these corporations.” Let’s hope it turns out to be science fiction. ZOLADZ

As a young pedal steel guitarist in 1970s Houston, Susan Alcorn came up playing in country bands at honky-tonks. But she gravitated to uncharted territory, and in recent decades she’s been known for ambient solo performances that conjure a sleepy sonic gloaming. Only recently has she composed music with a full ensemble in mind, and assembled a quintet with some of the finest improvisers around: the guitarist Mary Halvorson, the violinist Mark Feldman, the bassist Michael Formanek and the drummer Ryan Sawyer. On “Northeast Rising Sun,” which closes the group’s debut album, “Pedernal,” Alcorn adapts a melodic refrain used in Sufi devotional singing, improvising on the pedal steel guitar in bright and shapely slashes as the band follows the piece’s descending harmonies in a joyful downhill tumble. RUSSONELLO

Congress was just weeks away from passing the Civil Rights Act of 1964 when Charles Mingus and his ensemble arrived in Bremen, Germany, during a tour of Europe that hs since gone down in history as one of the bassist and composer’s finest hours. They seem to have taken a special pleasure in offering this lengthy, gut-opening take on “Fables of Faubus,” Mingus’s musical rebuke of the segregationist Arkansas governor. Featuring the saxophonist, flutist and bass clarinetist Eric Dolphy; the tenor saxophonist Clifford Jordan; the trumpeter Johnny Coles; the pianist Jaki Byard; and the drummer Dannie Richmond, the sextet mixes Ellingtonian harmonies and quotes from “Lift Ev’ry Voice and Sing” into a half-hour exploration that’s heavy on rough, avant-garde improvising and passages of pregnant silence, all of which heighten the collective intensity. RUSSONELLO

Emily Sprague sings and plays guitar in the warmhearted indie-folk band Florist, but as a solo artist she records luminescent, synthesizer-driven ambient music that reflects the gentle wonders of the natural world. Her newly released album “Hill, Flower, Fog” provides a welcome bit of aural springtime for those bracing for a rough winter. The same goes for “Chasing Light,” a new composition she made for Moog to celebrate the release of the Moog One polyphonic synthesizer. Sprague deftly builds layers of billowing sonic radiance, crossing the playful eco-experimentation of Mort Garson’s cult classic “Plantasia” with the spiritual hypnotism of Laraaji. ZOLADZ