It was a beginning: the orchestra’s first performance for a live audience in 15 months, and a long-awaited “return to what we’re here for,” as Marin Alsop, the ensemble’s music director, told the audience.

It was also an ending: the first of three farewell programs with which Alsop, 64, will conclude her 14-year tenure. In that time she has brought Baltimore artistic successes and arguably the most impressive education program of any ensemble in the country.

Even given the orchestra’s financial and labor struggles, before and during the pandemic, Alsop is leaving on a high note. But there is also reason to despair in her wake. When she took the position in 2007, she was the first female music director of a top-tier American orchestra. She was, it seemed certain then, the avatar of a new generation of women on important podiums; in 2002, she had helped found what is now known as the Taki Alsop Conducting Fellowship to support aspiring female conductors.

But when she departs this summer, the field will go back to the way it was before she came: 25 major orchestras — the League of American Orchestra’s Group 1 of largest ensembles — with no female music directors. Alsop and her Baltimore appointment are often referred to as trailblazing, but so far she remains alone on this particular trail.

It’s true: There are growing numbers of prominent female conductors. “But they haven’t changed at the top level yet,” Alsop says, with a touch of resignation, in “The Conductor,” a new documentary about her that premieres on Monday, June 14, at the Tribeca Film Festival. “The old boys’ network — that’s been there for centuries. We have to create the old girls’ network, you know, so that we can really be there for each other, and support each other.” 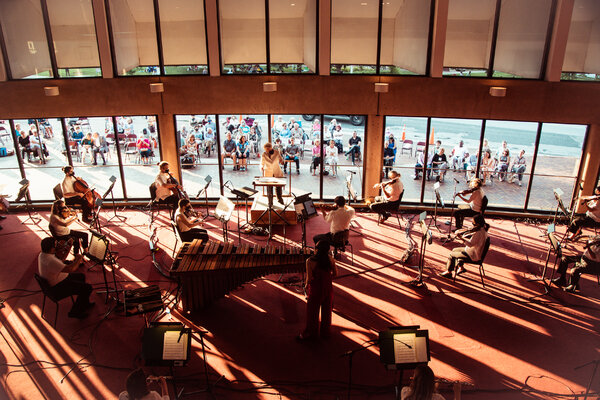 Alsop’s record — a host of commissions and recordings; ambitious tours; the founding of the groundbreaking OrchKids education program — is all the more impressive given how contentiously her time at the Baltimore Symphony began. In 2005, when her appointment was announced, the seven players who had served on the search committee released a highly unusual statement urging that the decision be delayed.

“Approximately 90 percent of the orchestra musicians,” they said, “believe that ending the search process now, before we are sure the best candidate has been found, would be a disservice to the patrons of the BSO and all music lovers in Maryland.”

Though Alsop was not mentioned by name, it was a clear rebuke.

“What should have been a moment of great joy turned into the worst nightmare of my entire life,” Alsop recalls in the new documentary.

The trouble wasn’t with her credentials. A regular guest with major American and European orchestras, she had worked her way up over the previous two decades with appointments at institutions of growing size and consequence, including the Eugene Symphony in Oregon, the Cabrillo Festival of Contemporary Music in California and the Colorado Symphony. When she started in Baltimore, she was also the principal conductor of the Bournemouth Symphony Orchestra in England.

Part of the resistance is likely to have come from the lingering allure of the maestro mystique: the idea that great conductors are commanding, male, often European taskmasters steeped in tradition — like Yuri Temirkanov, who had been music director of the Baltimore Symphony since 1999 and was stepping down at nearly 70 years of age. Temirkanov gave formidable accounts of the mainstream repertory and colorful Russian scores, but had shown scant interest in American music and had no real profile as a cultural leader in the city.

Alsop, a generation younger, seemed his opposite — less imposing; perhaps, for some, too casual; not truly “great.” In addition, she was open about being a lesbian — and about her committed relationship with Kristin Jurkscheit, a horn player, and their young son, Auden — in what remains a largely straight profession. Was homophobia a factor, in addition to sexism?

“Who knows?” Alsop said recently, during a break from a rehearsal at the Juilliard School, where she was working with students on a program of compositions by Jessie Montgomery, Joan Tower and Alberto Ginastera. “I think every phobia in the book was probably part of it.”

“But,” she added, “I would say it was all unconscious. I can’t say this was an overtly discriminatory reaction.” At the time, she explained, the Baltimore Symphony had been going through a difficult period financially, and the musicians felt marginalized.

“How I tried to interpret the reaction — though on some days it was difficult,” she said, “was that it was a manifestation of a really dysfunctional institution.” The musicians “were so angry at management; everybody was screaming at everybody. What could I do to try to alleviate their distress? I decided that the best medicine would be success.”

Brian Prechtl, a percussionist in the orchestra since 2003, agreed that the musicians’ resistance to Alsop was more about their frustrations with the administration and feeling shut out of a process they saw as “just bungled,” he said in an interview. Alsop made a point of rallying the troops before her tenure began, and her inaugural concert as music director was a triumph, with a blazing interpretation of John Adams’s “Fearful Symmetries” and a lucid, colorful performance of Mahler’s Fifth Symphony.

Prechtl said that the musicians steadily rallied to Alsop’s artistic vision and leadership style. “She really wants to change the orchestra world, and we’ve really enjoyed being part of that,” he said.

“The rest of the world has caught up with her,” he added. “Right now there is a reckoning going on. No question, Marin was ahead of the curve.”

A year after her arrival Alsop founded OrchKids, a program that provides free music education, instruments, mentoring and meals to children in Baltimore public schools, pre-K through high school, both during and after school hours; Alsop gave the project a jump start by donating $100,000 from the MacArthur “genius” grant she received in 2005. OrchKids began with 30 children; today it reaches about 2,000 students from 10 public schools, the vast majority of them Black and Latino.

Many classical institutions — long associated with rich white people — have outreach programs aimed at underserved communities. OrchKids, Prechtl said, is “just head and shoulders above any other orchestra’s efforts in terms of having an impact in Baltimore for social change.”

Born in 1956, Alsop grew up on the Upper West Side of Manhattan, the only child of two busy professional string players; she was drawn early to the violin. At 9, she had an epiphany when her father brought her to one of Leonard Bernstein’s Young People’s Concerts at the New York Philharmonic.

“I want to be that,” she recalls thinking in the new documentary.

She told Margaret Pardee, her beloved violin teacher at the Juilliard School’s preparatory division, about her new passion, but was told that “girls can’t do that.” Alsop went on to earn bachelor’s and master’s degrees in violin from Juilliard. But when she auditioned — three times — for the school’s prestigious conducting program, she was rejected every time. (That was then. This year, Alsop is the featured speaker at Juilliard’s commencement, at which she will receive an honorary degree.)

Alsop realized that if established routes to a podium were closed to her, she would have to take matters into her own hands. In 1981, with a group of female colleagues, she formed String Fever, a small ensemble that played string arrangements of swing classics.

Looking back, she sees the venture as mostly “about breaking out — about: ‘Let’s stop with all the rules.’” In 1984, with crucial support from Tomio Taki, a Japanese fashion mogul and businessman, she founded Concordia, a lively 50-member orchestra that specialized in 20th-century American music, including jazz scores. (Taki would later fund the Taki Alsop Conducting Fellowship.)

A turning point came in 1988, when the 31-year-old Alsop was awarded a conducting fellowship at the Tanglewood Music Center, where she worked closely with Leonard Bernstein; she returned the following summer for more coaching. Already her hero, Bernstein became her mentor. In the summer of 1990, just months before he died, he invited her to travel with him to Japan for the inauguration of the London Symphony Orchestra’s Pacific Music Festival. (Her eight-disc set of recordings of Bernstein works includes some definitive performances, including a theatrical yet probing rendition of “Mass” and a restless, dazzling “Age of Anxiety” Symphony.)

In Baltimore, once the musicians and Alsop got over “their initial edginess,” said the critic Tim Smith, who covered her years with the orchestra for the Baltimore Sun, they brought out the best in each other.

“I found her performances increasingly interesting and exciting, full of the kind of character that I didn’t always hear at the beginning,” Smith said, adding that the orchestra was “definitely in a better class technically than when she arrived.”

“Temirkanov was interested in soul,” Smith said, while Alsop “was interested in the old rudiments of accuracy and balances. She could get fabulous results; I heard some great Schumann, Shostakovich.”

One of the most bruising periods of her tenure came near the end: in 2019, when the orchestra’s management, grappling with budget problems, locked out the players during the summer to try to make them accept a contract with fewer guaranteed weeks of work. Alsop spoke out on behalf of the musicians; a one-year agreement brought the players back. Last year, as the pandemic brought performances to a standstill, a new five-year contract was finalized that restored a 52-week work schedule, but with significant wage concessions in light of the economic fallout.

“The Marin Festival,” as the orchestra is calling it, continues with a program June 12 on the grounds of the Music Center at Strathmore in Bethesda, the orchestra’s suburban second home, and ends with a livestreamed gala on June 19, performed without an audience and featuring the soprano Renée Fleming and the premiere of a new piece by the Baltimore composer James Lee III in honor of Juneteenth, featuring narration by the local rapper and musician known as Wordsmith.

As music director laureate, Alsop will conduct three subscription programs each season; for the next three years, the veteran conductor James Conlon will be the orchestra’s artistic adviser, as potential successors to her are tried out. And she will maintain her association with OrchKids.

She was the first woman in all three positions. That is the achievement of — and also the pressure on — a trailblazer.

“Clearly, this was a battle that needed to be fought,” Alsop says in the documentary. “I’m happy I was the one that could fight it, and I’m happy that no one else will have to fight that horrible fight.”