Plus: a lodge in Bali, an exhibition of Katherine Bradford’s dreamlike paintings and more recommendations from T Magazine.

Welcome to the T List, a newsletter from the editors of T Magazine. Each week, we share things we’re eating, wearing, listening to or coveting now. Sign up here to find us in your inbox every Wednesday. And you can always reach us at [email protected]. 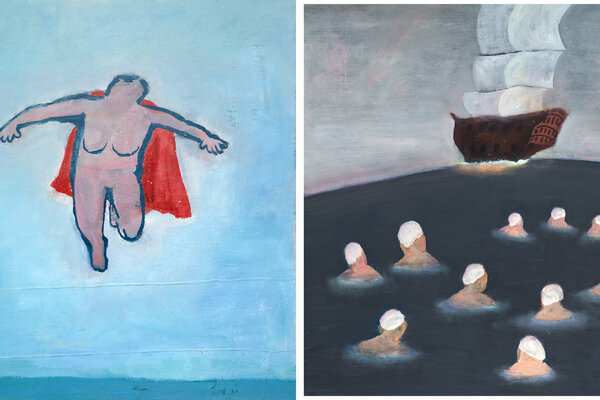 The paintings of Katherine Bradford offer themselves like scenes from a dream, vivid and immediate even as their meaning remains mysterious. Fluorescent nude men ring a pool suspended among the stars. Disembodied legs wearing dress shoes encroach on a green-haired woman’s personal space. A group of sea swimmers gaze out at lightning on the horizon. “Sometimes I do a painting,” says Bradford, who splits her time between Brooklyn and coastal Maine, “and then I make it darker, and then darker and then darker. It’s because I like the mystery. I like things that happen at night.” Bradford has been painting since the 1970s, but her turn to figuration in the ’90s serves as the starting point for the first solo survey of her work, now at the Portland Museum of Art in Maine. Across more than 40 paintings, the show traces her technical evolution — from single subjects to ensembles, from oils to acrylics — as she returns to what she calls her “bag of tricks”: swimmers, caped superheroes, floating horizontal bodies. The artist is drawn to these avatars of fear and uncertainty, she says, because “it’s the opposite of those old stately portraits of royalty, where they’re supposed to look invincible. I like to do people who are slightly falling apart.” “Flying Woman: The Paintings of Katherine Bradford” is on view through Sept. 11, portlandmuseum.org.

The British designer Luke Edward Hall was listening to “Week-End à Rome,” the synth-driven 1984 pop hit by Étienne Daho, when he dreamed up his latest capsule collection for Chateau Orlando, the fashion and housewares brand he launched in February 2022. A French song about an Italian getaway, it evoked for Hall the sun-drenched promise of summer vacations and languorous, long lunches in the Mediterranean — and spawned retro restaurant-inspired motifs in his trademark scribble for T-shirts, tote bags, a beach towel and a poster. Hall has designed interiors, ceramics and clothes for brands including Burberry, Ginori 1735 and Diptyque, but Chateau Orlando allows him to indulge his personal whims, such as zanily patterned cotton sweater vests and drink trays featuring an illustration of his whippet, Merlin. He test drove this latest capsule on his honeymoon hopping between Lake Como and the Amalfi Coast in June, but those staying closer to home might find the brand’s cherub-adorned beach towel, a spritz and an Italo-disco playlist can usher in a lazy afternoon in their own backyard. From about $100, chateauorlando.com.

A Farm-Fresh Shop in Vienna

For the past 20 years, the family-run Meinklang biodynamic farm and winery in Austria’s Burgenland region has focused on producing ancient grains like einkorn and emmer (from which it makes its own beer) and grass-fed Angus beef. This spring, inspired by a pandemic pop-up in Vienna, the estate’s managing director, Niklas Peltzer, and Werner Michlits, one of the three sons still operating the farm, opened Meinklang Hofladen, a farm shop and bistro in a converted home in the capital city’s Fifth District. “We preferred a cleaner, modern look that reflects the farm’s character through the materials we’re using — we didn’t want it to seem artificially old or kitschy,” says Peltzer of the minimalist design, which features bouquets of dried herbs and hand-carved oak shelves lined with jars of pickled and preserved produce from last year’s crops. Ninety percent of products on offer come from the farm, and are joined by nearly 200 bottles of natural wine from across Europe, the United States and Australia. The chef Thomas Piplitz, previously of Studio in Copenhagen, assembles a seasonally driven daytime menu of herb-heavy salads and small plates, like the signature Angus tartare, for the handful of tables in the shop and street-side terrace until 3 p.m., when the bistro starts pouring vino alongside housemade charcuterie and cheese from the Austrian Alps. Margareten Strasse 58, Vienna, meinklang.at.

A Designer Cooperative From Ecco Leather

After two years of isolation, collaboration has never felt so precious. With its first project available for purchase by everyday customers, Ecco Leather, the Danish tannery that typically sells directly to manufacturers, seems to agree. At.Kollektive brings together four star designers for regular nine-item drops of considered leather objects, including furniture, clothing and accessories. The names include the Catalan designer Isaac Reina, the French designer Natacha Ramsay-Levi, the German designer Kostas Murkudis and the British designer Bianca Saunders; Ramsay-Levi takes the reins for the initial collection, out this fall, in her first time working on furniture and her first design outing since her departure from Chloé, where she served as creative director, in 2020. The results include an ottoman and side table that pair rough Trani marble with vacuumed leather. “I realized that the veins we were freezing on the leather echoed the natural veins of the marble, so we accentuated this dialogue, as if in a game of mirrors,” Ramsay-Levi explains. Furthering the collaborative spirit, each season the group plans to work with an architect (beginning with the Belgian Bernard Dubois) to devise leather-centric displays for the pieces, which will be on view at Ecco’s gallery and boutique in Copenhagen. From $200, atkollektive.com.

A Bali Property at One With Nature

Insomnia drove the Singaporean former fashion executive Bernard Teo to search, five years ago, for the “most inhospitable place on earth” and then go there: Ethiopia’s Danakil Depression, with its 125 degree temperatures, and onward to the Omo Valley. On the ground there with the villagers, he finally slept through the night, and was inspired to foster that kind of interdependence with the environment, albeit in a friendlier climate — among the radiant green rice fields of Tabanan Regency on Bali, in Indonesia. His hotel, the Lodge in the Woods, opens this week as a series of low-slung concrete structures that hew to nature, with hallway roofs punctured to accommodate sinewy tree trunks and a colossal boulder backstopping the open-air river house. Filled with Central Javanese wooden statues and batik textiles by the Bali-based American jeweler Lou Zeldis, who died in 2012, the six guest rooms (including a two-bedroom barn) evoke the Tropical Modernist Geoffrey Bawa’s seamless indoor-outdoor living. Harmonizing with nature here means encouraging all to roam freely, including four albino horses and seven albino Etawah goats, who may join guests for a swim in the nearby waterfalls and tide pools. Visitors can also plant zucchini and eggplant on the adjacent chemical-free farm and enjoy meals in the whitewashed dining room overlooking the pool. It’s a sanctuary, Teo says, where “humans and animals mingle without distinction.” Rooms from $240 per night, lodgeinthewoods.com.