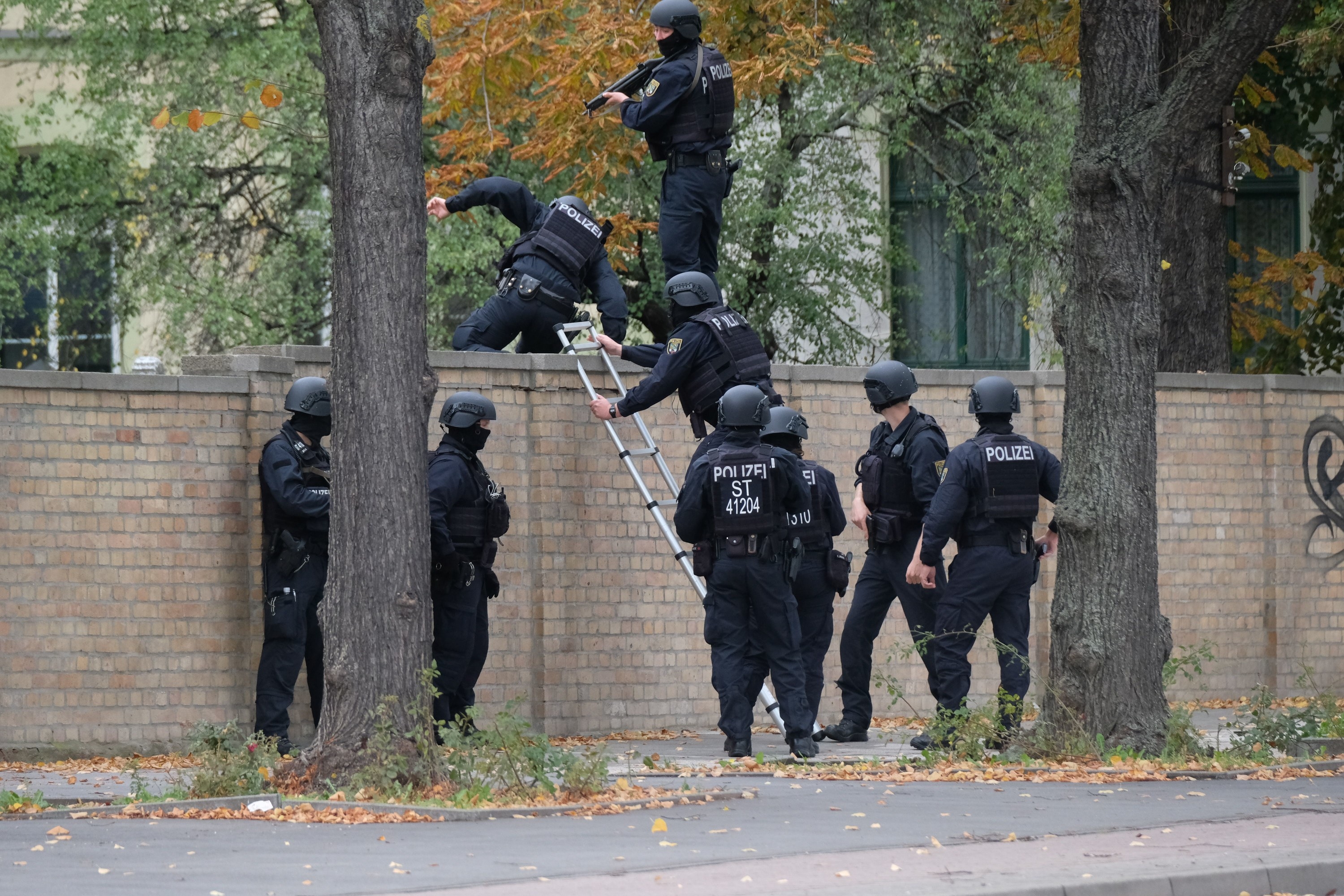 The shooting attack that left two people dead in Halle, Germany Wednesday, was livestreamed on Twitch for more than 30 minutes before the video was removed, a spokesperson for the video platform confirmed to BuzzFeed News.

The gunman, who has not been officially identified, could be heard on the stream railing against feminism, Jewish people, and used slang common on websites like 4chan and 8chan.

The shooting, which German law enforcement officials are calling a “rampage attack” occurred on Yom Kippur, the holiest day in the Jewish calendar.

On the Twitch livestream, a man with a shaved head, says in English, “My name is Anon and I think the holocaust never happened.” He also shows off his ammo and the scope of his firearm. 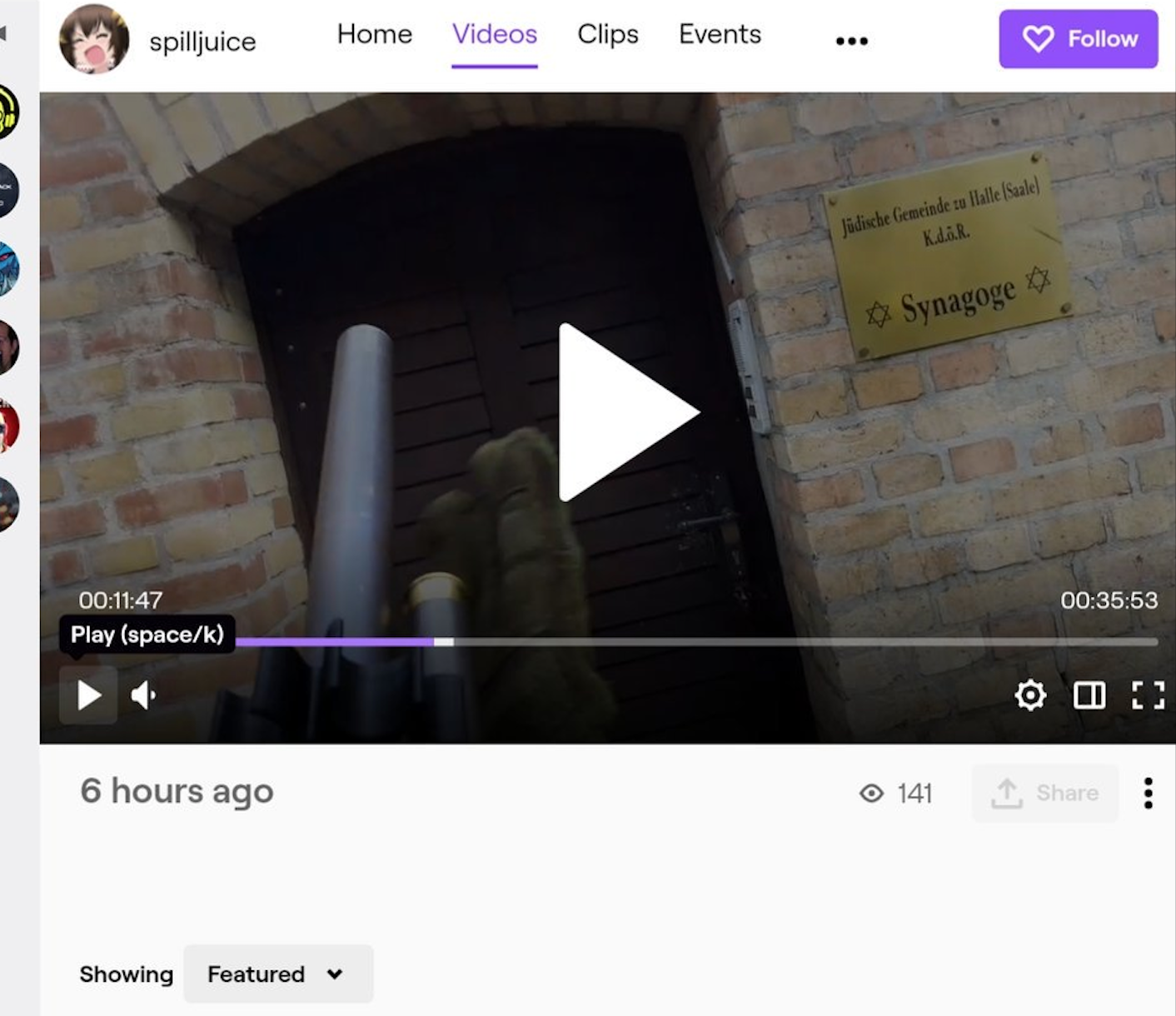 Calling himself “Anon” is a reference to message boards like 4chan, 8chan, or Germany’s Kohlchan, where anonymous users call each other “Anon”.

“Feminism is the cause of declining birth rates in the West which acts as a scapegoat for mass immigration,” the man on the livestream continues. “And the root of all these problems is the Jew.”

The gunman, while still livestreaming, then tries to break through the doors of a synagogue.

After he fails to break into the synagogue’s doors, he repeatedly calls himself a loser. “One time a loser, always a loser,” he says before giving up trying to enter the synagogue.

“We barricaded the doors from the inside and waited for the police”, Max Privorozki, a leader of the Jewish community in Halle, told German news outlet Der Spiegel.

Unable to get inside, residents reported seeing the gunman shoot a girl outside the synagogue with an automatic rifle. He then allegedly threw a hand grenade over a wall at the Jewish cemetery.

The gunman then allegedly open fire at a nearby kebab shop, killing a male customer.

“We are shocked and saddened by the tragedy that took place in Germany today, and our deepest condolences go out to all those affected,” the Twitch spokesperson said. “Twitch has a zero-tolerance policy against hateful conduct, and any act of violence is taken extremely seriously. We are working with urgency to remove this content and permanently suspend any accounts found to be posting or reposting content of this abhorrent act.”

Local media outlets initially reported that there were two attackers, but only one was arrested Wednesday by German law enforcement after hijacking a taxi. The livestream also only showed one attacker.

A spokesperson for the German prosecutor-general released a statement Wednesday calling the attacker likely a right-wing extremist.

The gunman’s connection to radicalized online spaces like 4chan was not ignored by the communities there.

Users on 4chan and the German message board Kohlchan excitedly posted updates Wednesday as details of the attack emerged in the press.

If he’s wearing a combat suit it’s reasonable to assume that it was more of a Brenton Tarrant,” one Kohlchan user wrote, referencing the white nationalist Christchurch shooter, who killed 50 people in mosques in March.

Though the video was taken down by Twitch, it is currently being shared on apps like Telegram and as a torrent file on radicalized message boards.

According to one message board thread, viewers were able to watch the stream up until a man in the kebab shop was shot.

“Tard tries to get in the synagogue a couple of more times but fails all the same. Gets bored and instead goes into some random halal shop and shoots and kills one the clerks begging for his life,” one user wrote. “The other two clerks get away because again, his homemade tard gun is trash. Thats were it ended for me.” 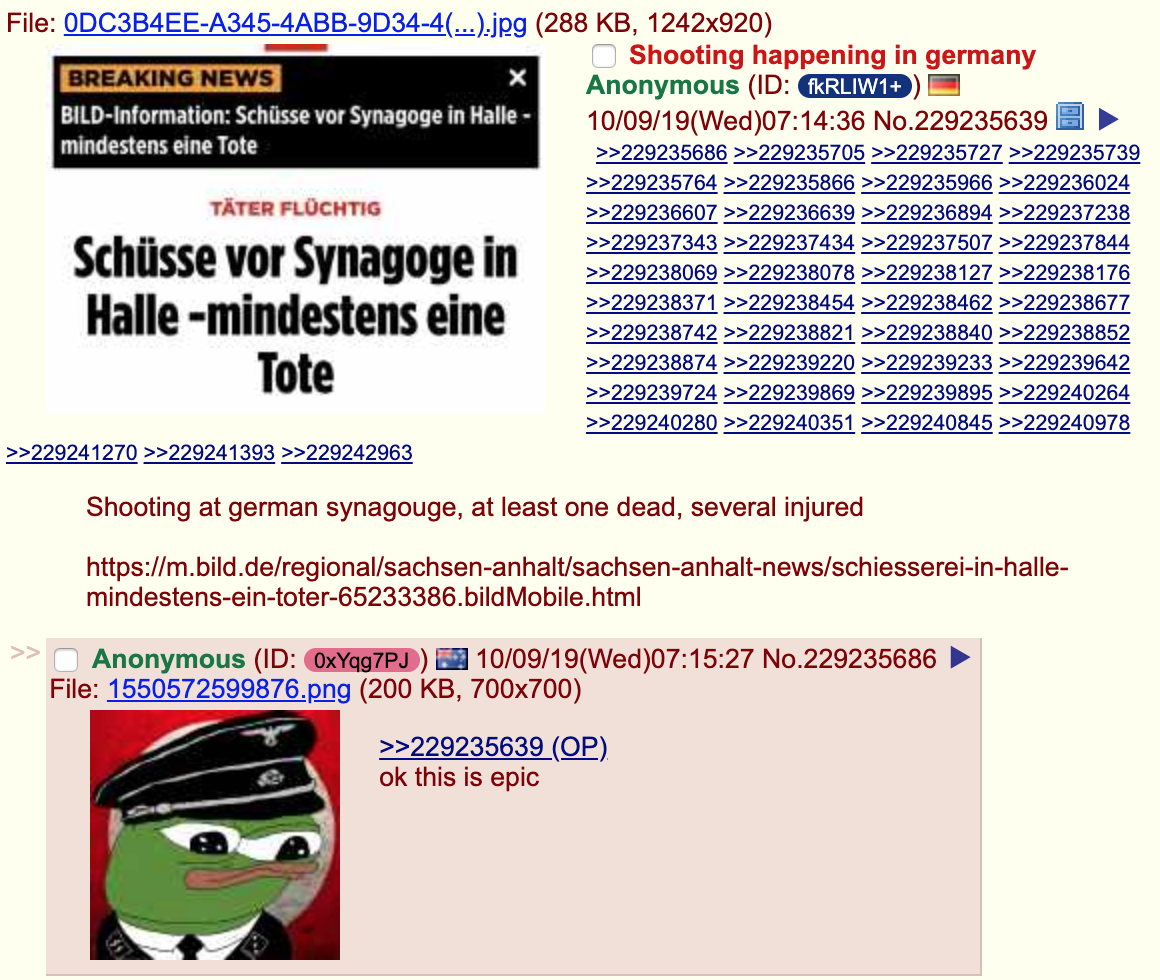 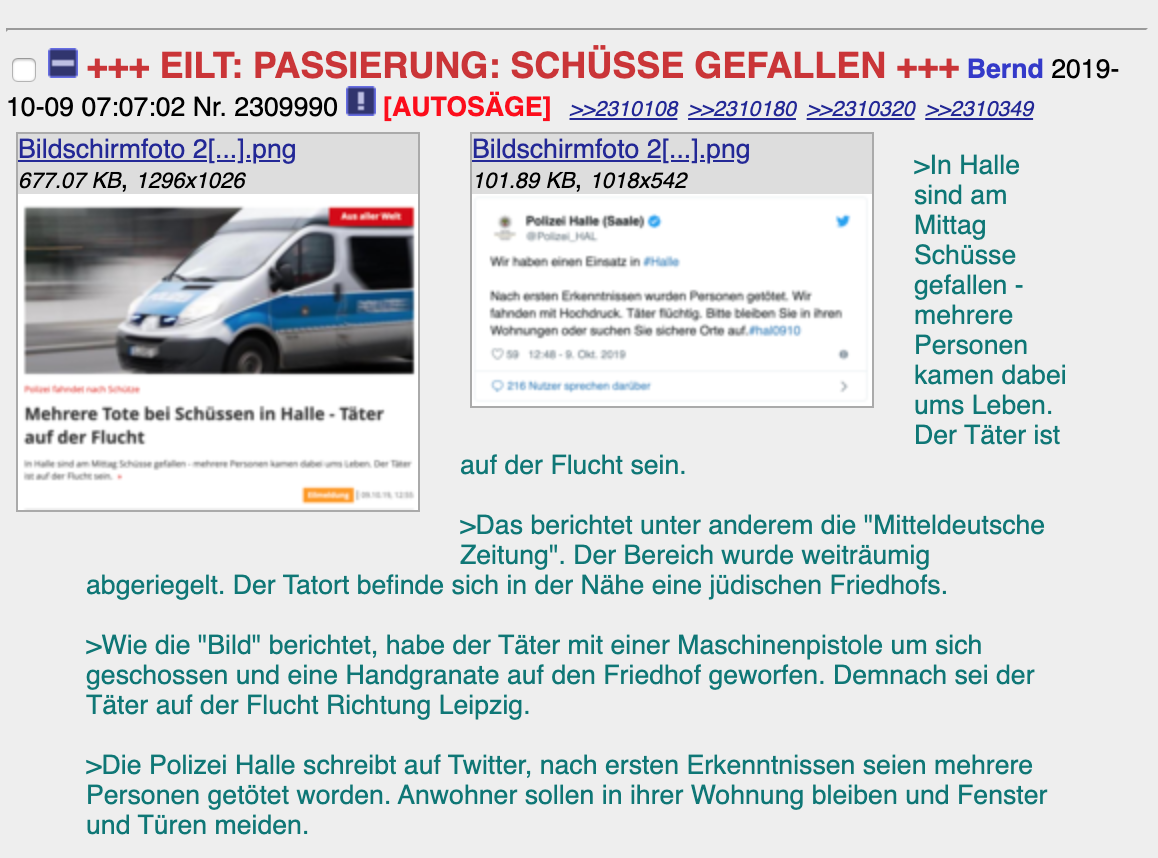 “It is terrible news from Halle and I hope very much that the police will manage to catch the perpetrator or perpetrators as quickly as possible so that no other person will be in danger,” Chancellor Angela Merkel’s spokesperson, Steffen Seibert, told a news conference Wednesday.

The attack in Halle comes three months after the murder of local pro-migrant politician Walter Lübcke in Kassel, Germany, allegedly carried out by a known neo-Nazi.