Most summers, as tourists pour into New York City to see theater, New Yorkers pour out to see theater elsewhere. This summer, though, they may do so with extra ardor. As the pandemic lifts, the pent-up demand for live, in-person theater is first being met in the Berkshires and in the mid-Hudson region, where companies are putting up tents, arranging outdoor immersive experiences and welcoming audiences to buildings that have been empty for too long.

Some of those companies are old and some new: The Williamstown Theater Festival has been at it since 1955, but Great Barrington Public Theater just started in 2019. Shakespeare & Company, as its name implies, goes heavy on classics — starting July 2, Christopher Lloyd plays King Lear — while Barrington Stage Company focuses on musicals and new plays. For mainstream fare (if “The Importance of Being Earnest,” opening next week, counts as mainstream), look to the Berkshire Theater Group. For something more experimental, try Bard SummerScape or New York Stage and Film.

Wherever you go — below, our critics highlight five possibilities — you will still find pandemic precautions in place. (Check each theater’s website for specific safety policies.) Even so, after a dark time, these summer shows and festivals truly offer something to celebrate.

Audiences have always been drawn to the Williamstown Theater Festival for its artistry, which is strong, and its geography, which is sublime. Tucked amid the Berkshires on the campus of Williams College, in a corner of western Massachusetts that’s just a meander away from Vermont, it seems like the kind of spot that would have an open-air stage or two.

In an ordinary summer, no such luck. But this year, Williamstown is taking its slate of world premieres outside.

The first stop is the front lawn, where the season starts with “Celebrating the Black Radical Imagination: Nine Solo Plays.” Curated by Robert O’Hara, a current Tony Award nominee for his direction of “Slave Play,” the production offers three separate programs, each made up of three 30-minute plays: by Guadalís Del Carmen, France‑Luce Benson and NSangou Njikam (July 6 to 10); J. Nicole Brooks, Terry Guest and Ike Holter (July 13 to 18); and Charly Evon Simpson, Ngozi Anyanwu and Zora Howard (July 20 to 25). 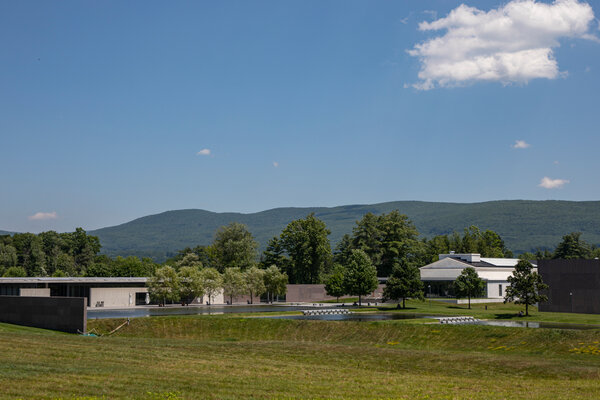 Down the road at the Clark Art Institute, from July 13 to Aug. 8, the museum’s vast reflecting pool will become the stage for “Row,” Daniel Goldstein and Dawn Landes’s musical, starring the singer-songwriter Grace McLean, part of the original Broadway cast of “Natasha, Pierre & the Great Comet of 1812.” Directed by Tyne Rafaeli, “Row” is inspired by Tori Murden McClure’s memoir, “A Pearl in the Storm,” about rowing solo across the Atlantic Ocean.

And from July 20 to Aug. 8 around the town of Williamstown, audiences can experience the immersive performance “Alien/Nation” on foot or by car. The director Michael Arden and his company, the Forest of Arden, who made last summer’s immersive “American Dream Study” in the Hudson Valley, teamed up with the playwrights Jen Silverman and Eric Berryman for this one, which uses local history from 1969 as a starting point. (wtfestival.org) LAURA COLLINS-HUGHES

The Frank Loesser musical “The Most Happy Fella” boasts one of the most wondrous scores of the 1950s — a decade filled with stiff competition. The show is packed with songs whose styles are mixed and matched with formidable agility, going from operatic arias to dance romps to jazzy croons and back again.

Yet “The Most Happy Fella” is less famous than, say, Loesser’s “Guys and Dolls,” and that might have something to do with what some might generously call its baggage. The middle-aged, homely title character, Tony, an Italian immigrant prone to mangling English, falls for, deceives and eventually wins over a younger waitress. This plot has not aged well.

This makes the prospect of the director Daniel Fish’s “Most Happy in Concert” (Aug. 5-7) even more intriguing — especially since his ensemble is made up of seven female and nonbinary performers. (While SummerScape events usually take place on the Bard campus, in Annandale-on-Hudson, N.Y., this year’s productions will be performed at the Stage at Montgomery Place, an outdoor venue in nearby Red Hook.)

Of course, the experimentally minded director has been there and successfully done that already: In 2015, also at Bard, he took “Oklahoma!,” long associated with a certain aw-shucks all-Americanness, and pulled off a “vibrant, essential excavation,” as Ben Brantley put it in his review of the premiere production. The show went on to win the Tony Award for best revival four years later.

Now Fish is teaming up again with his “Oklahoma!” musical collaborators, Daniel Kluger and Nathan Koci, and the actress Mary Testa (Aunt Eller), who will sing alongside the likes of the “Toni Stone” star April Matthis and the protean performer Erin Markey. Whether a full production ever happens remains a mystery for now, but the prospect of this director with this cast and this score is enough to light up August. (fishercenter.bard.edu) ELISABETH VINCENTELLI

Last year, this regional theater in the Berkshires, a proving ground for new musicals, announced a truncated summer season. But state directives meant that its artistic director, Julianne Boyd, had to constrict it even further, moving an indoor show, “Harry Clarke,” outdoors. But summer 2021 promises more shows in more venues, inside and out.

This season begins, in a tent on the Barrington Stage Campus, with a celebration of the songs of George Gershwin (June 10-July 3). Directed by Boyd, it stars Allison Blackwell, Alan H. Green, Britney Coleman, Jacob Tischler and Alysha Umphress. The tent will also host “Boca” (July 30-Aug. 22), an evening of Jessica Provenz’s short comedies about Florida seniors; as well as concert evenings featuring the Broadway stars Elizabeth Stanley (June 28), Jeff McCarthy (July 24) Joshua Henry (Aug. 16), and the husband-and-wife pair Orfeh and Andy Karl (Aug. 23). The couple, who met in the Broadway adaptation of “Saturday Night Fever” and later appeared together in “Legally Blonde,” call the show “Legally Bound.” Aaron Tveit, a current Tony nominee for “Moulin Rouge! The Musical,” will perform at the theater’s gala.

Theater is not just what you see when it’s finished, it’s what goes on beforehand. New York Stage and Film, an incubator of works in development, provides that “beforehand”; something called “The Hamilton Mixtape” showed up there in 2013, two years before it opened as “Hamilton” on Broadway.

Usually held on the campus of Vassar College in Poughkeepsie, the festival looks a little different this year. The pandemic has pushed its events into various venues around town, and the Black Lives Matter movement has pushed it, like all arts organizations, to rethink programming. The new artistic director, Chris Burney, has responded with a promising slate of work from Black, Latinx and Asian American artists.

The big draw, on July 31 and Aug. 1, is Michael R. Jackson’s “White Girls in Danger,” a follow-up to his 2020 Pulitzer Prize winner, “A Strange Loop.” Directed by Lileana Blain-Cruz, “White Girls” is a satire of Lifetime Original-style movies as seen from a Black woman’s perspective, but Jackson’s radically sympathetic worldview suggests more than a little love in the critique.

Jackson is not the only theater artist exploring race and danger in Poughkeepsie this summer. “Mexodus,” a “concept album” created and performed by Brian Quijada and Nygel D. Robinson, is about the thousands of enslaved people who instead of heading north on the Underground Railroad went south to Mexico (July 17 and 24). “South,” by Florencia Iriondo and Luis D’Elias, is a one-woman musical inspired by Iriondo’s experiences as a Latina in the United States (July 23 and 24). And “Interstate,” by Melissa Li and Kit Yan, follows a transgender slam poet and a lesbian singer-songwriter on an eventful cross-country journey (July 25).

New York Stage and Film is for artists, yes, but since artists need feedback, it’s for audiences as well. (Most events are “pay what you can.”) Who isn’t it for? Critics. We can go, but can’t review, which makes it a real vacation for everyone. (newyorkstageandfilm.org) JESSE GREEN

The serenity that descends on visitors upon arrival at the Hudson Valley Shakespeare Festival has everything to do with the landscape as seen from the bluff — breathtaking river, low mountains and sky. Never mind the saber-rattling name of the town, Garrison, or the fact that West Point is across the water, barely downstream. These grounds, at the historic Boscobel House and Gardens, are a soothing setting for pre-performance picnics and a gorgeous backdrop to the stage in the open-air tent as sunset turns to night.

Still, it is an area with a particular reverence for the Revolutionary War, which makes the festival’s season opener an enticingly provocative match. “The Most Spectacularly Lamentable Trial of Miz Martha Washington” — directed by Taylor Reynolds and running June 24 to July 30 — is by James Ijames, one of the most exhilarating playwrights the American theater has right now. Set at Mount Vernon as the widowed Martha lies ill, tended to by enslaved people whose freedom is promised as soon as she dies, it is described as a fever dream — and if it’s anywhere near as brilliant as Ijames’s Sally Hemings-Thomas Jefferson satire “TJ Loves Sally 4 Ever,” it could be unmissable.

So it’s helpful that both of the festival’s live productions this summer will be filmed for streaming. But if you can, do yourself a favor and go in person. “The Tempest,” directed by Ryan Quinn and running Aug. 5 to Sept. 4, will be the company’s goodbye to Boscobel, its home of 34 years. The theater isn’t going far — just upriver to Philipstown — but if you want to catch that stellar view from the tent, this is last call. (hvshakespeare.org)