Farm-Style Fun in the City 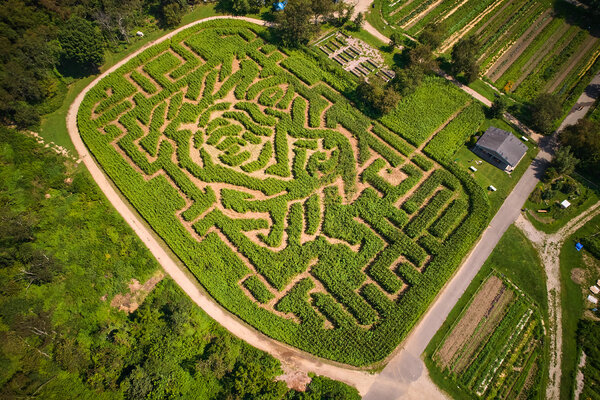 An artist who turned soup cans into Pop Art icons would probably be amused to see one of his other works reimagined in thousands of stalks of corn.

You can see the results this weekend at the Queens County Farm Museum, which will unveil its latest Amazing Maize Maze, a three-acre labyrinth carved into a cornfield. This year’s version, inspired by Andy Warhol’s 1966 screen print “Cow,” is a highlight of the Queens County Fair, an old-fashioned festival taking place on Friday from 3:30 to 8:30 p.m. and on Saturday and Sunday from 11 a.m. to 6 p.m.

Tickets, which must be bought online, are $14 on Friday; $20 for adults and teenagers and $15 for ages 3-12 on weekend days; and $45 and $35 for a three-day pass. They include the maze, live music, children’s crafts, a scavenger hunt, opportunities to feed animals — among them, alpacas, sheep and goats — and, on Saturday and Sunday, fun like sack races, pie-eating and cornhusking contests and a family entertainment tent. (Rides, midway games and certain attractions cost extra.)

Can’t make it to the fair? The maze remains open Fridays through Sundays (and Columbus Day) through Oct. 30. And if you visit the museum, you can even see real steers.
LAUREL GRAEBER

The summer might be winding down, but Jacob’s Pillow Dance Festival — the rural oasis for dance in Becket, Mass. — has more to offer, at least online. The festival met the challenges of the pandemic with digital programming that has opened up its remote, idyllic grounds to a wider audience. While in-person programming has ended for now, full-length productions from the end of the season, filmed on the open-air Henry J. Lier stage, are still streaming free at jacobspillow.org.

Against the verdant backdrop of the Berkshire Hills, the fearless dancer-athletes of STREB Extreme Action Company test the limits of the human body in “STREB: From Ringside to Extreme Action,” a retrospective of Elizabeth Streb’s daredevil work, available through Sept. 16. And in “Ballet Coast to Coast” (streaming through Sept. 23), dancers from Boston Ballet, Houston Ballet and Pacific Northwest Ballet come together in a program featuring works by Ulysses Dove, Justin Peck, Stanton Welch, Helen Pickett and Alejandro Cerrudo.

More from the festival is available indefinitely at youtube.com/jacobspillow and in the podcast “PillowVoices: Dance Through Time” at pillowvoices.org.
SIOBHAN BURKE

Return of the VMAs

After making do with a patchwork, partially pretaped ceremony last year in the throes of the pandemic, the MTV Video Music Awards will return to form on Sunday with a live broadcast — audience and all — at Barclays Center in Brooklyn.

Doja Cat is sure to be the evening’s leading lady, not because she’s up for the most awards — that distinction belongs to Justin Bieber, with seven nominations — but because she’s doing double duty as both host and performer. With “Kiss Me More,” her collaboration with SZA, Doja will also compete with the likes of Cardi B and Megan Thee Stallion, Lil Nas X, and the Weeknd for video of the year, the ceremony’s signature honor.

Other performers include Camila Cabello, Kacey Musgraves, Lil Nas X, Olivia Rodrigo and Shawn Mendes. The broadcast begins on Sunday at 8 p.m. Eastern time (the preshow starts at 6:30), and can be viewed on MTV and other Viacom channels, or on Paramount+.
OLIVIA HORN

The composer and multi-instrumentalist George Lewis was in New York late last month to witness the local premiere of a Tyshawn Sorey piece named in his honor. But the veteran is not just collecting hosannas, as a recent concert demonstrates. “Minds in Flux” — Lewis’s latest orchestral work to be championed by the conductor Ilan Volkov and the BBC Scottish Symphony Orchestra — had its premiere at the Royal Albert Hall at the end of August, as well.

Audio from the performance is free to stream on the BBC Sounds site until early October. Titled “George Lewis and Beethoven,” the show is well worth a dedicated two-hour listen. On the first half, Lewis’s half-hour opus blends virtuosic orchestral playing with swerving, real-time electronic refractions (courtesy of software written by Damon Holzborn). A post-premiere interview with Lewis is equally engaging. And after the break, Volkov and his players bring their ready-for-anything poise to two Beethoven works (the concert aria “Ah! perfido” and the Second Symphony).
SETH COLTER WALLS

Since 2016, OnlyFans has become the platform of choice for adult entertainers and sex workers to take full ownership of their labor. But why not make it a digital stage as well, given the uncertainty of the future of theater as the pandemic lingers?

The playwright Gage Tarlton has done just that with his intimate “xXPonyBoyDerekXx: an onlyfans experience,” a multimedia work centered on the complex nature of desire versus privacy.

On Aug. 31, the titular character, a chiseled entertainer played by an unnamed actor, started posting a series of messages and videos on his OnlyFans page. Through this content, which will be available until Sept. 19 and can be viewed by paying $8 on the platform, this purposely anonymous entity bares more than his toned physique, inviting the audience to do the same.