It’s Thanksgiving, plus a pandemic. Check online before you go to a gallery this weekend. Many spaces have shortened their hours or are closed for the holiday.

I’m only a middling fan of Cecily Brown’s paintings, but she has stuck to her stylistic guns and respect is due. Her current show at Paula Cooper is one of her best — although my favorite remains an exhibition of small oil studies at Maccarone in 2015. Those works felt complete, but completeness is not necessarily a priority for Ms. Brown.

A deliberate confusion reigns in her larger, more ambitious canvases. Blizzards of brushwork usually in shades of pink fill her surfaces, through which recognizable motifs and fragments are intermittently visible: animal forms, nude models, the windows of a studio. This shifting ebb and flow is contrarian: It refuses the ideals of finish and skill, wreaking havoc with the gaze, especially the male one. The marks can bring to mind the female nudes of old master painting, blown to smithereens. They also have the allover quality of Abstract Expressionism, but its big, clear gestures are mocked by Ms. Brown’s many small brush strokes.

A frequent theme here is the grand still life of the Dutch Golden Age. Groaning boards covered in red recur, often with a pair of cat eyes glowering in the black beneath them, so do suggestions of strings of pearls and an occasional wine goblet. “The Splendid Table” (2019-2020) — a hulking triptych — can evoke a blood-soaked battle scene from a distance; up close blurry forms of freshly killed game emerge.

The best paintings here take distinct approaches to motif, suggestion and color: the ostensible still life of “Red and Dead,” the apparent woodland fantasy of “The Demon Menagerie” and the de Kooning-esque centrifuge of “When this kiss is over.” Their differences will be exciting to follow. 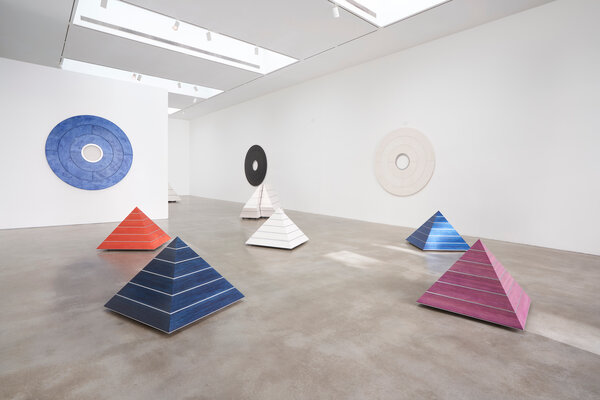 Sam Gilliam’s been making paintings for more than 60 years, most famously the huge, color-dappled canvases that he hangs, like heavenly curtains, unstretched. So it’s only natural that “Existed Existing,” his inaugural show at Pace, the first New York gallery ever to represent him, should extend across two buildings. It also includes three distinct bodies of work — a group of dapper wooden sculptures, a room full of glowing watercolor monochromes on giant squares of Japanese paper, and nearly a dozen enormous acrylics of varicolored snow, a few of which he’s named after Black public figures he admires like the congressman and civil rights pioneer John Lewis, who died this summer, and the poet Nikki Giovanni.

The acrylics are key, but I’d recommend starting with “Five Pyramids,” a single piece comprising five discrete wooden forms on rolling casters. Mr. Gilliam builds up these pyramids with layers of plywood, divided by thin aluminum pinstripes, and stains their faces deep purple, red, or blue. The execution is so sharp that the pieces strike the eye as flat, more like 2-D renderings than 3-D objects. But it’s a flatness more expansive than any notion you may have walked in with, one that makes the world seem much larger than you realized.

Once you’ve seen that, you’ll understand what the acrylics do to color, in every sense of the term. Their busy, buzzy surfaces, all texture and noise, blow apart any fixed ideas you started with, leaving you gaping at the sheer scale of what you’re looking at.

Many of the painted scenes in “Blue Boys Blues,” the Ghanaian artist Gideon Appah’s first solo show here, are inspired by his life in Accra, the country’s capital. There are nightclub revelers mid-cigarette. Homebodies lolling in underwear. But there are stranger sights, too: otherworldly vistas that have the larger-than-life feel of formative memories and the potent symbolism of dreams.

Unlike their Black counterparts in Mr. Appah’s more realistic portraits, these dreamscapes’ inhabitants are mostly greenish-blue, like the verdigris of weathered bronze. In this fictional cosmos, skin color doesn’t range between black and white. Rather, bodies turn from black to blue, as people move from the real world into mythic realms. Throughout, the artist’s loose painting style leads to nice moments of surprise. In “Teen Smoking on an Imaginary Street,” for example, unexpected traces of orange paint interweave with ocher brush strokes to portray the branches of a faraway sapling peeking between a palm tree’s half-desiccated fronds.

As galleries have started mounting a sustained attempt to give Black figurative painters the recognition they deserve, one worries that institutional zeal translates into something more detrimental behind the scenes: unfair pressure placed on these painters to stay the course, their own desires be damned. So it’s heartening to see Mr. Appah’s paintings wander widely. At one moment, he seems to be sampling the limbless torsos and barren horizon lines of European surrealist painters; at the next, he’s delving into childhood recollections. Memory has been a prominent theme in Mr. Appah’s work for a while now. That focus serves him especially well in 2020, with so much of the present world off limits.

“Consciousness is constantly mutating, moving from one state to another, and possibly back again,” the New York-based artist Tishan Hsu wrote in a catalog accompanying his exhibition at the Pat Hearn Gallery in 1986. How to represent these mutations in artistic form? Mr. Hsu did that with strange, gorgeous precision in about 30 sculptures, wall reliefs, drawings and other works made from 1980 to 2005 that you can see in “Liquid Circuit” at the Sculpture Center, the artist’s first museum survey exhibition.

Mr. Hsu trained as an architect at M.I.T., but he was also interested in artificial intelligence. The builder’s and technologist’s approach is apparent in “Liquid Circuit” (1987), an electric yellow wall relief with industrial handles that has waving lines painted in a dark field suggesting a spooky digital screen. “Vertical Ooze” (1987) is a powder-blue object that straddles the divide between biomorphic sculpture and a tiled industrial space or a science-fiction film set.

Mr. Hsu’s wall reliefs recall elements of Minimalism and ’80s Neo-Geo, like Ashley Bickerton’s sculptures. (Mr. Bickerton extended the concerns of Pop Art, however, by including product logos and references.) Mr. Hsu’s work is subtler, with flickers of surrealism, psychedelia and cybernetics. Mostly, however, they feel fresh and wildly prescient, predicting perfectly how consciousness has mutated even further in a digital and biotech age.

The self-taught artist Purvis Young was nothing if not prolific. His output includes hundreds of paintings that he hung outdoors in Good Bread Alley in Miami’s Overtown neighborhood in the early 1970s; the roughly 3,000 pieces he sold to the collectors Don and Mera Rubell in 1999, the entire contents of his studio at the time; and the 1,884 artworks left behind when he died in 2010.

So James Fuentes’s exhibition, featuring 15 paintings online and 8 in the gallery, is a drop in the bucket — and not an especially strong conceptual one. But for those who haven’t seen much of Mr. Young’s art, it’s a welcome and gratifying introduction.

The gallery presentation better displays the textures of the scavenged objects on which he painted. In “untitled (MM 11324),” from 1974, strips of wood in different shapes form a frame decorated with wispy bodies that surrounds an image of a saintly, crying Black man. Recurring throughout the show, this theme of the individual in relation to the group is fitting for someone who worked alone intensely, yet was a notable public part of his disenfranchised community, which he brought to wider attention through his art.

The unjust dynamics of American society were never far from the mind of Mr. Young, who did a brief stint in prison as a teenager, for breaking and entering, and took inspiration from the protests and Black Arts Movement of the ’60s. In the most haunting piece here, “untitled (MM 11315),” 1973-4, eyes representing the establishment surround a prone, Black, bleeding body and a crowd of onlookers behind bars.

What comes through equally is the spiritual side of Mr. Young’s practice. Haloed figures, funeral processions, angels, and horses abound, creating the feeling that judgment is looming — but with it, the possibility of redemption.