The painter David Byrd was born in Springfield, Ill., in 1926. When he was quite young, his father, who had mental illness, left the family. When David was 12, his mother, unable to cope, ceded her six children to foster homes.

How this affected Byrd, who died in 2013, will never be known. But a trace of this trauma seems immanent in the tender paintings and colored-pencil drawings he made of life on the psychiatric ward of a Veterans Affairs hospital in Montrose, N.Y.

Byrd worked there as an orderly for three decades, having joined the merchant marine at 17; served in the U.S. Army during World War II; studied art for two years in New York with the Cubist Amédée Ozenfant and struggled to find a job that would allow him time to paint.

The hospital provided this, and subject matter, too. Byrd made tiny sketches during quiet times on the ward that became the basis for colored pencil drawings and the paintings. His surfaces are delicately textured and thin: The white paper or canvas glows through, to disembodied effect. Although Byrd also depicted life in Montrose, the hospital ward remained his primary focus, serving as a kind of never-ending figure-drawing class, where the unpredictable patients contrasted with the stripped-down geometry of institutional architecture.

This seems to be the case with “Hospital Hallways” (1992), the show’s largest canvas. Here a long hallway intersecting with others create a recession of concentric wedges of pale yellow light and pink walls in which four patients can be seen; to the side, a doctor has just stepped into an elevator, cast in blue light.

Byrd worked for years on a scrapbook of drawings, accompanied by cryptic observations. Last year, the Anton Kern Gallery, with the artist’s estate, published a striking facsimile of it, “Montrose VA, 1958-1988.” The current gallery exhibition, which has the same name, shows Byrd methodically working up his haunting images and several pages from the scrapbook. 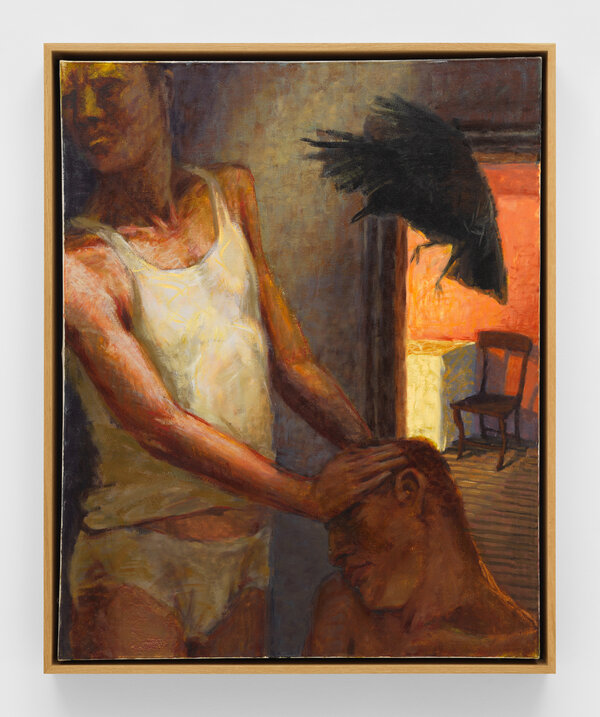 When the artist Hugh Steers, just out of Yale, was doing realist figurative painting in the mid-1980s, that genre, so hot right now, was out of fashion. His earliest pictures, of gay-themed allegorical narratives, felt like art in search of an era.

In 1987, Steers tested H.I.V. positive. Thereafter the style of his work — a meld of Edward Hopper moodiness and Pierre Bonnard color — stayed the same, as did the narrative form, but the content took on sharp focus, evident in this beautiful show of paintings, “Strange State of Being,” from later in his career. (Steers died of complications from AIDS in 1995 at 32.)

In several, the setting is a sickroom, and in some the allegorical mode still dominates. In the early “Crow” from 1988, a half-dressed man touches the forehead of another man as if feeling for signs of fever as a black bird wings toward them like a maleficent angel. In a later painting, “Hospital Bed” (1993), the story is more straightforward. A figure lies in a bed cradled by another figure. It’s a classic Mary-and-Jesus “Pieta,” except that both the figures are men, both nude, and the prone man is breathing oxygen through a tube.

Pictures like these came across with an immediate, lived emotional weight when they first appeared during the AIDS crisis in the late 1980s, and do again today during the pandemic. And that weight is differently powerful now. “I would like to be able to act or have someone care about me the way some of the people in my paintings act or care about each other,” Steers said in a 1994 interview. But the coronavirus has made the consoling in extremis intimacy that he depicts nearly impossible.

Standing before Cory Arcangel’s “/roʊˈdeɪoʊ/ Let’s Play: HOLLYWOOD” (2017-21) at Greene Naftali, I found myself wondering “why?” The work marks the debut, in the artist’s words, of a “Deep-Q machine learning super computing system which can play, and learn as it plays, opened ended RPG games” — in other words, a highly intelligent computer that can navigate video games with objectives more vague than winning.

For his show “Century 21” Arcangel, a multimedia artist whose conceptual throughline is technology, has trained it on the video game “Kim Kardashian: Hollywood,” in which players try to become famous. On a large screen, I watched a character with a blond faux hawk and goatee hang around in the Los Angeles airport, while colored boxes and lines of emoji code flickered around him. It was boring, not unlike viewing Warhol’s eight-hour film of the Empire State Building. The /roʊˈdeɪoʊ/ command center — monitors, processors and wires — was arranged on a nearby pedestal.

Why build such a sophisticated system, only to run it through such a vapid game? This question gets to the heart of Arcangel’s art. For his iconic entry in the 2004 Whitney Biennial, he stripped “Super Mario Brothers” of every element except the clouds. With Arcangel, “why?” tends to prompt “why not?,” which leads to a deeper inquiry into how we relate to digital media and contemporary culture. At his best, he gives us a new perspective on our own habits of consumption.

He doesn’t always get it right. The video installation “elleusa, equinor, equinox, etrade_financial” (2020) shows a bot liking every post by these Twitter accounts, which is less insightful than banal. Arcangel is sharper when he’s funny, as in “we deliver / the king checked by the queen” (2020), which features two bots playing chess via comments on corporate Instagram accounts. The intervention has a quiet absurdity that makes it feel both disruptive and like a satisfying joke.

Lucas Blalock’s new show, “Florida, 1989,” is named for two events that marked his childhood. When he was 10 years old, his right thumb was severed in an accident at Disney World; and shortly afterward, in an experimental procedure, doctors replaced it with his own big toe.

The date isn’t the least of it. In his early 40s, Blalock is very much a photographer of his generation — not fully immersed in the fantastical possibilities of digital image manipulation, but not so worried, either, about what those digital fantasies might say about the medium. For him, Photoshop is just one more available tool to be used in constructing large, beautiful, and often confounding still lifes. In “Haunted Hearth (Witchcraft Advertisement)” (2017-20), a close-up of a stone fireplace at a tacky hotel, he alters the color of the grout and adds in an extra, floating stone, along with its shadow; for “Blep” (2020), he stuck a lifelike plastic tongue into the mouth of a toy tiger but used no special effects at all.

That dismembered and repositioned tongue isn’t the only visual allusion to the artist’s own missing digit. There are finger-size wooden clothespins overlaid with finger-size black lines, and, in the show’s standout image, “Reverse Titanic/Hell Is in the Air” (2019), two severed plastic fish heads are locked in a curious embrace. But the real affinity between Blalock’s formative injury and his work is in the overall tone: Like a freakish accident, or a singular trauma, his images are almost too strange and vivid to be made sense of. They must simply be taken as facts.