CHICAGO — The temptation to push the envelope, even a little bit, to help deliver the Mets’ first series win on the road in more than two months is not lost on Manager Mickey Callaway.

Given everything that has transpired in recent days, and throughout the season, the notion of Callaway’s doing everything in his power to bolster his team’s chances of winning is certainly understandable. But even with the most routine managerial decisions — such as holding two of his best hitters out of the lineup for a day game on a Sunday, or his bullpen management late in the game — Callaway is choosing to hold firm.

“You have to have a plan,” Callaway said before Sunday’s 5-3 loss to the Cubs at Wrigley Field. “If you deviate from that plan, you have to have good reasons.”

When Brodie Van Wagenen was hired as general manager in October, he made it clear that his intention was to build a team that would win now. But heading into Philadelphia for a four-game series against the Phillies that begins Monday, the Mets have struggled to live up to expectations. Injuries have left the team playing without Noah Syndergaard or Jeurys Familia, and the Mets, mired in fourth place in the National League East, have been unable to start trending in the right direction.

That continued Sunday as the Mets were unable to capitalize on a nine-strikeout effort by Jacob deGrom, thanks to Seth Lugo’s surrendering a go-ahead, three-run homer to Javier Baez in the eighth inning on the 42nd pitch of his appearance.

The loss meant the Mets had to settle for a series split rather than clinching their first road series victory since they swept the Marlins in early April.

“It’s a tough loss today, but we play again tomorrow,” deGrom said. “We definitely would have liked to come in here and win a series. We just weren’t able to.”

Already tense about being questioned about his decision to stick with Lugo for such a long stretch, Callaway had harsh words for a reporter while journalists were waiting for Edwin Diaz, the Mets’ closer. After the reporter told Callaway he would see him Monday, Callaway lashed out with an expletive-filled response. Callaway eventually asked a team official to have the reporter removed from the clubhouse.

Jason Vargas, a starting pitcher, then threatened the reporter, saying he would knock him out. No punches were thrown, and a group of reporters left the room.

Shortly after the game, the Mets issued a statement about the incident.

“The Mets sincerely regret the incident that took place with one of our beat writers following today’s game in the clubhouse,” the statement read. “We do not condone this type of behavior from any employee. The organization has reached out and apologized to this reporter and will have further discussions internally with all involved parties.” 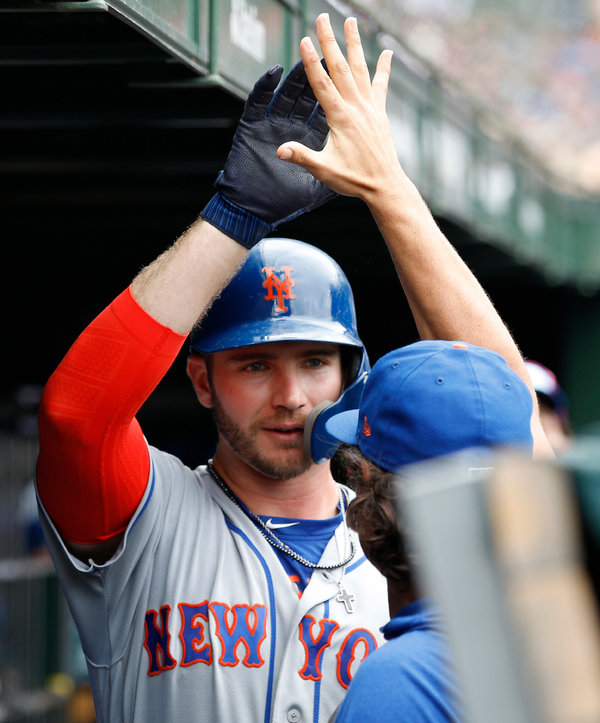 The loss dropped the Mets (37-41) to four games under .500 and ended a meager two-game win streak. That came after the Mets had dropped four of five games last week, prompting Van Wagenen to fire the pitching coach, Dave Eiland, and the bullpen coach, Chuck Hernandez.

After Sunday’s setback, Lugo admitted to not executing pitches, including the 0-2 slider he hung to Baez on the decisive three-run blow.

Callaway defended his decision to stick with Lugo, who allowed a single and a walk in his second inning of work before Baez came to the plate. Asked about the possibility of seeking five outs from Diaz, Callaway said he would have gone to Diaz in the ninth if the Mets had still had the lead.

“We’re not going to use him for five outs,” Callaway said after being asked the same question in various forms.

Before Sunday’s eighth-inning bullpen failure, it appeared that the Mets’ good fortunes of the previous few games would continue. Pete Alonso hit his 27th home run of the season, which broke the franchise record for home runs as a rookie that Darryl Strawberry had set in 1983. Tomas Nido also homered, and deGrom delivered a run-scoring single that temporarily gave the Mets a 3-2 lead.

DeGrom lasted one more inning on the mound, with Callaway characterizing his ace as “gassed” after six innings in which he allowed eight hits and two earned runs.

Sunday’s loss came in a stretch of 18 consecutive days in which the Mets have a scheduled game. Alonso, showing some veteran know-how, spoke to the importance of getting past Sunday’s loss as the Mets prepared to face another tough series.

“Some guys take it harder than others, but collectively as a group, it doesn’t matter how hard or soft you take it,” Alonso said. “We just need to come out tomorrow and be locked in and ready to play. It’s as simple as that.”

Asked to assess which way the Mets have been trending, Callaway moved his hand across an invisible horizontal plane.

“We’re not trending at all, really,” Callaway said. “We’re just kind of staying there. We’re like 5-5 every 10 games, and we’re waiting for that moment where we start to break out and get everything clicking.”