The stars were out in force to watch the men’s quarter-finals and superstar doubles at Wimbledon 2019 on Wednesday.

And leading the way into the All England Lawn Tennis and Croquet Club in south London was supermodel Twiggy, 69, accompanied by a host of celebrated veteran famous faces.

The 60s icon stood out from the crowd in a clashing red and pink suit as she arrived arm-in-arm with her long-term partner.

Leading the way: The stars were out in force on Wednesday to watch the men’s quarter-finals and superstar doubles at Wimbledon 2019, with Dame Twiggy, Dame Shirley Bassey, Elaine Paige and Sir Michael Parkinson (from left to right) leading the star-studded arrivals

Twiggy looked fashionable as ever in her red blazer, the pink lining matching her high-waisted trousers, cinched in thanks to a scarlet belt.

Day nine of Wimbledon will see all the major players including Roger Federer, Rafael Nadal, Andy Murray and Serena Williams take to the court.

Defending champion Djokovic is kicking off proceedings against Belgium’s David Goffin before Federer battles it out against Kei Nishikori on Centre Court.

Over on Court One, Rafael Nadal will be taking on the United States’ Sam Querrey in the final men’s quarter-final.

With no Brits left in the singles draws, Andy Murray is flying the flag in the mixed doubles. 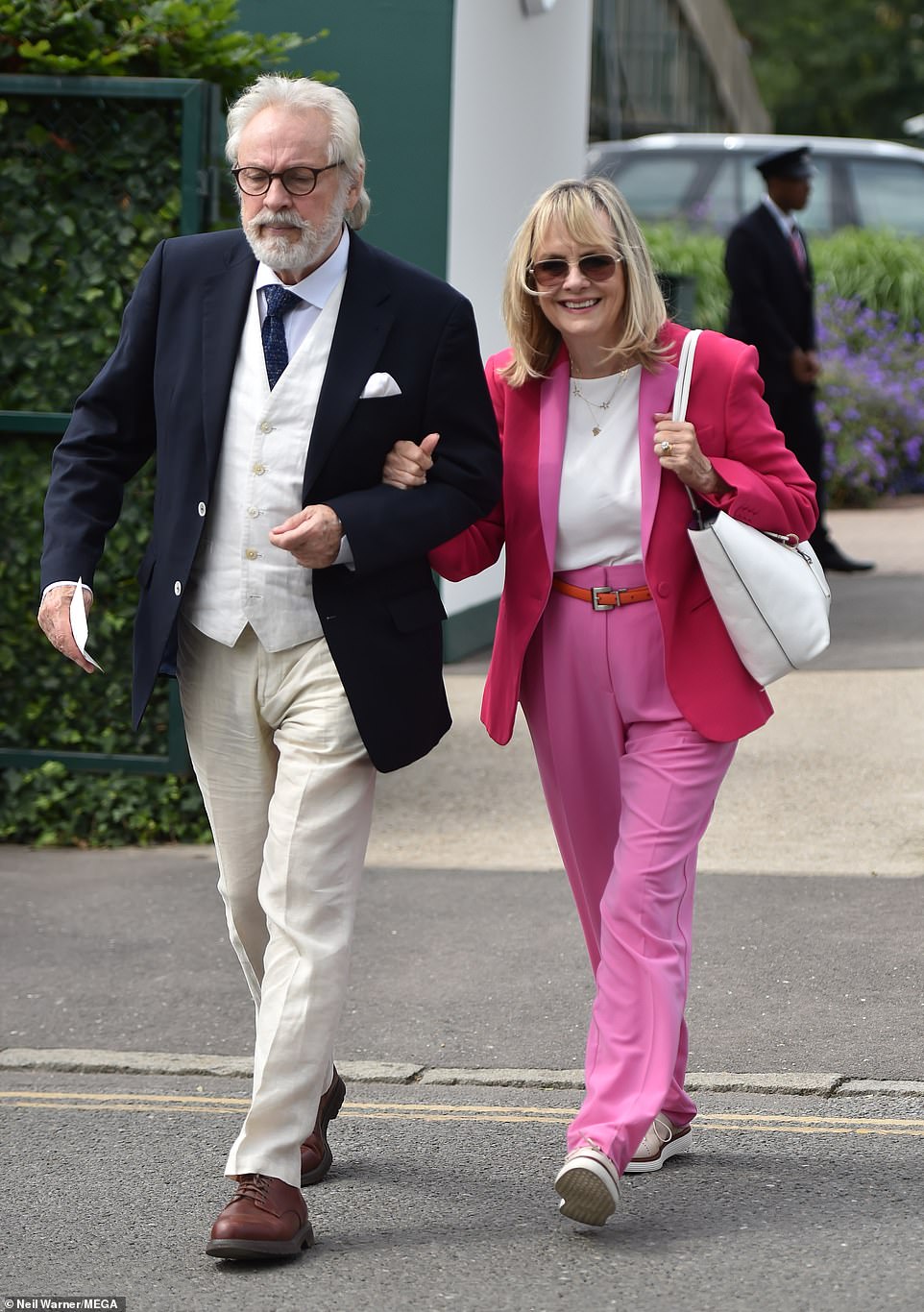 Arm-in-arm: Twiggy looked fashionable as ever as she arrived alongside husband of 30 years, Allan Leigh Lawson 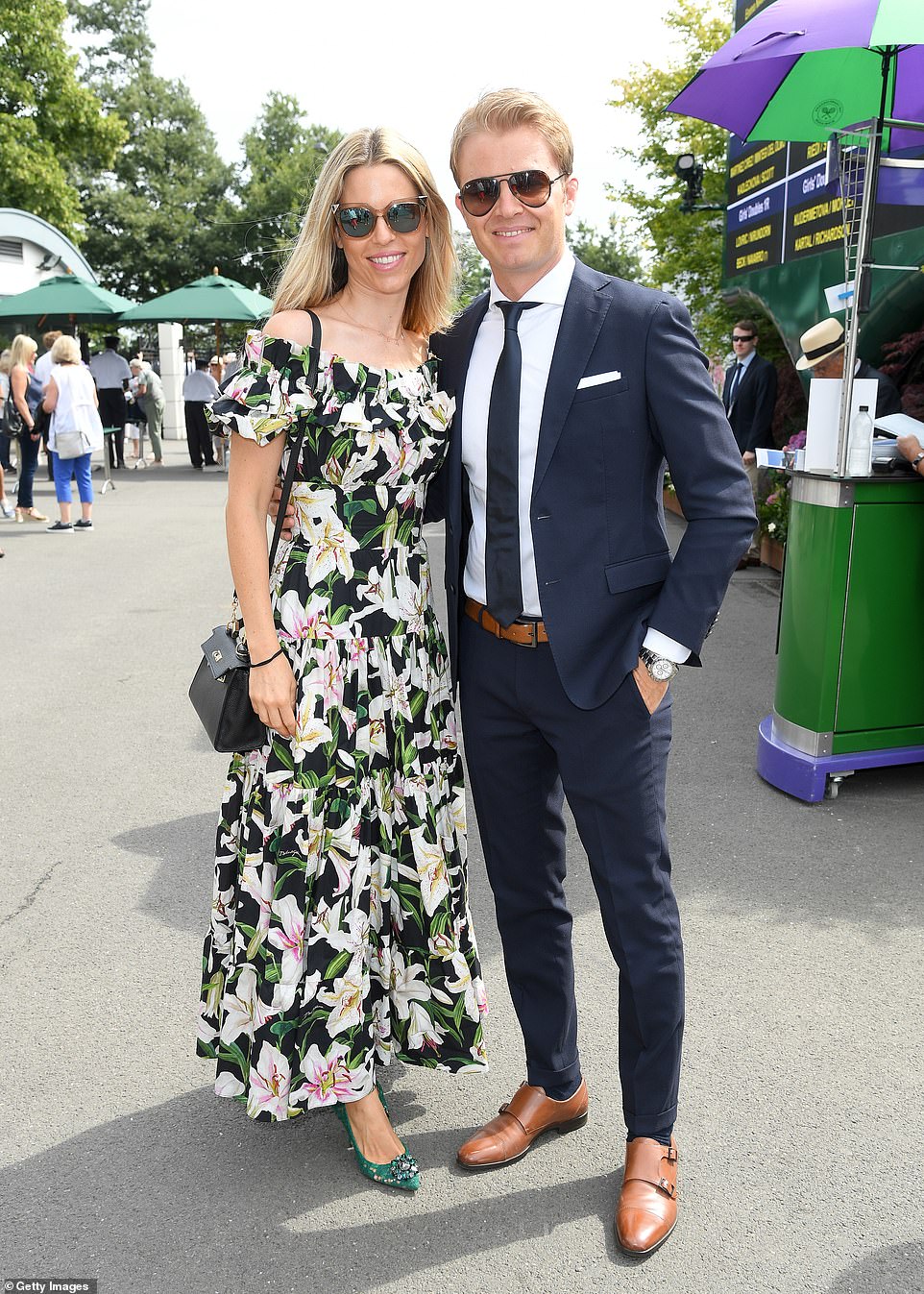 Arm-in-arm: Formula One superstar Nico Rosberg was in attendance alongside his glamorous wife Vivian Sibold 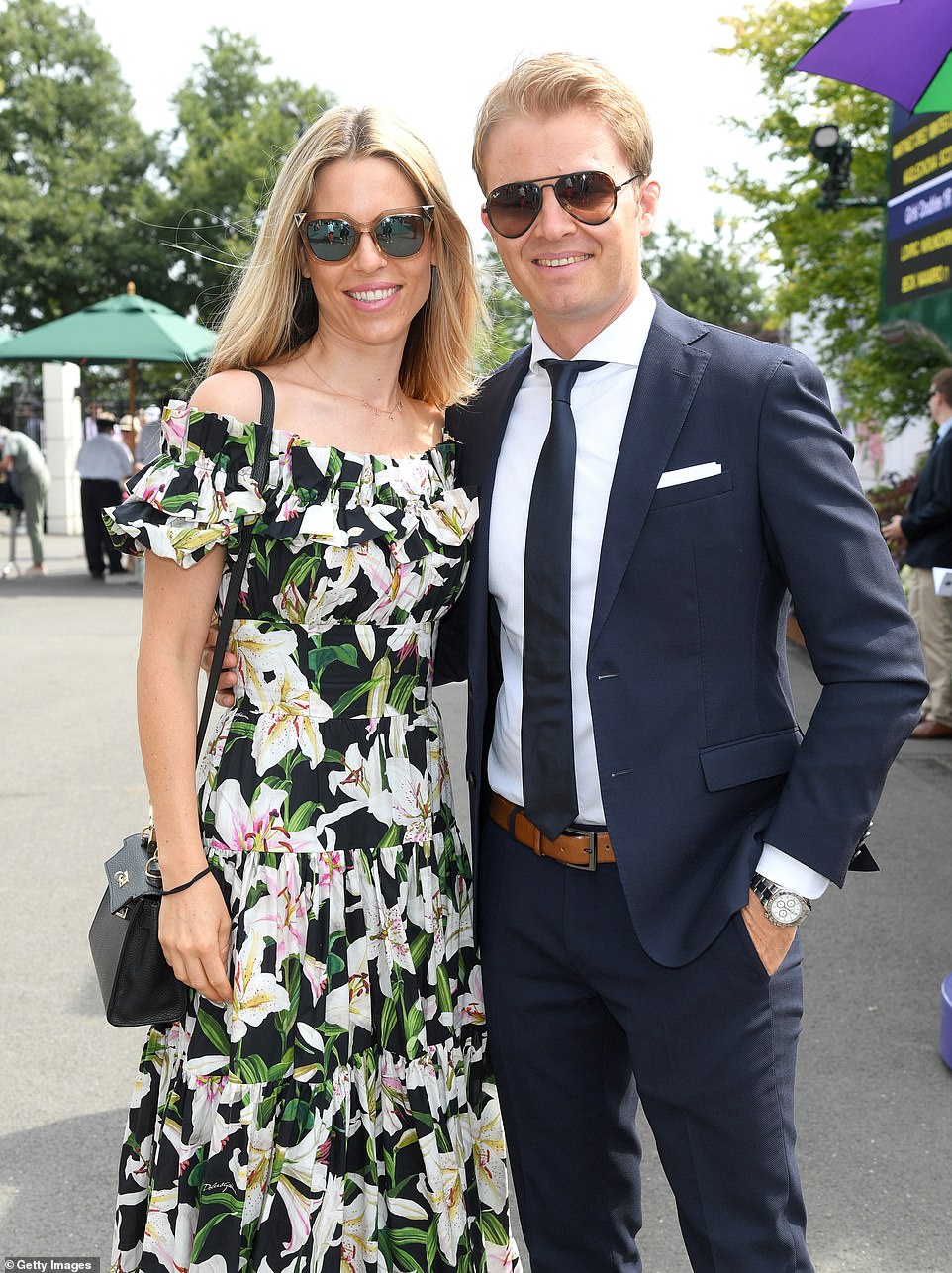 Elegant: Vivian was looking lovely in a floral print frock with a pretty ruffled neckline, accessorising with cat eye shades

The highlight of the day will undoubtedly be Murray’s hotly-anticipated match with Serena Williams against Bruno Soares and Nicole Melichar.

The star has been wowing the Wimbledon crowds with her double act Andy, who is returning to the sport via doubles after hip surgery.

Murray revealed Serena should ‘absolutely’ be given an honorary damehood if she brings home Wimbledon doubles glory.

Dapper chap: James Norton was suited and bootes, throwing on a salmon pink suit for the occasion 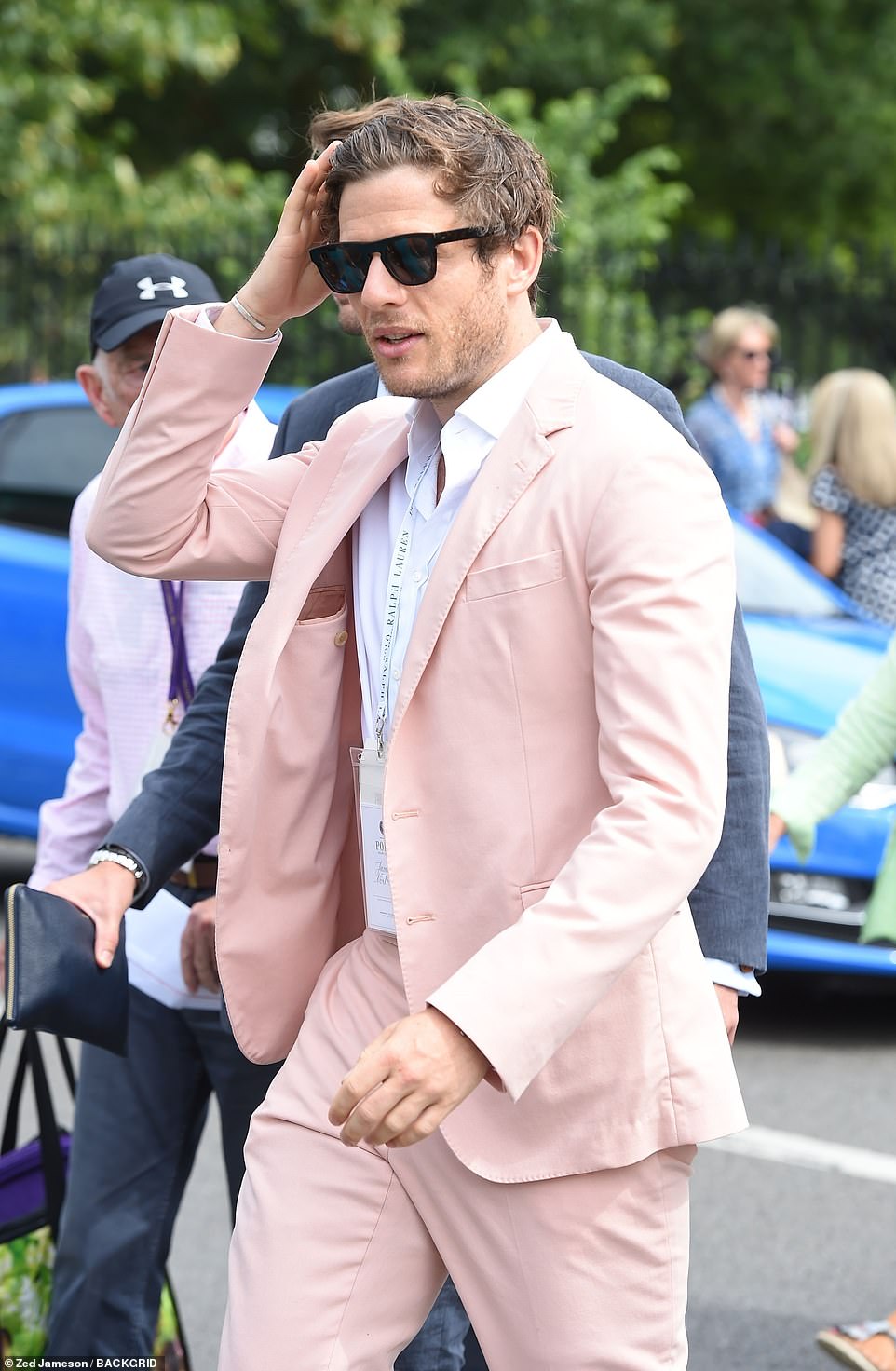 Suave: James ran his hand through his hair as he arrived at the tennis club, looking cool in a pair of shades

Riding high on their second-round victory against Raquel Atawo from the US and France’s Fabrice Martin, he revealed she had been making him laugh on the court.

Winning 7-5, 6-3 in front of a thrilled Centre Court crowd, they have proved that their super coupling is much more than just a gimmick and are firm contenders for the title.

There’s been some debate over whether their team name should be ‘SerAndy’ or ‘MuRena, with the American superstar favouring the latter.

‘I think Serena is the boss so whatever she says goes’, Sir Andy said.

Ladylike: Elaine Page (L and R) was looking glamorous in a blue lace dress, while Lady Helen Taylor (centre) was on-trend in a green floral number complete with white trainers 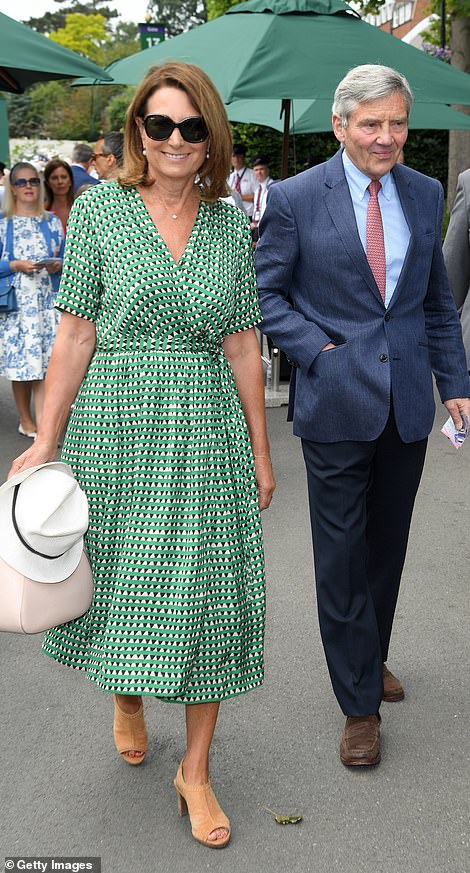 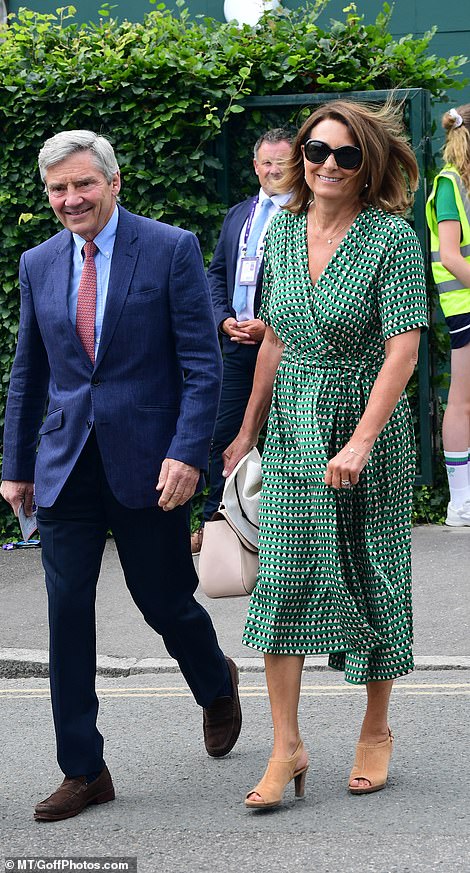 Date: The Duchess of Cambridge’s parents, Carole and Michael Middleton, were also seen arriving at the tennis