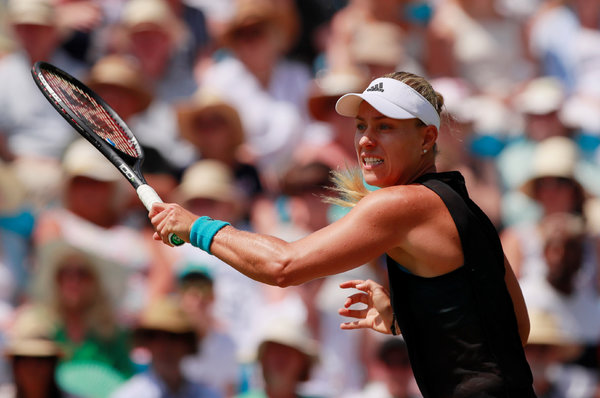 Ashleigh Barty, Angelique Kerber and Dominic Thiem are among those in action on the second day of the tournament.

Kerber, the defending women’s singles champion, will play on Centre Court at 8 a.m. Eastern. The No. 5 seed, Kerber reached the final at Eastbourne last week, but lost to Karolina Pliskova in straight sets. Maria reached the semifinals of the Nottingham Open two weeks ago, but she will be the underdog against Kerber, a three-time Grand Slam champion.

Thiem, the runner-up at the last two French Opens, lost in the first round of Wimbledon last year, and now he must face Querrey, whose style of play is more suited to the grass courts at the All-England Club, where he reached the quarterfinals in 2016. Thiem will be looking to keep the ball low and exploit the short angles to prevent Querrey from setting up shots that allow him to come to the net.

Barty, the new world No. 1, will be looking to build on her success this year. She spent only 12 weeks in the top 10 before rising to the top spot, winning the French Open on clay and the Birmingham Open on grass in the last month. Zheng, a runner-up in women’s doubles at the French Open this year, enters the tournament ranked 43rd in singles. Zheng will almost certainly struggle against Barty, whose low slices and excellent net play will work quite well on the grass at Wimbledon.

Cilic, the 2014 United States Open champion, was the runner-up at Wimbledon two years ago. His first match this year will be against another grass- court specialist: Mannarino has reached the round of 16 in his last two Wimbledon appearances, and he won his first tournament of the year on grass, the Libema Open in the Netherlands. Cilic is aiming to return to form after an early loss at the Queen’s Club Championships led to his dropping out of the top 15 for the first time in five years.

For Fognini, the world No. 10, Wimbledon will be his first grass court tournament this year. He had a successful season on clay, winning at Monte Carlo and reaching the round of 16 at the French Open. Tiafoe started the year well, reaching the quarterfinals at the Australian Open before languishing through the clay-court season. He was ill at the French Open and lost in the first round, and he hasn’t done well in his two grass court tournaments since then. To have a chance against Fognini, he will need to find his form quickly.