Zack Snyder’s newest film, Army Of The Dead, is all any action-film buff can talk about right now—and it’s not hard to see why. The so-called “zombie heist film” follows a group of mercenaries as they venture into a Las Vegas quarantine zone to recover a $200 million dollar vault. The catch? The quarantine zone is full of a scary-ass zombie army that takes absolutely no prisoners.

The ruthless undead are ruled by a king, Zeus, and his queen, who are absolutely terrifying in the film. But the actors behind the layers of makeup couldn’t be more stunning.

“It took a lot of prosthetics and makeup to make this gruesome twosome look so royally terrifying,” a recent YouTube video by Netflix outlines. “But beneath their rotting exteriors, the actors portraying Zeus and the queen are actually quite gorgeous.” 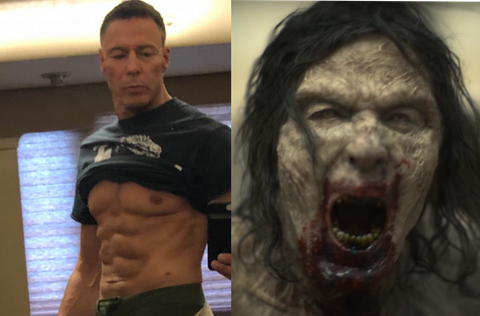 Zeus is played by actor and stuntman Richard Cetrone, who is no stranger to Zack Snyder films. In fact, according to Netflix, he’s had a role in every live-action film Snyder has directed. Notably, he was Ben Affleck’s stunt double in Batman vs. Superman: Dawn of Justice and Justice League. He’s also been a stuntman in several Marvel films, including Iron Man, Thor, and Captain America: Civil War. Not only that, but he’s worked on Buffy the Vampire Slayer, Sleepy Hollow, and The Mandalorian. Not bad. 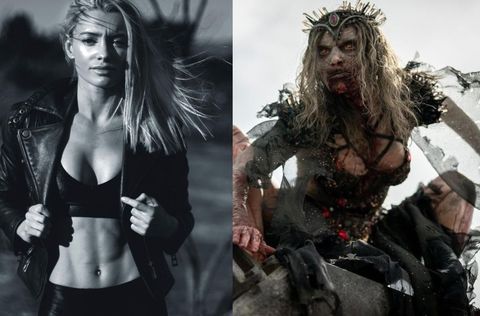 The queen, on the other hand, is portrayed by Athena Perample, who has extensive dance and gymnastics training that is evident in her royal role. You may not expect it from the gruesome monster queen, but Perample’s first notable screen role was as a cheerleader on Glee. She was also previously a dancer for the Los Angeles Clippers, if you can believe it. Perample has also done stunt work on several popular TV series, including Legion, Euphoria, and Animal Kingdom. Most recently, she was a stunt double for Kat Dennings and Kathryn Hahn on Marvel TV series WandaVision.

Now that certainly gives you a different perspective on the spine-chilling undead royalty.