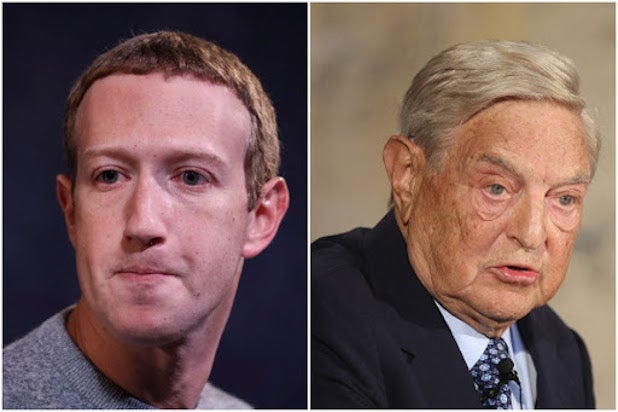 Billionaire investor George Soros ripped Facebook CEO Mark Zuckerberg in a letter to the Financial Times, suggesting the tech exec is engaged in a quid pro quo with President Trump. Soros, who is well known for donating to liberal causes, also called for Zuckerberg and Sheryl Sandberg, Facebook’s chief operating officer, to be “removed” from controlling the company.

“Mr. Zuckerberg appears to be engaged in some kind of mutual assistance arrangement with Donald Trump that will help get him to get re-elected,” Soros wrote in his letter to FT, published Monday.

Soros did not expand on his claim, but it comes a month after the president said Zuckerberg, during a recent dinner, told Trump he was “number one on Facebook.” Trump’s campaign ran a well-crafted Facebook ad strategy during the 2016 presidential election — something Facebook employees later said was “more complex” than Hillary Clinton’s digital efforts.

Zuckerberg has been slammed in recent months by several Democratic hopefuls for the White House, including Joe Biden and Elizabeth Warren. It’s a far cry from 2012, when Facebook was looked at as an advantage for Democrats, helping to drive young voters to the polls in favor of President Barack Obama.

It’s also worth pointing out Trump has been lapped by Michael Bloomberg when it comes to Facebook spending; The former New York City is now spending six times as much as Trump on Facebook ads.

Another concern for Soros was Facebook’s decision to continue not fact-checking its political ads — something that’s drawn the ire of several left-leaning pundits and politicians of late. Zuckerberg has said the company doesn’t want to police political ads, preferring to let its users decide what is and isn’t true.

“What I believe is that in a democracy it’s really important that people can see for themselves what politicians are saying, so they can make their own judgments,” Zuckerberg said in December. “I don’t think that a private company should be censoring politicians or news.”

This, according to Soros, isn’t a compelling reason to not fact check political ads.

“Therefore, I repeat my proposal, Mark Zuckerberg and Sheryl Sandberg should be removed from control of Facebook. (It goes without saying that I support government regulation of social media platforms),” Soros concluded.