The Oklahoma City Thunder have traded away the last pillar of their 2012 N.B.A. finals team by agreeing to a deal Thursday night that will reunite Russell Westbrook and James Harden as Houston Rockets teammates.

In the latest blockbuster transaction of a wild N.B.A. off-season, Houston swapped four high-quality draft assets and the former All-Star guard Chris Paul for Westbrook, who played with Harden for three seasons in Oklahoma City.

“We’re excited to have Russell Westbrook,” Tilman Fertitta, the Rockets owner, told Fox 26 in Houston. “I would watch him play for Oklahoma City, and he’s so athletic. At the same time this franchise just had the two years with the most wins it’s ever had in consecutive years, and we wouldn’t have accomplished that without Chris Paul.”

Houston and Miami appeared to be the most likely trade destinations for Westbrook after Oklahoma City traded the All-Star swingman Paul George to the Los Angeles Clippers last Friday. But Westbrook preferred the Rockets, according to one person who was briefed on the situation but was not authorized to discuss it publicly.

The ability of Harden and Paul to form an effective pairing was widely questioned when the Rockets acquired Paul before the 2017-18 season, and skepticism about the Harden-Westbrook reunion is likely to be even louder, given how much both players like to operate with the ball in their hands. Harden, however, has apparently convinced Rockets management that he and his former Thunder teammate can share the ball and the shot load sufficiently to make a resurrected partnership work.

“I think it’ll be very interesting and fun,” Fertitta told Fox 26. “James and Russell wanted to play together.”

Harden did not get the ball nearly as much in Oklahoma City as he has during his seven seasons in Houston. He was essentially the Thunder’s third option — behind Westbrook and Kevin Durant — on the best team in franchise history. All three players went on to win the N.B.A.’s regular-season Most Valuable Player Award — Durant and Westbrook in Oklahoma City, Harden in Houston — but the Thunder remain in search of their first championship. 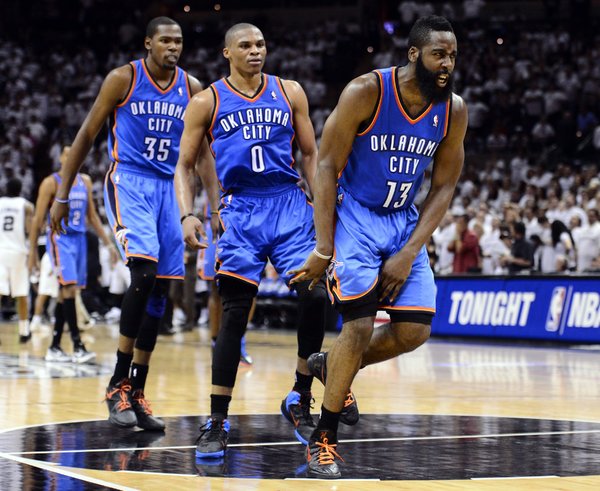 The full trade, as confirmed by two people with knowledge of the deal, will send Houston’s first-round picks in 2024 and 2026 to the Thunder, who will also have the rights to swap first-round picks with the Rockets in 2021 and 2025. ESPN first reported that the teams had reached agreement on a trade.

By virtue of three trades by the Thunder — most notably the George deal — the team has acquired eight future first-round picks since June 20, the day of the draft, and fully embraced a rebuilding project for the first time since the franchise moved to Oklahoma City from Seattle in the summer of 2008. It is also possible that the Thunder will use some of their newly acquired draft picks as a sweetener in a potential follow-up trade to move Paul.

Paul has played for a team in Oklahoma City before, when the New Orleans Pelicans (then known as the Hornets) were displaced by Hurricane Katrina for the bulk of the 2005-06 season. Yet it remains to be seen how Paul, 34, will embrace this trade given that the Thunder are unlikely to be in title contention during the three years remaining on his contract (valued at nearly $125 million).

The Rockets spent much of June rebutting reports that Harden and Paul no longer wanted to play together after the Rockets’ second-round playoff elimination by the Golden State Warriors. Adding to the reported tension, talks on a contract extension between the Rockets’ front office and Coach Mike D’Antoni have broken down multiple times since the team’s season ended, leaving D’Antoni with just one year remaining on his contract entering next season.

“I said at the end of the year we’re never going to stand pat,” Fertitta said in his television interview. “We’re always going to try to get better. I think this makes us a better team. I hate to lose Chris Paul, but we felt like we did what we had to do to become a better team.”

Since Harden and Westbrook last played together in 2011-12, both have flourished individually. Harden, now 29, was named M.V.P. in 2018 and has been a top-five finisher in the award’s balloting four other times. Westbrook, 30, won M.V.P. honors in 2017 and has averaged a triple-double in each of the last three seasons — something no player had achieved since Oscar Robertson in 1961-62.

The Rockets have restored the partnership in hopes of finally winning a championship after being stymied in the Western Conference by the Warriors’ dynasty. Houston was eliminated from the playoffs by Golden State in four of the last five seasons. In this deal, though, Houston has most likely committed to paying $47 million to Westbrook in the final season of his current contract — 2022-23.

Westbrook’s exit from Oklahoma City means that six of the 15 players who earned all-N.B.A. honors for their play in 2018-19 have switched teams since Toronto defeated Golden State in the N.B.A. finals.

Marc Stein is a sports reporter specializing in N.B.A. coverage, with occasional forays into soccer and tennis. He spent nearly 15 years at ESPN before coming to The Times. @TheSteinLine • Facebook

Benjamin Hoffman is a senior staff editor and regular contributor to the Keeping Score column in sports. He joined The Times in 2005. @BenHoffmanNYT • Facebook