Priyanka Chopra has been seen getting back to work on her upcoming film Text For You, days after she sparked a furore when being seen at a hairdressers.

The actress, 38, has insisted she wasn’t breaking any Covid rules when she went to the Josh Wood Colour salon in Notting Hill, with police later coming to the salon.

And it appeared that she was putting the drama behind her as she wrapped up warm in a long black jacket and focussed on the shoot in London on Friday. 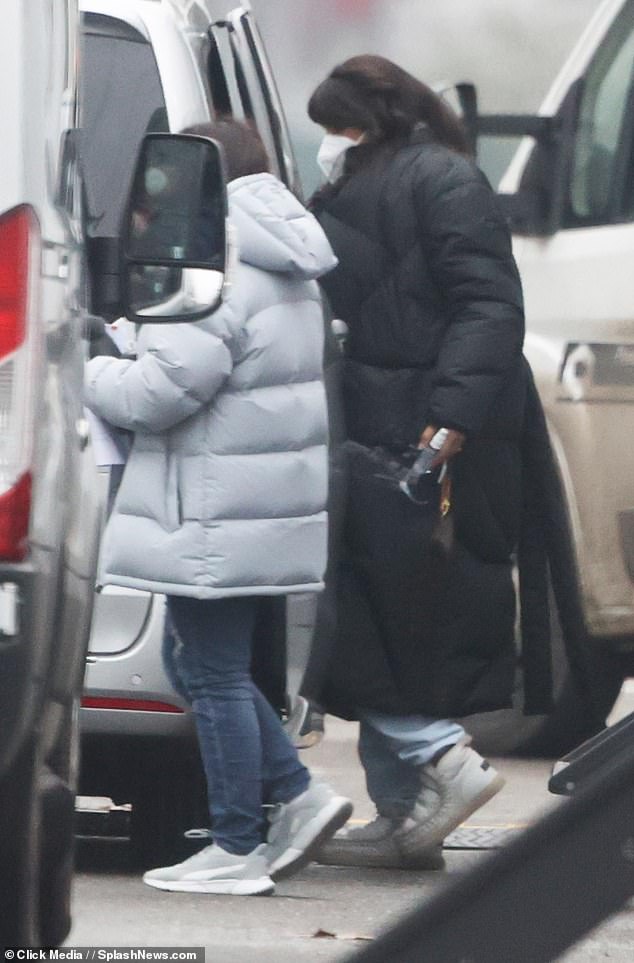 Back to work: Priyanka Chopra cut a casual figure as she got back to shooting new movie Text For You on Friday after insisting she wasn’t breaking any Covid rules when she went to the Josh Wood Colour salon in Notting Hill on Wednesday

Priyanka kept her head down as she walked towards a car with another woman while bundled up in her warm winter jacket and tracksuit bottoms.

She continued her relaxed look with a pair of white trainers, which appeared to be the same ones from her trip to the salon, and wore her long locks down.

The star also ensured to stay safe amid the pandemic as she wore a white face mask while working on the film. Other crew and actors on set were also seen donning the same style of coverings.

The actress was seen by police officers after they found her attending an appointment at the Josh Wood Colour salon in Notting Hill on Wednesday. 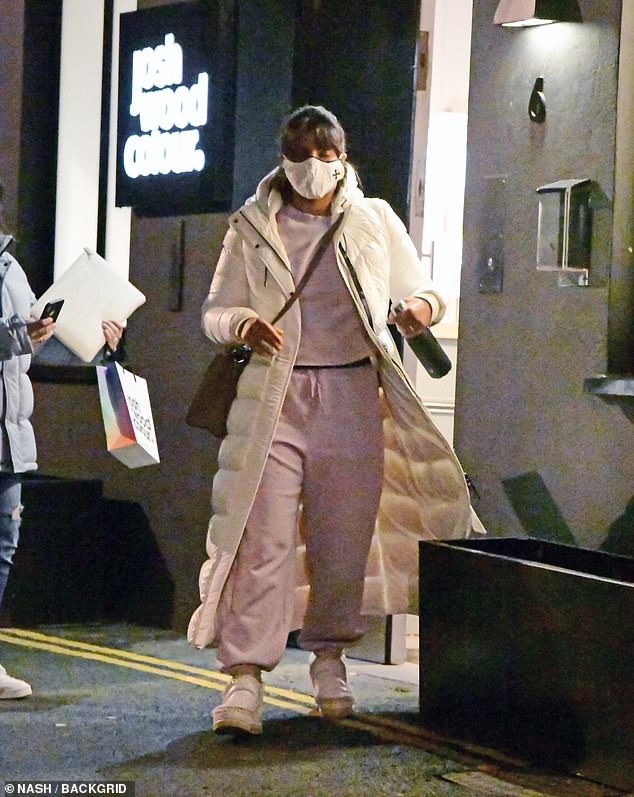 Furore: It comes after the actress, 38, insisted she wasn’t breaking any Covid rules when she went to the Josh Wood Colour salon in Notting Hill, with police later coming to the salon

It then emerged on Thursday that she had escaped a fine after showing police paperwork stating the hair colouring session was for a film.

A spokesperson for the actress said: ‘Following government guidance, Priyanka Chopra Jonas’ hair was coloured by Josh Wood for the purpose of the film she is currently shooting.

‘The salon was opened privately for the production and everyone involved had been tested and followed both the DCMS working guidelines and the film production regulations.

‘As per Film London and current government advice, by continuing to follow the approved COVID-19 guidance, Film and TV production can continue in the Capital and locations can continue to accommodate shoots and recces that are carried out in-line with the guidance.’ 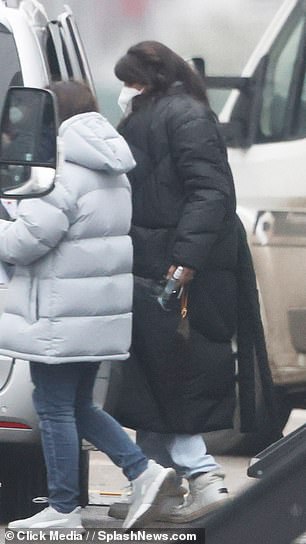 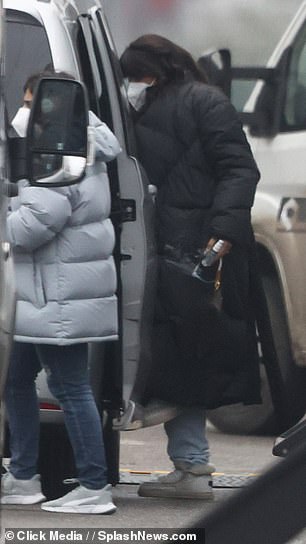 Keeping busy: She kept her head down as she walked towards a car with another woman while bundled up in her warm black winter jacket and tracksuit bottoms 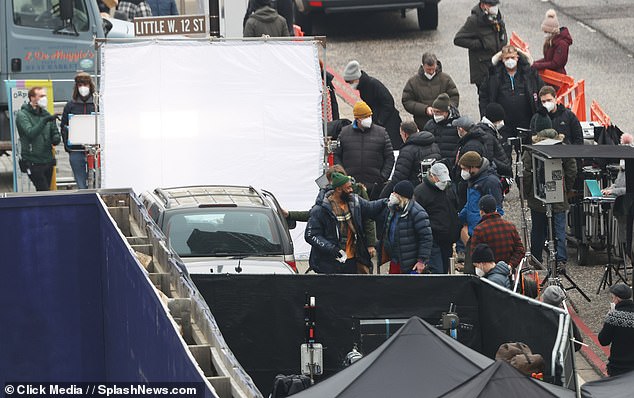 The shoot: Dozens of crew were seen working on the set while wearing facemasks during the shoot

Priyanka is currently living in London with her husband Nick Jonas, 28, and was pictured arriving at the shop alongside her mother Madhu before two police officers arrived in a squad car and appeared to order the customers out.

However the pictures sparked disbelief from members of the public who have been subject to increasingly tight lockdown rules.

Fans turned on the star on Thursday, questioning online if she thought she was above the rules.

One directly contacted her on Twitter, asking ‘Why are you and your mum pictured at a salon getting your hair done when it’s against the rules in the UK right now??!!

‘Why are the rules different for you, who do you think you are?’

While Sarah Nichols said: ‘Getting so fed up with “celebrities” thinking they don’t have to do this lockdown like the rest of us. 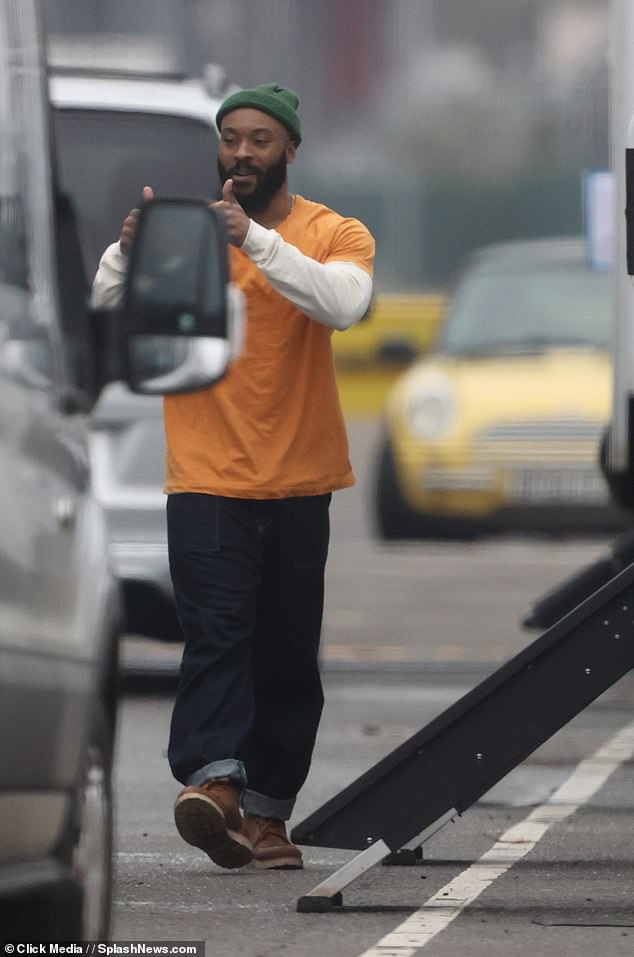 Having fun: Priyanka’s co-star Arinza Kene appeared to be in good spirits as he strolled around 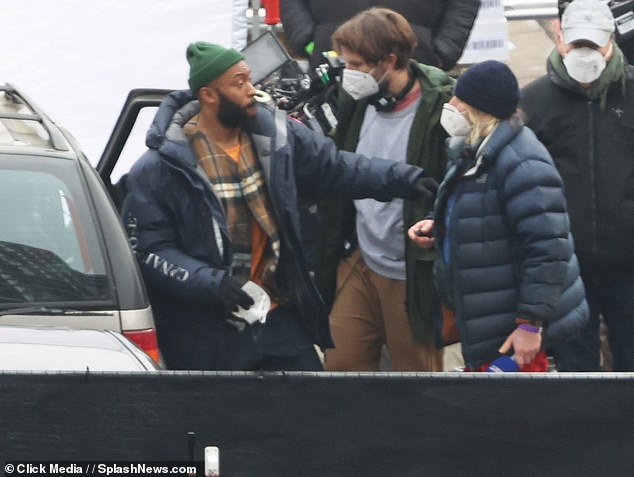 Coming together: The actor carried his facemask as he got out of a car and headed towards the set

‘Why should Priyanka Chopra be able to get her hair done. Why does some swanky London salon think it’s above the rules. GRRRRRRR’

Another added: ‘Why should Priyanka think she is above the law and flout the regulations? Selfish beyond belief. I hope Josh Wood her stylist gets £10k fine.’

A spokesperson for the Met Police told MailOnline: ‘Police were alerted at around 17:40hrs on Wednesday, 6 January to reports of a Covid breach taking place within a hairdressers on Lansdowne Mews, Notting Hill.

‘Officers attended and the owner of the salon was given a verbal reminder of the important need to comply with all regulations regarding Covid-19 and signposted to sources of advice. No fixed penalty notices were issued.’

On Monday, Prime Minister Boris Johnson announced that the UK was being plunged into national lockdown with immediate effect, meaning the visit was an apparent blatant violation of the rules, which state that business owners could be fined up to £10,000 for breaking the rules. 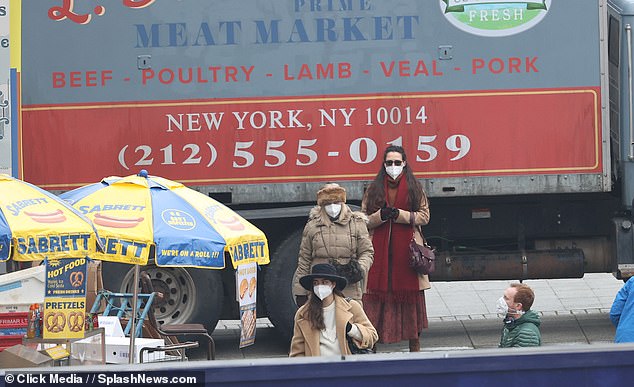 Transformed: The cast seemed to be filming a scene which was set in New York 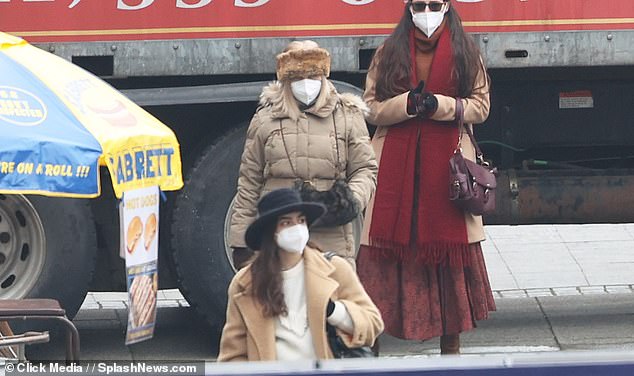 Strolling: Three women were seen walking along the road as a large truck sat at one end

Government guidelines on hair salons in lockdown state: ‘Personal care facilities such as hair, beauty, tanning and nail salons. Tattoo parlours, spas, massage parlours, body and skin piercing services must also close. These services should not be provided in other people’s homes’.

Despite the new rules, Priyanka still made her way to the salon. Before arriving, she wrapped up in a warm winter coat as she walked with her mother, who was walking along with Priyanka’s beloved dog, Diana, a chihuahua mix, that often features on her social media accounts.

When the pair, alongside an aide were inside the shop, the police arrived in their squad car and stood at the door speaking to those inside the salon, before Priyanka then headed out shortly with a bag of Josh Wood goodies.

On Monday, Britons were warned they ‘should expect more enforcement’ from police under the new lockdown. John Apter, chairman of the Police Federation of England and Wales, predicted there would be more fines handed out and less tolerance from officers as there are ‘no excuses’ for not knowing the rules this time. 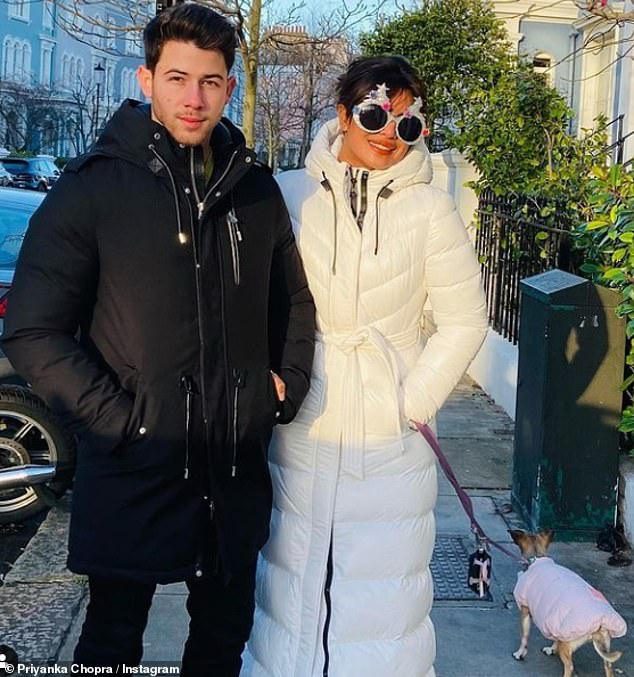 Couple: Priyanka and her husband Nick are currently living in London and spent Christmas in the city

But he also warned police could be cast as ‘villains of the pandemic’ as they bear the brunt of the public’s lockdown fatigue and frustration. Mr Apter said the record number of fines handed out on New Year’s Eve demonstrated that increasing numbers of young people were prepared to break the rules.

Hundreds of partygoers were slapped with fines of up to £10,000. Mr Apter said, after almost a year of enforcing Covid restrictions, many officers are ‘knackered’.

Priyanka and Joe are currently residing in the UK capital while she films Text For You, which the boy band star was seen filming a cameo for last month.

The stylist frequently colours Priyanka’s hair and in November, she shared a selfie whilst getting her hair styled by Josh with the caption ‘finishing touches’ while shooting her upcoming movie.

Text For You follows a young woman as she grieves the tragic loss of her fiancé and decides to send romantic messages to his old phone number.

As she does so, the woman begins to form an attachment to the man who the phone number was reassigned to, and who is also struggling with a similar heartbreak. The pair meet and can’t deny the connection they feel with one another, and decide to give love another chance.

Priyanka takes on the lead role in the film and stars in it alongside Highlander star Sam Heughan, while her other co-stars include Celine Dion, Russell Tovey, Arinzé Kene, and Omid Djalili.

The film is an English remake of the German film SMS Fur Dich, which itself is based on the novel of the same name by Sofie Cramer.