Miley Cyrus is still on a Super Bowl high after her electric performance at the TikTok Tailgate on Feb. 7! The singer shared a never-before-seen clip of her ‘pre-game turn up,’ which included an impromptu jam session to Twisted Sisters’ ‘I Wanna Rock’!

In the days after her TikTok Tailgate performance at Super Bowl LV in Tampa, Miley Cyrus is still reminiscing on her big gig. On February 9, the Grammy-nominated singer, 28 — who’s been sharing moments from Sunday’s festivities to Instagram — posted another clip that showed her jamming to the Twisted Sisters classic, “I Wanna Rock”. The black and white video shows an excited Miley arriving to the same stage she shared with music legend, Billy Idol during her Super Bowl performance.

Miley, who rocked her choppy, blonde mullet and sunglasses, stepped out in a tiny white crop top and baggy black trousers in the video. She bared her edgy arm tattoos and kicked her black boots in the air while singing to the 1984 track. Not long before that, the “Prisoner” singer prepared for her performance by exercising her vocals, while walking on a treadmill.

For the pre-show, the Tennessee native donned a sexy pink and black cheerleader outfit, which included a tiny sequin top and pleated skirt. Miley stayed true to the football theme, and even rocked pink knee pads. She eventually changed into a bedazzled jersey with football pads underneath and white pants — though, she still stomped around stage in her black stilettos. At one point, Miley told the crowd, “This is my first show in about a year and I could not image a better way to do this with all these healthcare heroes. We’re so appreciative of you and all your diligence.” 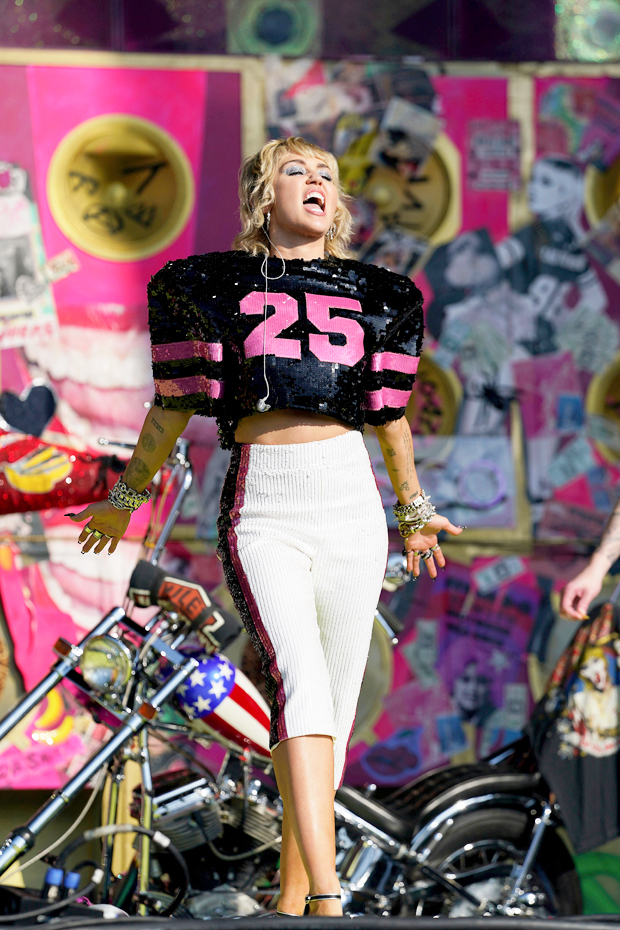 It’s been an already busy and exciting year for Miley, whose latest album Plastic Hearts is the No. 1 rock record in the country. She celebrated the major milestone in a post on Instagram, alongside a photo of herself rocking a green fur vest in front of Star Nails Spa. “You did it again! Plastic Hearts has spent 6 weeks as the #1 rock album in the country,” Miley wrote in the caption of her post, which was shared on January 20.