‘I don’t hear from anyone!’: Matthew Perry jokes that NONE of his co-stars call him after Lisa Kudrow gushes the cast still have a ‘very tight relationship’ on Friends: The Reunion

They all shot to fame after starring in one of the most successful sitcoms of all time and delighting viewers for 10 beloved seasons.

And Matthew Perry, who played Chandler Bing, has now joked that he ‘doesn’t hear’ from any of his former cast mates while appearing on Friends: The Reunion. 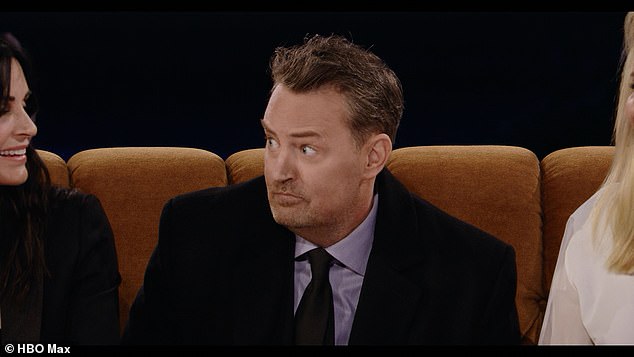 Joker: Matthew Perry has joked that he ‘doesn’t hear’ from any of his former cast mates while appearing on Friends: The Reunion

Speaking during the episode, Lisa reflected on how they’ve stayed pals since the show ended back in 2004.

Lisa told host James Corden: ‘We stay in touch for sure, maybe not every day but you know, we have such a bond from having done this show and forged this very tight relationship that any time you text or call someone, they’re gonna pick up.

James then turned to Matthew and cheekily asked: ‘Who doesn’t pick up the phone?’

Matthew seized the moment and hilariously replied: ‘I don’t hear from anyone!’ 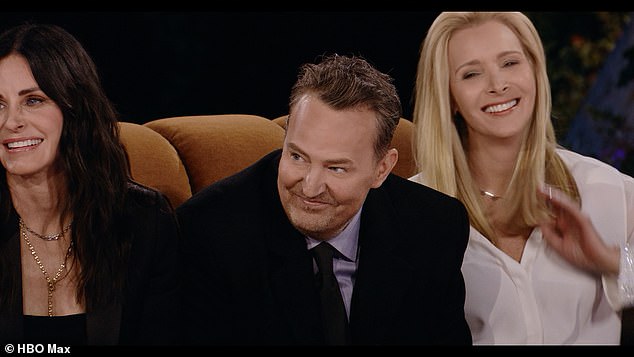 Good one: The actor, 51, who played Chandler Bing, got a big laugh out of his fellow stars after being quizzed by host James Corden

The rest of the cast burst out laughing at his funny jibe, with the actor putting on an animated display while his former cast-mates enjoyed the joke.

During the special, the cast reflected on their memories of the show and revisited some of the most infamous moments, including Lisa’s Smelly Cat tune.

It also comes as it was reported that Matthew Perry and Courteney Cox are said to be distant cousins – and they’re both related to Lady Gaga.

The pair are best known for portraying married couple Chandler Bing and Monica Geller in the sitcom. 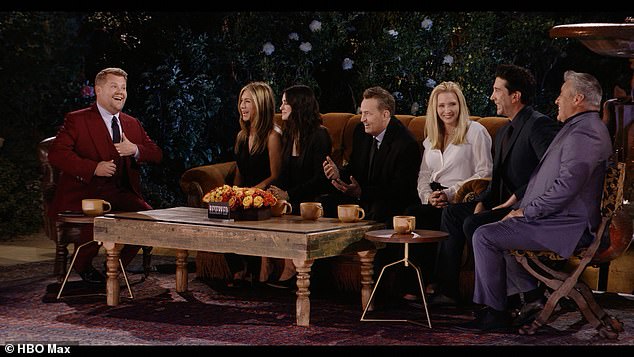 Back together again: Matthew, Courteney Cox, Jennifer Aniston, Matt LeBlanc, Lisa Kudrow and David Schwimmer all reunited for the HBO special which finally aired on Thursday 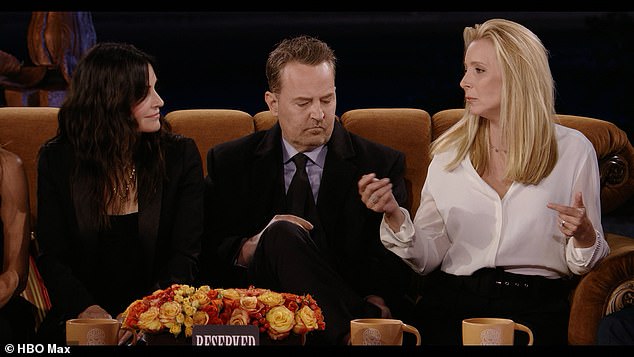 Sweet: Lisa gushed that the cast stay ‘touch for sure’ after building a ‘tight relationship’ on the sitcom which ran from 1994 to 2004

And according to researchers at genealogy website MyHeritage, the co-stars are 11th cousins and share distant relatives, William Osbern Haskell III and Ellen Haskell.

Roi Mandel, the head of research at MyHeritage, told CNN: ‘We went into this line very deeply, we checked every name. We found a lot of records that support it, and we have confidence that they are related.

‘This is not such a surprise. It makes sense that when you go so many generations back, the chances of people being connected are higher.’

William and Ellen were married and lived in England around 500 years ago, and she emigrated to the US in 1635 with her two sons, Roger and William. 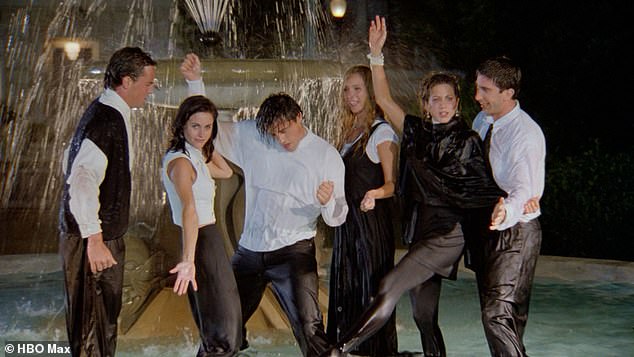 Huge success: Friends is one of most successful sitcoms of all time, running for 10 seasons and 235 episodes from 1994 to 2004, and fans had been clamouring for a reunion for many years

The research also found the ‘Friends’ stars are said to be distantly related to Gaga, who Courteney is known to be a fan of.

Chandler and Monica married in Friends’ seventh series, and the couple became parents in the last-ever episode. 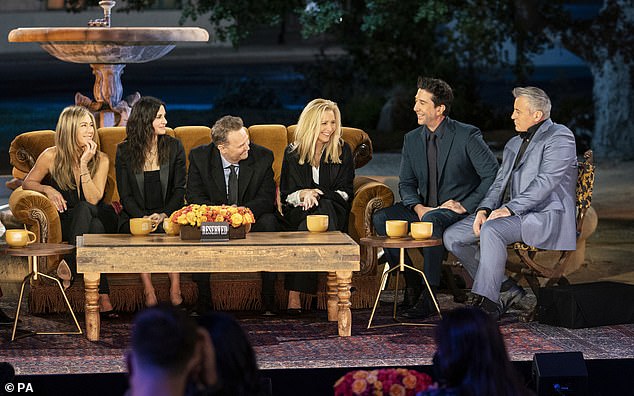 At last! The long-awaited Friends Reunion finally made its debut on Thursday, with the sitcom’s cast heading back to the iconic set to reminsce on the show’s history

The singer, 35, appeared delighted to be performing a duet with Lisa as she rocked out to the tune and gushed over the actress’ character, all while wearing a colourful ensemble which appeared to be inspired by Phoebe’s quirky style.

Not holding back, Lady Gaga belted out the lyrics while playing her guitar and sitting on the yellow coach next to Lisa who hilariously told Gaga she wasn’t ‘too bad’.

Starting off their segment, Gaga- real name Stefani Germanotta- asked: ‘Mind if I take Smelly Cat for a spin?’ 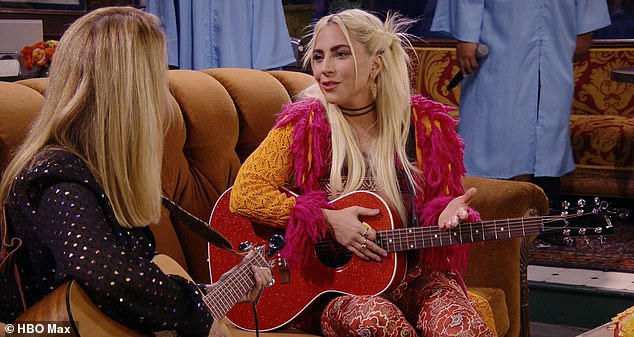 Getting involved: Lady Gaga also made a star-studded cameo, heading into Central Perk with a guitar in hand to perform the famous song Smelly Cat alongside Lisa

Lisa happily agreed and was left nodding after hearing the hitmaker’s impressive vocals on the first few lines, telling her: ‘Not bad… that was really, really good.’

The actress, who performed the fan favourite song several times throughout Friends’ run on TV, then took over the next few lines.

Adding an extra twist to the usually acoustic song, Gaga and Lisa were then joined by several gospel singers donning long blue robes for the final few lyrics.

Once the applause died down, Lisa delighted fans some more as she joked: ‘That was so great… I still think it’s better when it’s just me.’ 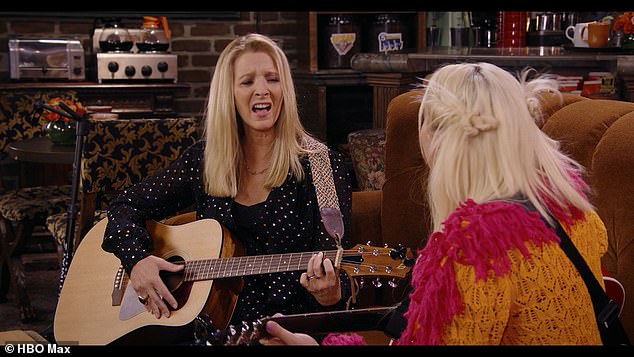 So good: The singer, 35, appeared delighted to be performing a duet with Lisa Kudrow as she rocked out to the tune 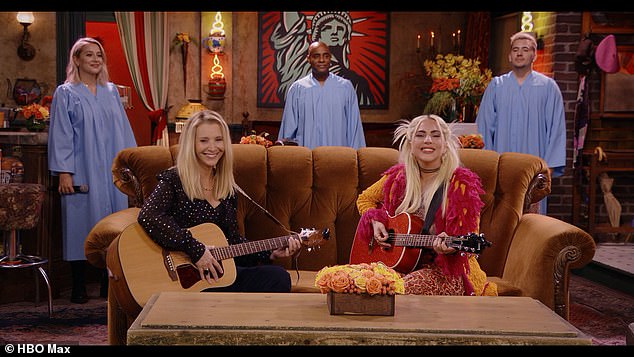 Guest appearance: The duo were even joined by a gospel choir as they recreated the fan favourite song on the yellow couch

And once their entertaining duet was complete Gaga took the opportunity to reflect on Friends and tell Lisa how important her character was.

She sweetly gushed: ‘Thank you for being the person for all of us on Friends who was, I’m not sure if this is the right way to say it, but the different one or the one who was really herself.’

Director Ben Winston previously told Variety: ‘I said to Lisa, ‘Would you be prepared to sing it?’ and she was like, ‘Yeah, that would be fun.’

‘We went through a few names and we both agreed that Gaga, if we could get her, would be the ultimate one because she associates with and feels close to Phoebe in so many ways, as Gaga says on the show.

‘That was a really beautiful moment, and Lady Gaga jumped at the chance to do it.’ 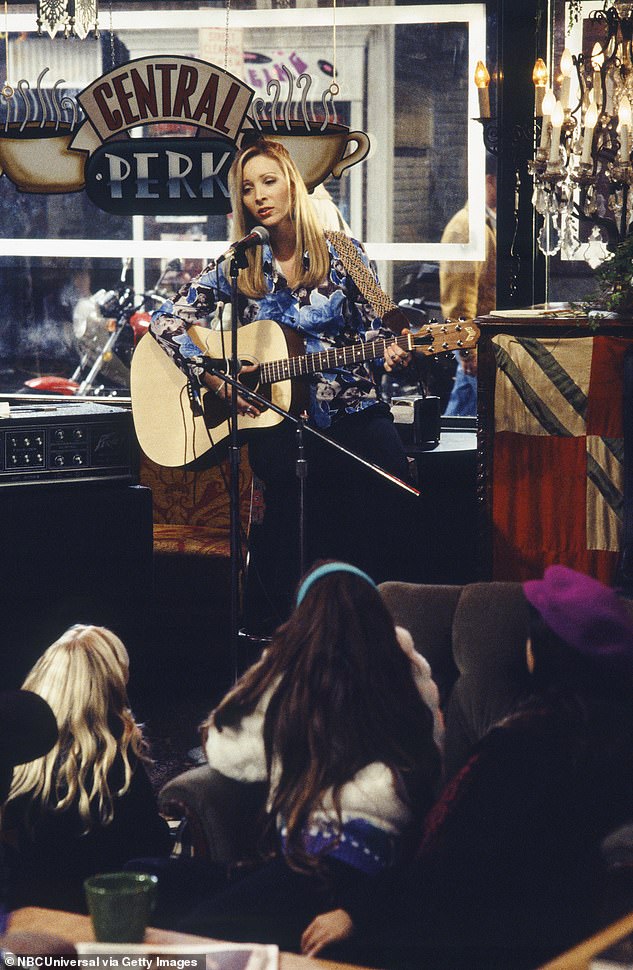 Classic tune: The song is said to have been conceived in 1995 by Betsy Borns, a Friends writer who originally intended for its lyrics to be about a pungent dog entitled “Smelly Dog”