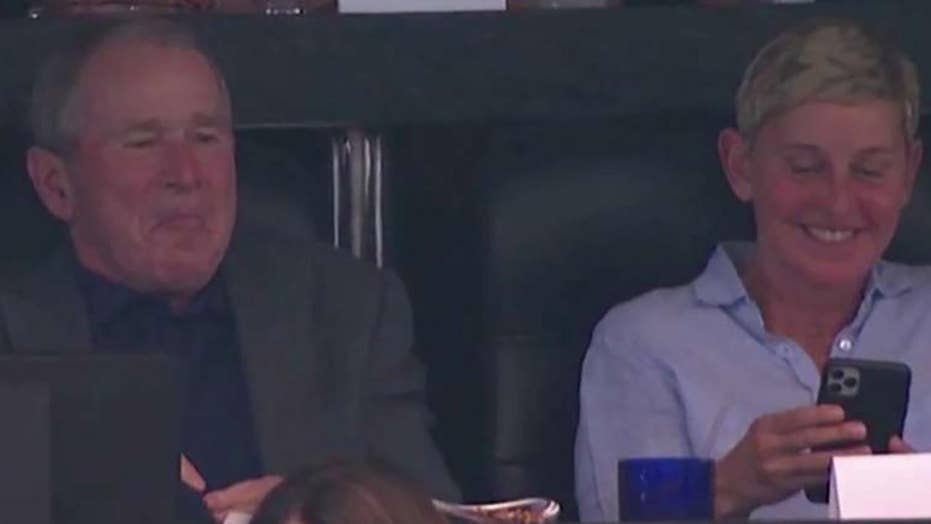 Fox Nation host Lawrence Jones said Tuesday that talk show host and comedian Ellen DeGeneres has shown "selective outrage" regarding whom she chooses to criticize for their political beliefs.

Jones, a Fox News contributor, responded on “Fox & Friends” to the daytime TV star receiving backlash Sunday from the liberal Twitter "mob" after she was shown on television sitting next to former President George W. Bush at the Cowboys-Packers game.

“As I always say with the mob, it’s like a wildfire, if you pour gasoline on it, it’ll eventually get you as well,” Jones said.

“They’re angry with her because once held a position that went after people like this and so now it’s turned on her."

DeGeneres gave a monologue to her audience on Monday, explaining that she and Portia de Rossi were invited to the game by Charlotte Jones, the daughter of Cowboys owner Jerry Jones.

"When we were invited, I was aware that I was going to be surrounded with people from very different views and beliefs. And I'm not talking about politics… I was rooting for the Packers," DeGeneres joked. "So I had to hide my cheese hat in Portia's purse."

He argued that Hart is friends with DeGeneres, unlike pastor Kim Burrell, whose appearance on "Ellen" was nixed in 2017 over comments about gays and lesbians.

“Here’s the problem, she’s attacked people for that position in the past and it seems like when people become her friends, she defends those people," Jones argued.

“When [it is] people that she knows, she comes to their defense, but if it were someone else, she would’ve criticized him and I think that’s something we should shun in America. … I like Ellen, I love that she's big about charities, she gives a lot to the community, I think that's all great. But I think it's important that we have one standard and that is no matter what your position is, you have the freedom in America to have that position."

Fox News’ Joseph A. Wulfsohn contributed to this report.