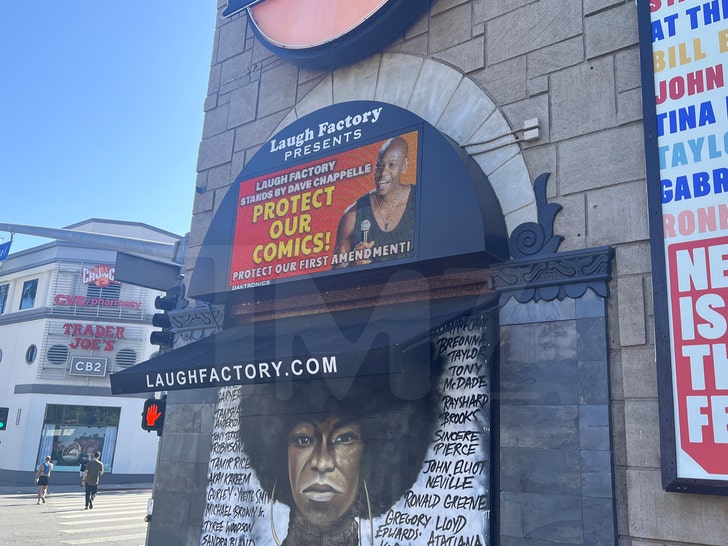 The Laugh Factory, one of the meccas of standup comedy in Los Angeles, is beefing up security … and it’s in response to the attack on Dave Chappelle and the Oscars slap.

Honchos at the famous comedy venue on Sunset Blvd. tell TMZ not only have they put up a sign in support of Dave, but they’re also going to great lengths to protect comics after what happened during Dave’s set Tuesday night at the Hollywood Bowl.

Remember … an attacker jumped on stage and lunged at Dave, slamming him to the ground before running around the stage and eventually catching a beating. The guy had a replica gun with a real knife attachment.

We’re told the new security plan at the Laugh Factory features more security guards both inside and outside the venue, including plainclothes guards in the crowd tasked with preventing anyone from rushing the stage.

Somehow, Dave’s attacker got the gun/knife into the Hollywood Bowl and past metal detectors, and we’re told the Laugh Factory is now using a metal detector at the front door for the first time ever.

The Chappelle attack also prompted a staff meeting at the Laugh Factory … with leadership blaming the incident on the Will Smith slap at the Oscars, seeing it as some sort of copycat effect, combined with a lack of criminal charges for Will.

We’re told the venue was already planning to beef up security due to the Oscars incident, but Tuesday’s attack at the Hollywood Bowl put the plan into action immediately.