Here comes the cavalry in Brooklyn.

The Nets, after years of methodical moves to build out their roster and undo a history of ill-advised trades, made a big splash at the start of N.B.A. free agency on Sunday by agreeing to terms with Kyrie Irving, a six-time All-Star point guard, on a four-year, $142 million contract. Kevin Durant will be coming in tow, on a four-year, $164 million deal, creating what should be one of the best duos in the league once Durant returns from injury.

The Nets, who reached the playoffs last season for the first time since 2015, continued reshaping their roster when DeAndre Jordan, a center known for his rebounding, agreed to a four-year, $40 million contract, his agent told ESPN.

[After much speculation, Kevin Durant agreed to sign with the Nets.]

Durant ruptured his Achilles’ tendon in the N.B.A. finals about three weeks ago and is likely to miss all of the 2019-20 season. But once he returns, the Nets’ roster has the potential to be the finest in franchise history.

In agreeing to sign Irving, 27, who grew up in West Orange, N.J., the Nets are moving on from D’Angelo Russell, the 23-year-old point guard who stepped up to become an All-Star last season. Russell averaged a team-best 21.1 points a game, leading one of the most surprising teams in the Eastern Conference to a sixth seed in the playoffs. Coming off a three-year stretch as one of the worst teams in the N.B.A., the Nets went 42-40 in the regular season before pushing the Philadelphia 76ers in a highly entertaining first-round playoff series.

Under General Manager Sean Marks and Coach Kenny Atkinson, the Nets were able to engineer their stunning turnaround by developing a roster around young players with promise — a necessity after the previous front office, in 2013, sent a host of first-round draft picks to the Boston Celtics in exchange for the aging stars Kevin Garnett and Paul Pierce. The Nets essentially mortgaged a considerable amount of their future for one trip to the conference semifinals, in 2014.

Marks and Atkinson managed to clean up that mess, which was no small feat, and now they are taking a calculated risk by handing the keys of the franchise to one of the league’s more mercurial stars. 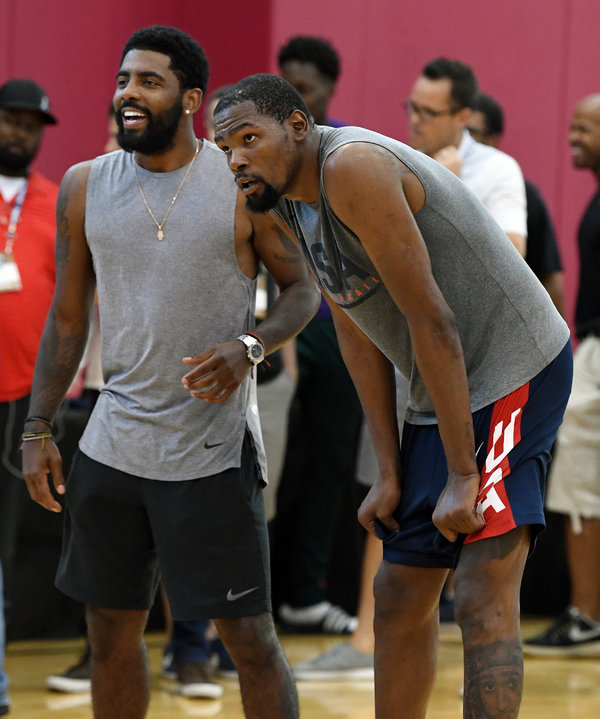 Irving authored one of the most iconic moments in playoff history: a last-minute 3-pointer in Game 7 of the 2016 N.B.A. finals that toppled the Warriors and lifted the Cleveland Cavaliers to their first and only championship. He celebrated that triumph with LeBron James, with whom he had formed one of the league’s most fearsome duos.

But just over a year later, with the goal of getting out of James’s shadow, Irving forced his way out of Cleveland. The Cavaliers acquiesced to his request for a trade and he ended up in Boston, where the Celtics were coming off a trip to the Eastern Conference finals and appeared primed for championship contention with Irving in the fold.

The Celtics advanced to the conference finals in 2018, but they did so without Irving, who missed the playoffs because of an injury. His time in Boston then began to crumble last season as his teammates and coaches bore witness to his many sides: the ups and the moody downs, his on-court wizardry too often offset by an inability (or perhaps an unwillingness) to lead younger teammates.

He put up terrific numbers last season, averaging 23.8 points, 6.9 assists and 5.0 rebounds per game. But the Celtics lacked chemistry, and Irving struggled in nine playoff games, averaging 21.3 points while shooting just 38.5 percent from the field. In the middle of an abysmal series against the Milwaukee Bucks in the Eastern Conference semifinals, Irving looked and sounded as obstinate as ever, freezing out his teammates in blowout losses before professing his greatness in news conferences.

“Who cares?” he said when he was asked about his poor shooting. “I’m a basketball player.”

A few days later, in a 25-point loss to the Bucks that closed out the Celtics’ season, Irving shot just 6 of 21 from the field. Months after pledging his loyalty to the Celtics at a fan event — “If you guys will have me back, I plan on re-signing here next summer,” he said at the time — he was ready to move on, again.

The Nets, of course, are willing to bet on the Kyrie Experience, in large part because of his enormous talent. He is a top-flight player, and for a franchise that has been eager to gain more of a foothold in the New York market since moving to Brooklyn in 2012, the addition of Irving is a huge boost.

It remains to be seen, though, how Irving will mesh with a new team. He is not a simple man — an athlete who has said that he loathes the spotlight, even as he continues to moonlight as an actor in films and as a well-compensated pitchman for sneakers and soft drinks.

Now, he is bound for the Nets and his next role. The show goes on.