Stormi Webster truly is her mom Kylie’s mini-me, as she impersonated the ‘Kylie Swim’ mogul in an adorable new clip.

Kylie Jenner, 24, is set to launch her first Kylie Swim line, and it seems she unintentionally employed her baby girl Stormi Webster, 3, to help with promotion. In a sweet new clip, shared to Kylie’s IG Story on September 16, the toddler impersonated her pregnant mother as she crashed the video. Stormi, whom Kylie shares with rapper Travis Scott, 30, was seen snuggling her mom while on private plane. “Hi, it’s me, Kylie Jenner,” Stormi hilariously said, as she covered her mom’s face with her hand.

The Kylie Cosmetics mogul couldn’t contain her glee as she yelled “what” and cuddled up to her mini-me. Prior to Stormi taking control of the IG story, the reality star was telling her followers that Kylie Swim launches on September 17. “I am so excited, that Kylie Swim is finally launching tomorrow at 3PM,” the cosmetics mogul said.

“Doing swimwear for you guys has always been a dream of mine.” As fans would know, Kylie recently revealed her second pregnancy with a sweet and touching video that featured clips of the moment she found out she was expecting. Once the news broke, Kylie’s sisters Kim Kardashian, Kourtney Kardashian, and Khloe Kardashian all commented on the post with congratulatory messages for the makeup mogul. 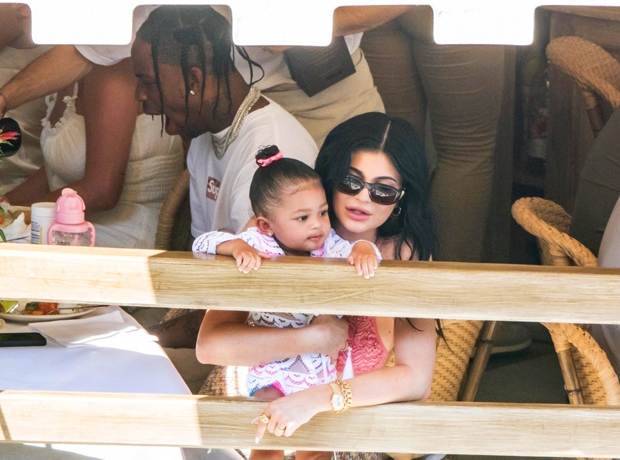 Her supermodel sis Kendall Jenner also recently revealed that little Stormi has a special bond with her NBA star beau, Devin Booker, 24. “Him and Stormi have an amazing relationship,” Kendall told Jimmy Fallon on the September 14 episode of The Tonight Show. “She has the biggest crush on him, and I’m jealous sometimes. I’m like, ‘Stop. Can you guys not?’”

She also told fans how Kylie broke the exciting baby news. “She called me and I answered the phone and she just had a picture of her sonogram. And I was like, ‘Oh my god!’ ” she told the talk show host. However, the 818 Tequila mogul did admit she wasn’t too surprised that Kylie and her on-again, off-again partner Travis were expecting again. “I wasn’t really shocked, because I felt like it could happen some day soon,” Kendall explained. “But I was excited, I was very excited. It’s just a blessing, it’s amazing.”