Game of Thrones sweethearts turned off-screen married couple Kit Harington and Rose Leslie are ready for the world to know they’re parents. The two were photographed out in London on Tuesday with their baby, subtly confirming that Leslie privately gave birth to their first child.

Harington’s rep confirmed news of the birth to E!, revealing the two welcomed a baby boy. Leslie and Harington are “very very happy!” the rep said. At this point, the baby’s name and birthday remain unknown. 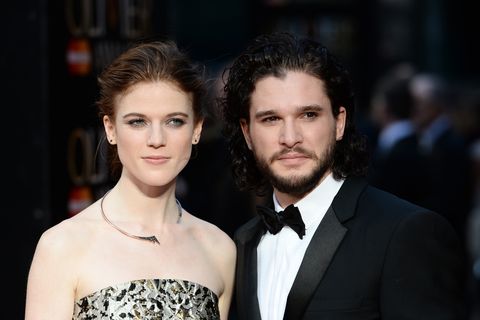 Leslie announced her pregnancy in September during her interview and photoshoot with the UK’s Make magazine. She opted to keep the experience private, however, discussing instead what her life in quarantine with her husband Harington has been like. “I feel really fortunate to be able to say that I am working; given the current situation when so many people in our industry can’t work,” she said. “At the weekends, when we have downtime, I head to [Scotland’s] Loch Lomond and walk around the water. I feel a huge sense of peace when in Scotland. I’ve lived in London for 13 years now and I love it, but I’m more of a country bumpkin than a town mouse.”

She added that the couple purchased a home in East Anglia, England, after living in New York for years. “What a glorious thing to be able to run to the countryside and recoup,” she said. “It’s a great privilege to be surrounded by greenery, birdsong and hedgerows, and our delightful neighbors. It’s so peaceful.”

Harington and Leslie got married in 2018 after falling in love while working on Game of Thrones.