Katya Jones, 32, has opened up on a steamy session that resulted in her having relations with an ex-flame in the middle of the woods. The Strictly Come Dancing professional split from husband Neil Jones in 2019 and has since been using apps to look for love during the coronavirus pandemic

I tried, but we went outside

When asked if she’d had sex outside, Katya said: “I’ve crossed that one out… it was in the woods.

“We were driving and stopped and then… hiding behind the car.

“It’s uncomfortable in the car. I tried, but we went outside.”

Katya refused to name the person involved, but of online apps she said:  “How else would you date someone in a pandemic? But I hated it. 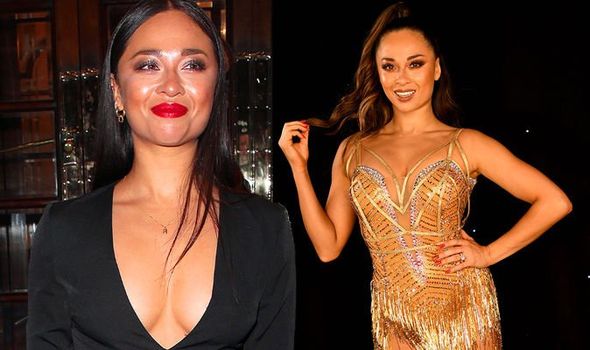 “I’m an old romantic. I want to walk in the park with my dog and cross eyes with somebody, and just feel the little tingles.

“You could be chatting but unless you meet them and feel the energy that’s more important,” she added to The Sun.

The announcement of their split came after she was spotted kissing her Strictly Come Dancing partner Seann Walsh following a rehearsal session together.

She went on: “We have a good relationship. It’s really nice.

“We’ve known each other 13 years so we’ve gone through everything together.”

Neil has previously opened up about the incident with the same publication, saying: “It was a shock. It was a major shock.

“I appreciated it of course that Katya told me, so I found out from Katya before it appeared.

“Straight away for me, I was more worried about Katya because I could see what was going to happen. It was a natural reaction.”

The couple also tried to make their marriage work, but according to Neil they “couldn’t” repair their union.

The 39-year-old also stated that the end of their relationship was “nothing to do” with Seann.

Both Katya and Neil continue to appear in Strictly and still support for each other on social media.

However the former revealed she did feel “a bit jealous” when her ex decided to introduce their beloved dog Crumble to his girlfriend at the time, Luisa Eusse, after their marriage had broken up.

Opening up on how it felt to see Crumble with the new person in Neil’s life, Katya said: “Neil did have a relationship for a while, so we’ve been through that. I was a little bit jealous of another person being with Crumble.

“At the end of the day, she knows who her parents are and I’m pretty sure we will all be absolutely fine.

“We are adults and it’s about Crumble. As long as she is happy and we are making her happy and safe, that’s what’s important,” she added to Waggel magazine.