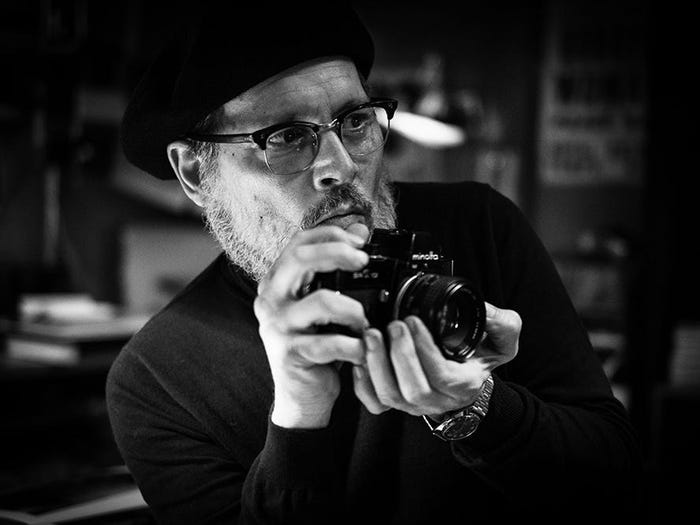 Johnny Depp was photographed accepting an award at the Polish EnergaCamerimage film festival, a festival dedicated to "the art of cinematography." Depp received the Camerimage Award to an Actor with Unique Visual Sensitivity after his movie "Minamata" closed the 28th edition of the festival.

Depp did not collect the award in person due to the COVID-19 pandemic.

The EnergaCamerimage Instagram posted the photo of three-time Oscar nominee Depp on Sunday, writing: "Greetings from @johnnydepp from Bahamas."

In a post announcing the news, EnergaCamerimage wrote that Depp is "one of the most versatile performers of modern cinema."

It wrote: "Johnny Depp earned himself a reputation of a true acting chameleon capable of handling basically everything that the screenwriters, directors, costume designers, make-up artists and others threw at him."

The post lauded Depp for his many "memorable performances that shaped several generations of moviegoers," and stated that "we do regret that we will not be able to stand together with Johnny Depp before our superb audience."

The festival also name-checked several of Depp's movies, including the upcoming third instalment of the "Fantastic Beasts" franchise. However, since that post was written, Depp has been removed from his role in that movie as Gellert Grindelwald, which he played in the second instalment, "The Crimes of Grindelwald."

Depp's resignation came after Judge Andrew Nicol ruled in favor of The Sun newspaper over Depp following the libel trial in which Depp attempted to sue the paper for calling him a "wife beater." The Sun alleged that Depp physically abused his now ex-wife Amber Heard, which Depp denies.

Depp called the ruling "surreal" in a statement posted on Instagram, and wrote that he planned to appeal.

Depp wrote: "My resolve remains strong and I intend to prove that the allegations against me are false. My life and career will not be defined by this moment in time."

Meanwhile, the search for Depp's Grindelwald successor continues, with no actor formally announcd yet. However, "Casino Royale" and "Doctor Strange" actor Mads Mikkelsen is the favorite for the role. Mikkelsen told IGN that it was just a "rumor" at this stage, but that he is "waiting for that phone call."