Jennifer Lopez has reached the level of girlfriend status that most people eventually hit while dating their significant other. No, we’re not talking about making the ‘ship Instagram official. This has nothing to do with meeting the parents. And it’s got absolutely nothing to do with the m-word (cough, marriage). We’re talking about taking your SO’s clothes and wearing them as your own.

Yuuuup. You know the move. Maybe you wake up and throw on your boyfriend’s hoodie and just… never give it back. Maybe you’ve been eyeing your girlfriend’s jeans and decide to try them on… forever. Whatever it is, it’s a crucial step for any couple to take and our J.Lo seems to have taken it with fiancé turned ex turned boyfriend Ben Affleck. 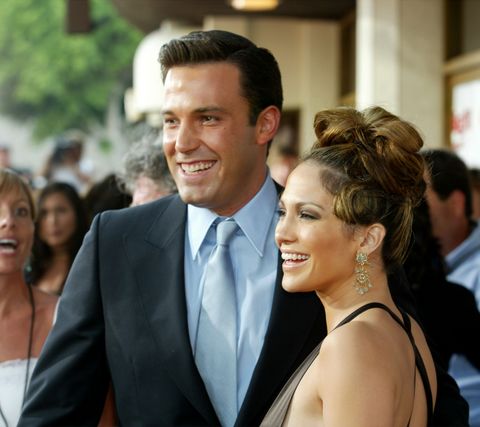 Jennifer was spotted arriving in Los Angeles on Thursday, June 10, wearing a flannel shirt that looks awfully similar to one of Ben’s flannel shirts, per Us Weekly (click here to see for yourself!). She was photographed wearing a red and blue oversized shirt with a white crop top underneath Ben has been spotted numerous times wearing what looks like the exact same shirt over the last few years. Clearly, their relationship is still going strong.

An insider says that Bennifer is “discussing summer plans,” People reports. Their source adds that they “want to spend as much time together as possible,” despite living on opposite sides of the country. The insider explains that “they also want to take a trip,” and that Jennifer “is incredibly happy” with Ben. “They are both acting very comfortable in their relationship,” the source says.

An E! News insider reveals that J.Lo is planning on moving back to Los Angeles. “She will be between L.A. and the Hamptons this summer, but L.A. will be her base,” the source says. “She is looking at schools for her kids in the fall. She is excited about a fresh start and pursuing things with Ben. They will be at their L.A. home soon.”

You love all the deets on J.Lo and Ben. So do we! Let’s overanalyze them together.