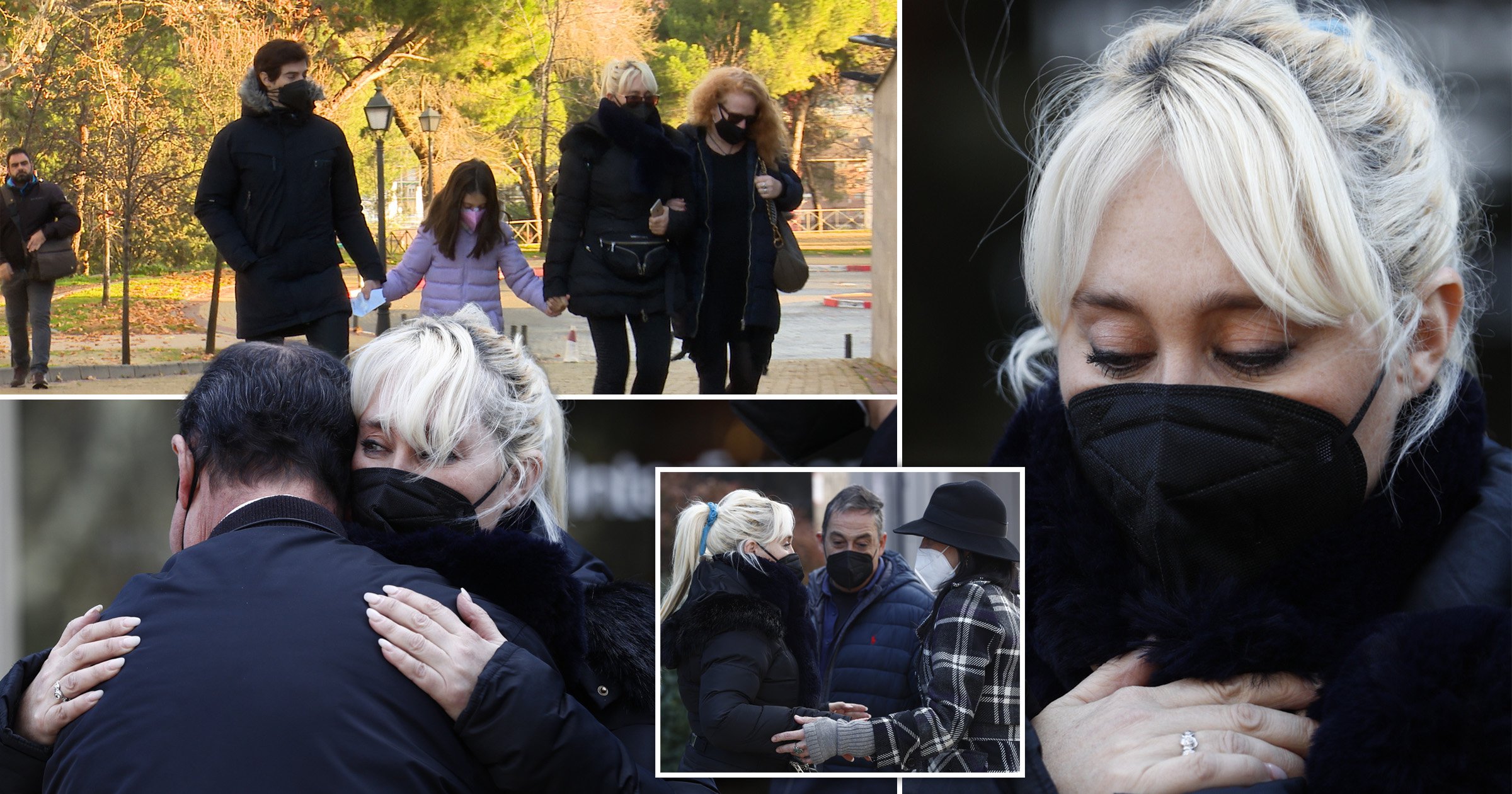 The singer’s ex-wife Geraldine Larrosa and her family were among those in attendance and were pictured hugging loved ones outside the private memorial before it was opened up for fans.

Geraldine, who appeared to be teary-eyed, was accompanied by her daughter Scarlett, nine, who was Carlos’ goddaughter, and her new partner.

They were seen wearing protective face masks and walking hand in hand to the service.

The public wake, organised by Marin’s family so as many fans as possible could bid farewell to him, will finish at 8pm local time.

Marin is due to be cremated after a mass on Tuesday and his ashes will be deposited at Our Lady of Almudena Cemetery, the largest in Madrid and one of the largest in western Europe, alongside those of his father in a family niche in accordance with his last wishes.

Geraldine recently shared the heartwrenching details of her final FaceTime call with Marin before his death.

‘Before being intubated he said goodbye to me because he knew he wasn’t going to pull through and it was the saddest image in my life,’ she recalled.

‘He called me and told me he loved me like mad and that I was the woman of his life and asked me to take care of his family.’

News of Marin’s death was confirmed by his bandmates who wrote on the official Instagram account: ‘It is with heavy hearts that we are letting you know that our friend and partner, Carlos Marin, has passed away.

‘He will be missed by his friends, family and fans. There wiIl never be another voice or spirit like Carlos.

‘For 17 years the four of us have been on this incredible journey of Il Divo together, and we will miss our dear friend.

‘We hope and pray that his beautiful soul will rest in peace. With Love — David [Miller], Sebastien [Izambard] and Urs [Bühler].’

They added: ‘At this time, we would like to invite all of our fans to join us in celebrating the life of our dear friend and partner Carlos Marin.

Details of his funeral at the Saint Isidore Funeral Home (Tanatorio de San Isidro) were shared by Marin’s own Instagram account, with the flyer reading: ‘We invite you to say goodbye to him on his last trip lying in repose.’

The caption added: ‘Never stop shining, friend. You are an example of a successful person. You have done, and will continue to make countless families happy with your music and charisma. I pray for the eternal rest of your Soul. Hug the sky.’

The German-born Spanish baritone singer died after he was rushed to hospital in mid-December and placed in the intensive care unit at Manchester Royal Hospital.

Il Divo was first formed in 2003 by Simon Cowell under his SyCo record label, though they later parted ways with the music mogul, going on to be a worldwide success.

Cowell paid tribute to Marin following his death, taking to Twitter to say: ‘I am finding this so difficult to put into words how I feel right now. I am devastated Carlos Marin has passed away.

‘He loved life. He loved performing and always had so much appreciation towards the fans who supported the group from day 1. Rest in peace Carlos. I will miss you.’