Germany advanced to the Women’s World Cup quarterfinals for the eighth straight time, beating the African champion, Nigeria, 3-0, on Saturday in Grenoble, France.

Germany’s captain, Alexandra Popp, playing in her 100th international match, scored in the 20th minute. Sara Däbritz made it 2-0 in the 27th minute with a penalty kick, and Lea Schüller got the final goal in the 82nd.

Second-ranked Germany, which has outscored opponents, 9-0, will play the winner of Monday’s match between Sweden and Canada next Saturday in Rennes, a weeklong layoff that allows time for midfielder Dzsenifer Marozsan’s broken toe to heal. The Germans, who won the tournament in 2003 and 2007, have never failed to reach the quarterfinals. 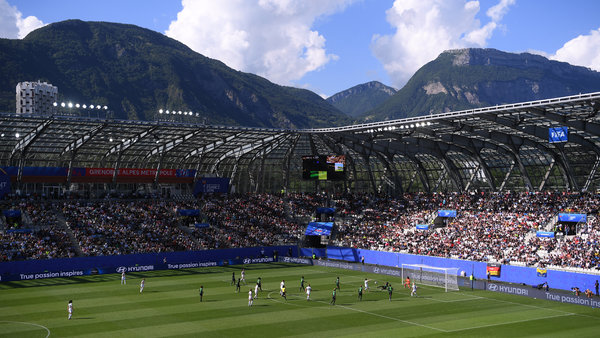 No. 38 Nigeria was in the knockout phase for the second time, the first since it lost in the quarterfinals to Brazil in 1999, and it joined Cameroon to become the first pair of African teams to reach the knockout stage in the same Women’s World Cup. The Indomitable Lionesses play England on Sunday.

Popp scored on a 4-yard header off Lina Magull’s corner kick, her 48th international goal. A video review upheld the goal after determining Svenja Huth, who was in an offside position, did not obstruct the view of goalkeeper Chiamaka Nnadozie.

Däbritz scored on a low penalty kick beyond the outstretched left hand of Nnadozie, her third goal of the tournament and 13th of her international career. Evelyn Nwabuoku had tried to clear a ball but made a cleats-up follow-through into Magull, causing the penalty.

Nigeria had an excellent chance to cut its deficit in the 50th minute when a second-half substitute, Rasheedat Ajibade, streaked up a flank and passed to an open Desire Oparanozie, but the ball was just ahead of the forward and rolled by.

Schüller got her ninth international goal after a giveaway by Halimatu Ayinde.

The Super Falcons were missing defender Ngozi Ebere and midfielder Rita Chikwelu, who served suspensions for yellow-card accumulation, and forward Asisat Oshoala, who was injured.