During the show, the actress discussed her traumatic birth of the couple’s daughter Mia, who was born in July.

Reflecting on her experience in hospital, the radio host told panelists she had to undergo an emergency C-section, also known as a Caesarean, after their little one’s heart rate dropped during contractions.

Gemma later suffered a haemorrhage, but was unaware of the blood at first due to being numb from her epidural.

Had you seen the program yesterday you’ll have seen me say it absolutely IS NOT the easy option!

Within the chat, Gemma also addressed negative comments she had received about the process, revealing one social media insisted having a C-section was an “easy option”, to which she disagreed.

She said: “Somebody said I had taken the easy option by having a C-section and I was a bit like,” she added while giving an unimpressed look.

Christine Lampard added: “An emergency C-section is hardly taking an easy option,” to which Gemma agreed

After the duo’s appearance on the show, Gemma thanked the panelists for having her as a guest.

She wrote: “Big thank you to @loosewomen for having us today.

“Lovely to sit and natter with the ladies. To those asking my dress is from dancing_leopard and my shoes are Vans styled by the lovely sulkydollstyling.”

One ITV viewer responded to Gemma’s tweet, insisting Gemma had agreed that a C-section was an easy option.

They wrote: “I missed this yesterday but I don’t however agree that a C-section is the easy option. 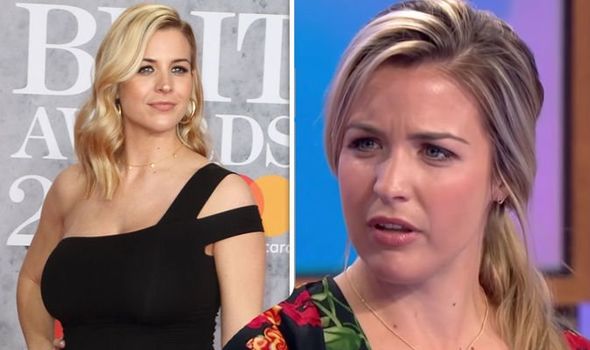 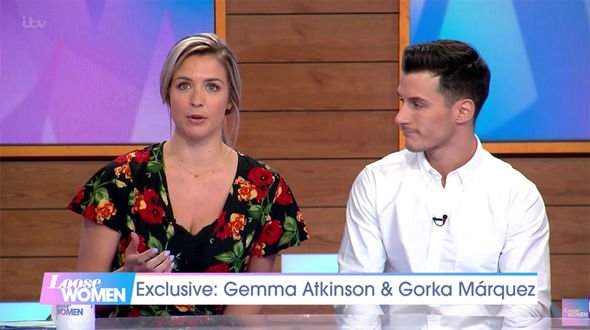 “(Was mentioned on today’s #LooseWomen they should be discussing that not allow it).

“If you asked your viewers I bet the majority would agree it is NOT an easy option.”

Hitting back at the ITV viewer, Gemma clarified she said a C-section was not easy.

She replied: “Well had you seen the program yesterday you’ll have seen me say it absolutely IS NOT the easy option!

“It’s what was said to me after my emergency C section. There is no easy option when it comes to child birth in my opinion.”(sic)

Responding to Gemma, the Twitter user apologised for her misinterpretation.

She replied: “Thats what they made out you said on today’s show sorry. I am sorry, that’s just the way it came across today on the show.”

Elsewhere during their television appearance, Gemma Atkinson’s beau Gorka recalled his reaction to the birth and the affect it had on Gemma. 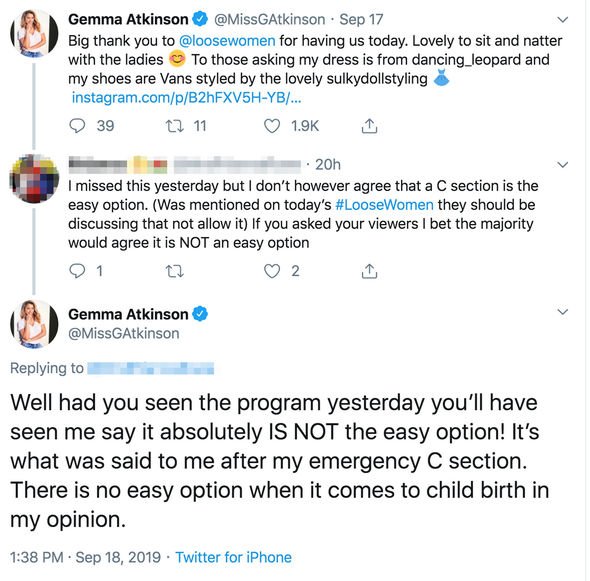 Gorka admitted the process was “frustrating” as he didn’t fully understand what was happening.

He said: “It’s the most frustrating situation.

“I didn’t know what was happening, doctors rushing in, no one tells me anything until the end.

“But she did so well I was so proud of her,” the professional dancer remarked as he looked at his partner with admiration.”

Gemma and Gorka got together after competing on Strictly Come Dancing in 2017.

They told panelists they grew close during the nationwide tour which began the following year in January.

Back in February this year, Gemma and Gorka announced they are expecting their first child together.