Darius McCrary shut down Sidney Starr dating rumors, revealing he was engaged and stating that his fiancé probably wouldn’t be pleased with said rumors.

Darius McCrary addressed rumors that he’s dating Love & Hip Hop star Sidney Starr. The former Family Matters actor, 45, shared a video on Instagram on October 18 with his TV mom Jo Marie Payton to shut down the rumors. While he didn’t name Sidney, 32, by name, he said that the rumors “aren’t true” and revealed that he was engaged, adding that his fiancé “would really have something different to say” about the rumors.

Darius also seemingly alluded to the transgender model and actress in his caption, using the Pride #loveislove hashtag. “While y’all are discussing these rumors that aren’t true, we eating,” he said in the clip, which featured him and his former Family Matters mom enjoying some oxtails. “And they aren’t true, OK?” Jo Marie added, before Darius asked, “What are we, in high school? You’re going to tell me who I can’t be friends with, who I can’t hang out with?”

The actor added, “I think my fiancé would really have something different to say. That’s what y’all should be focusing on — where that ring is.” Darius didn’t confirm who he was engaged to, but the impending nuptials will mark his fourth marriage. He was previously married to Juliette Vann, Karrine Steffans, and Tammy Brawner. He shares daughter Zoey, 5, with Tammy.

Darius and Sidney sparked dating rumors after the model shared a video of the two during a photoshoot on Instagram on October 17. “We both are just built special!!!!!” Sidney captioned the video. “2 hard working celebrities in the industry!!!!!!! Eddie Winslow we love you!!!!” Sidney shared a photo from the photoshoot prior to the video, too, calling Darius a “great” friend. 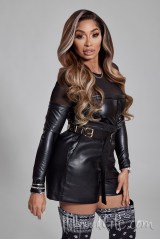 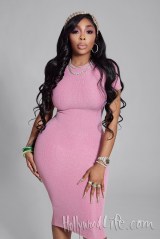 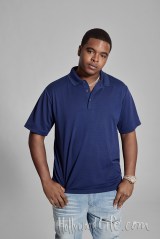 “Here standing next to me is a seasoned legend Actor in this entertainment industry. @dariusmccrary,” Sidney captioned the post. “A black heterosexual male actor who’s standing aside a controversial transgender woman like myself.. We are great friends … and this is a powerful movement we have made to let this be a lesson to the WORLD that we are all human ! No matter what !!!!”

The posts came after Darius had shared a now-deleted clip of Sidney dancing on Instagram and captioned the post, “The #[email protected] what’s understood don’t need to be explained xoxoxo …” Sidney responded, “Thanks baby baby,” leading fans to interpret the supportive niceties as flirting.