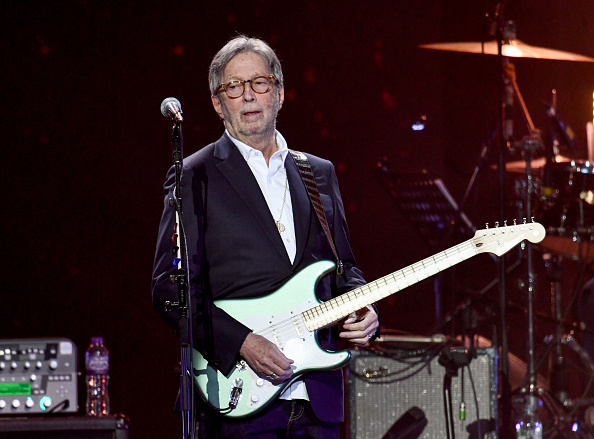 Eric Clapton has said he had a ‘disastrous’ reaction to the Covid-19 vaccine, slamming what he branded ‘propaganda’ that ‘overstated’ the safety of the vaccine.

The Medical Healthcare Products and Regulatory Agency has previously reiterated that the benefits of the Oxford-AstraZeneca jab outweigh the risks for most people, while Prime Minister Boris Johnson and medical director of primary care at NHS England Dr Nikita Kanani also previously assured people the Oxford vaccine is safe.

However, sharing he feared he may never play again, Clapton. 76, recently wrote in a letter to Italian architect, music mogul and anti-lockdown activist Robin Monotti Graziadei of the ‘severe reactions’ he had for 10 days following his first dose of AstraZeneca in February – noting he eventually recovered.

Then, according to the singer, he had his second dose ‘six weeks’ later, but found his ‘hands and feet were either frozen, numb or burning, and pretty much useless for two weeks’ afterwards.

The letter was shared, reportedly with Clapton’s permission, on Graziadei’s Telegram account, which Rolling Stone confirmed the authenticity of.

He reportedly wrote: ‘I took the first jab of AZ and straight away had severe reactions which lasted ten days. I recovered eventually and was told it would be twelve weeks before the second one…

‘About six weeks later I was offered and took the second AZ shot, but with a little more knowledge of the dangers. Needless to say the reactions were disastrous, my hands and feet were either frozen, numb or burning, and pretty much useless for two weeks, I feared I would never play again, (I suffer with peripheral neuropathy and should never have gone near the needle.) But the propaganda said the vaccine was safe for everyone… [sic]’

As with all vaccination programmes, a small number of people may have an adverse reaction – although rarely anything worse than a mild case of the virus itself, and it has been long documented that possible side-effects from taking the AstraZeneca vaccine can include fatigue, chills, fever, nausea and headaches.

In his letter, Clapton – who suffers from peripheral neuropathy, a disease affecting the nerves beyond the brain and spinal cord – also branded anti-lockdown politician Desmond Swayne his ‘hero’ while singing the praises of particular YouTube channels during the health crisis.

He wrote: ‘I continue to tread the path of passive rebellion and try to tow the line in order to be able to actively love my family, but it’s hard to bite my tongue with what I now know. [sic]’

It’s not the first time Clapton has made his thoughts on the pandemic known, after he appeared on Van Morrison’s anti-lockdown song Stand and Deliver in December last year.

The song hit out at the Government over the reaction to the coronavirus pandemic and included the lyrics ‘Do you wanna be a free man/ Or do you wanna be a slave?/ Do you wanna wear these chains/ Until you’re lying in the grave?’