EDEN CONFIDENTIAL: A headstone at last for Princess Diana’s stepmother

As princes Harry and William prepare to unveil the statue of their mother at Kensington Palace, I can disclose that a headstone has finally been installed to mark the spot where Princess Diana’s larger-than-life stepmother, Raine Spencer, is buried seven miles away.

The simple headstone, engraved with a gold coronet and the inscription ‘Countess Raine Spencer 1929-2016’, has just been placed in North Sheen Cemetery, South-West London, five years after her death.

‘She was elegant and unforgettable, but also very much a person who loved family,’ her daughter, Charlotte di Carcaci, tells me.

‘We are so pleased to have her gravestone in place: simple, elegant and a memorial to the love and affection in which she was so widely held.’ 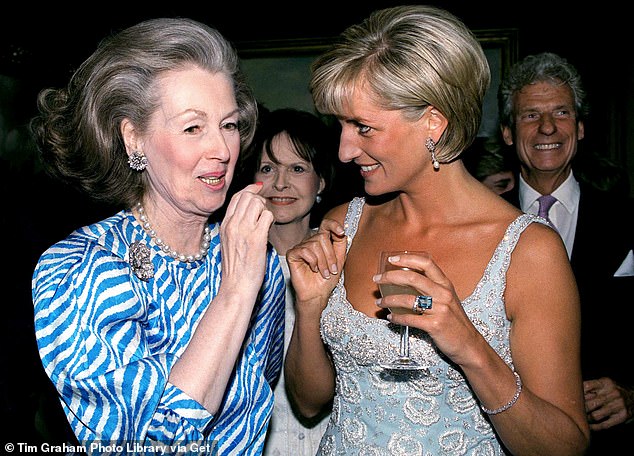 The daughter of romance novelist Dame Barbara Cartland, Raine was a vivacious figure who, after becoming a director at Harrods, happily worked behind the till at the perfume counter.

She married Diana’s father, the 8th Earl Spencer, in 1976, but left the family’s ancestral home Althorp, after his death in 1992.

On the headstone there is no mention of her beloved four children or eight grandchildren.

Henry Legge, QC, explains: ‘This was not the place to try and summarise my mother’s life.

‘The design is intentionally simple and is similar to the stone which we arranged for my father’s grave. We also thought it was more elegant to keep the content of the stone simple.’

Raine’s eldest son from her first marriage to Gerald Legge, the Earl of Dartmouth, has yet to visit the headstone despite the relaxation in Covid restrictions. 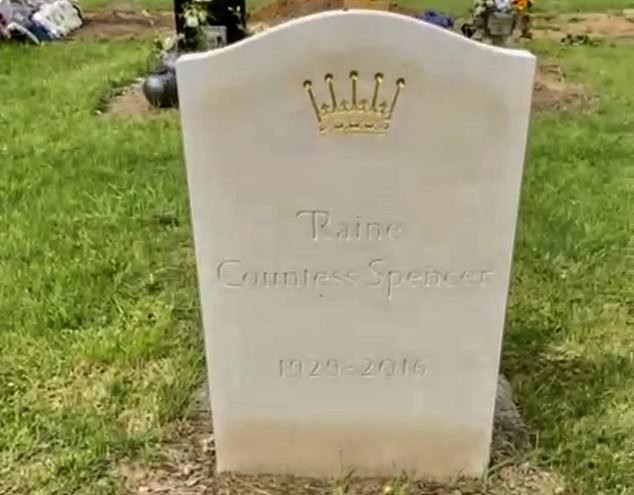 Countess Spencer’s headstone (pictured) is deliberately simple, according to her family

‘It was my mother’s wish to have something very simple,’ he tells me.

After Earl Spencer’s death, she married French Count Jean-Francois de Chambrun, but reverted to Countess Spencer after their divorce.

After a bumpy start to their relationship, Diana became close to her stepmother (pictured together) in the years before her death, sharing lunches at Claridge’s and teas at Kensington Palace.

‘Diana never called her stepmother “Acid Raine”,’ insists the Countess’s friend Michael Cole, who gave the eulogy at her Mayfair memorial service in 2016.

‘The children used to say, “Raine, Raine, go away, come again another day”, which was because they missed their real mother.’

Top model Lady Clara Paget couldn’t wait for her wedding to slip into a bridal gown.

The 8th Marquess of Anglesey’s daughter hired a vintage white dress, as well as a tiara and veil, to celebrate her hen night at Mayfair’s Isabel restaurant.

‘Round one,’ she jokes to friends, with a glass of tequila in her hand.

Her pals include Georgia May Jagger, Suki Waterhouse and Cara Delevingne. Lady Clara, 32, who has appeared in films including St Trinian’s 2 and Fast & Furious 6, is due to exchange vows soon with concert promoter Oscar Tuttiett.

For his stag do, the former Burberry model and chums dressed up in monk-style black robes. Let’s hope he hasn’t picked up any bad habits.

Professor Chris Whitty’s intimidation by a group of thugs in a London park must have brought back intensely painful memories for the Chief Medical Officer.

His father, Ken Whitty, was shot dead in 1984 when he was deputy director of the British Council in Athens.

Palestinian terrorist Abu Nidal had objected to the council ‘exporting British imperialist culture’ when it took a production of The School For Scandal on tour. 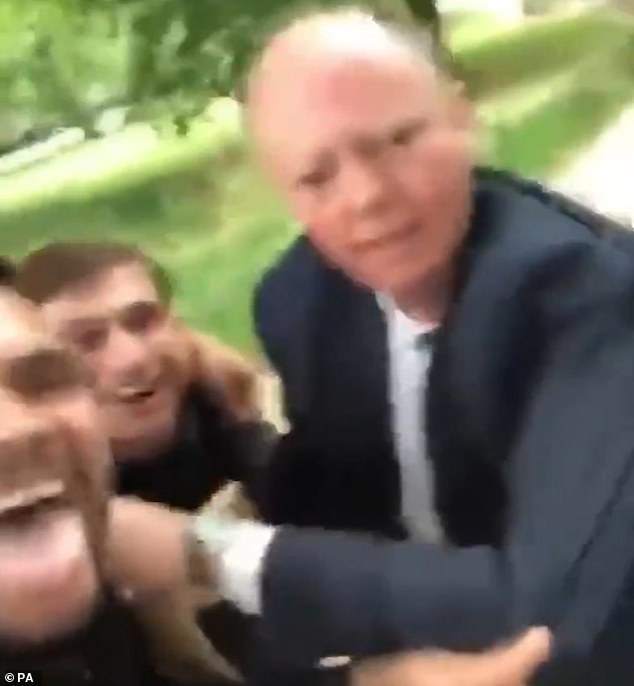 Professor Chris Whitty, England’s chief medical officer, was harassed by two men in St James’ Park on Sunday who tried to grab him and filmed the encounter while he tried to get away

One of the cast, Marc Sinden, tells me: ‘As an example of what was going to happen to us on the tour, Nidal’s group murdered Ken Whitty.

‘We were asked if we wanted to continue as all the main cast were named targets. We said yes and so had armed guards with us in Athens and Istanbul.’

Sinden adds: ‘That’s why these ignorant bastards in London deserve to be punished. Prof Whitty must have been terrified and my heart goes out to him.’

The secret of the monarch’s immaculately coiffed hair can be revealed.

‘I met somebody who was the Queen’s hairdresser, who said that what she likes and insists upon is that her hair is entirely symmetrical,’ reveals broadcaster Dame Esther Rantzen.

‘Her hair has to look the same from one profile and then to the other, so that whatever side people are watching her from, her hair always looks exactly the same.’ 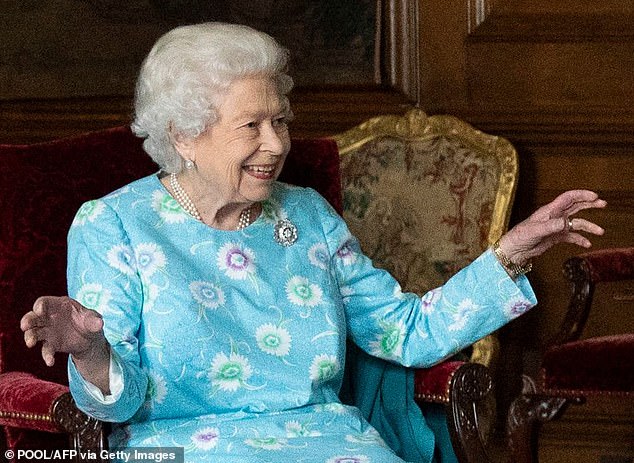 Dinner parties at the elegant Georgian home of Michelin star-winning Angela Hartnett and her husband, The French House head chef Neil Borthwick, can be fraught affairs.

‘I love him to death, but he’s just carnage,’ Hartnett wails. ‘Neil doesn’t wear an apron — I say: “You’ve got that stain on your shirt,” it drives me insane — and he doesn’t clean as he goes.

‘So he will use every pan, and it’s just every surface. And when he does clean it’s water everywhere.’

Princess Eugenie introduced her four-month-old son to a herd of elephants — and she didn’t have to leave the country.

She took August to see the ‘herd’ of wooden animals in Green Park as part of the charity drive for the Elephant Family, founded by the Duchess of Cornwall’s late brother, Mark Shand.

Some news to cheer up Guy Ritchie, whose Lore Of The Land pub in Mayfair was gutted by a fire last week.

I hear the Sherlock Holmes director made a £12.75 million profit at his Toff Guy Films business. 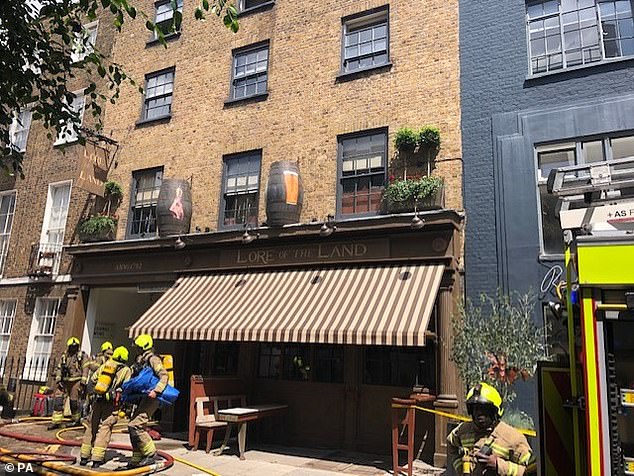 Its earnings in the year to June 2020 take its net worth to a cool £14 million. The bumper year for Ritchie, who set his business up in 2004, follows on from his remake of Aladdin, starring Will Smith, and gangster film The Gentlemen.

Puttin’ on the Brits

MPs were at the front of the queue to enjoy the easing of lockdown, with eight snapping up tickets to the Brit Awards.

I hear six Conservative and two Labour MPs enjoyed freebies worth more than £7,000 for the extravaganza featuring live performances from Sir Elton John and Dua Lipa.