Eamonn Holmes, 60, discussed a childhood memory he had about Coronation Street actor Graham Haberfield during the soap segment on the show with his wife and co-star Ruth Langsford and soap reporter Sharon Marshall. As the latter teased fans about an incident actress Abi Franklin (played by Sally Calman) will face in Weatherfield’s garage in upcoming scenes, the presenter took the opportunity to recall his own memory from the soap.

He told This Morning viewers: “I remember as a child there was a guy called Len Fairclough in Coronation Street, he had a sidekick called Jerry Booth and Jerry was killed under a car in the garage when the jack collapsed, so those garages on the street have form.

Following this, a Twitter user alerted Eamonn about his mix-up of characters.

The Coronation Street fan clarified that the presenter was describing the wrong character and was talking about Harry Hewitt (Ivan Beavis), who died on the cobbles under those circumstances, not Jerry Booth. 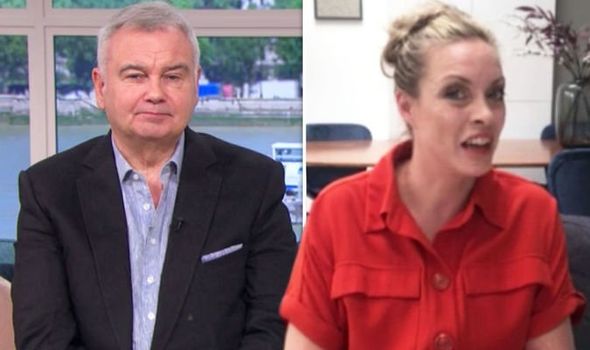 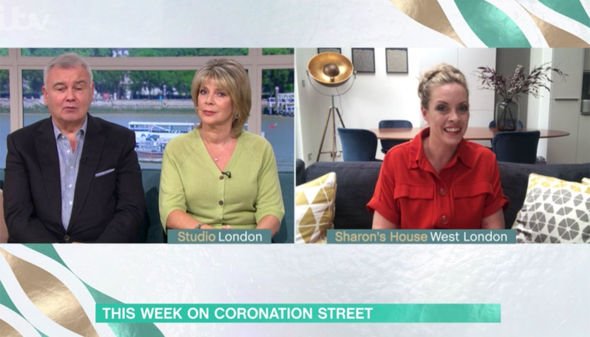 Jerry actor Graham Haberfield died in real life after suffering a heart attack aged 34, but his scenes were kept in the soap as a tribute.

His tweet consisted of the correct information regarding the scene Eamonn was referring to.

Eamonn responded: “Ha ha… Half right then Brian. Thanks for giving me expert guidance my friend. Appreciate it.” 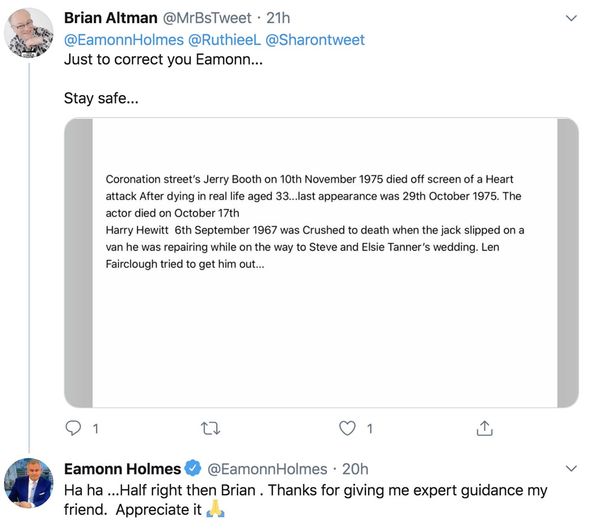 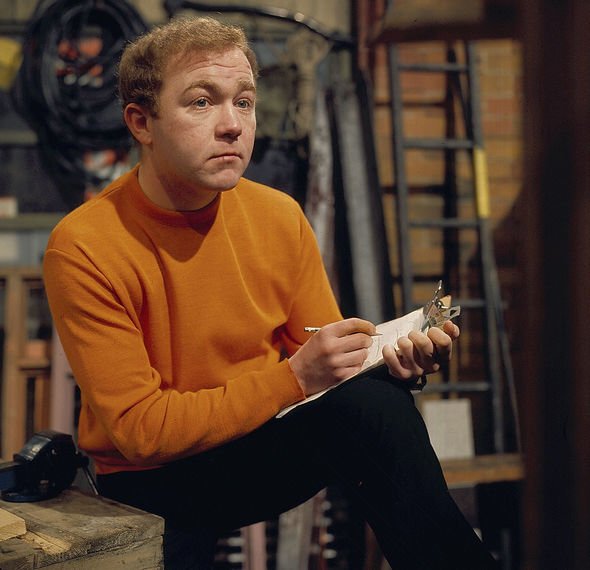 The Coronation Street fan replied: “No problem Eamonn, Glad to help…. any one who watches Corrie has got GREAT TASTE…. See you both at 10am Tomozzo.”(sic)

Eamonn and Ruth have been fronting the ITV morning show from Monday to Thursday in recent weeks, in Holly Willoughby and Phillip Schofield’s absence.

During their stint, the broadcaster has been interacting with fans on Twitter, where he has one million followers.

Ahead of the show today, Eamonn wrote: “All of a sudden it seems both The Mornings and Nights are getting Darker…. think Summer is coming to a close.”]

A fan commented: “I totally agree, up now and thought oh my it’s just like winter; a few weeks ago at this time it would have been light.

“I think as British people we need to be careful what we wish for in our weather! Now don’t you wake Ruth up yet! X.”

Earlier this month, Ruth hit back at a This Morning viewer after they criticised her outfit.

Presenters have been getting themselves ready on the show as the make-up and hair team remain away from the studio, due to the coronavirus pandemic.

Ruth took to Instagram to tell fans she will be returning to QVC and urged fans to look out for a new item in her collection.

While many fans asked the presenter for size and style tips in the comments section, one took the opportunity to criticise Ruth’s choice of clothing on This Morning.

The person wrote: “Shame they put you in frumpy old women’s clothes on This Morning!!!!”

Hitting back, Ruth said her outfit worn on This Morning was her choice.

She replied: “I chose the outfit myself and was very happy with it…. can’t please all of the people all of the time.

This Morning airs weekdays from 10am on ITV.