Editors note: Deadline’s Read the Screenplay series debuts and celebrates the scripts of films that will be factors in this year’s movie awards race.

Most Hollywood disaster movies are about humanity’s heroic efforts to avert a crisis. From The Towering Inferno to Independence Day, Armageddon and Deep Impact, movies usually show humanity triumph and persevere. Don’t Look Up is not that kind of movie.

In Adam McKay’s Don’t Look Up, scientists Dr. Randall Mindy (Leonardo DiCaprio) and Kate Dibiasky (Jennifer Lawrence) discover a comet headed towards Earth. When they alert President Orlean (Meryl Streep), they are frustrated to find she and her staff dismiss their warnings. Mindy and Dibiasky find the media even less receptive to the impending crisis.

McKay and David Sirota’s story and McKay’s script satirizes the forces that fail to respond to a preventable crisis. Politics, media, science deniers and corporate interests thwart Mindy and Dibiasky’s attempts to save the world from this cataclysmic comet.

Don’t Look Up is a satire of real-life environmental concerns such as climate change. In the script, McKay exaggerates the extent to which institutions refuse to address science. In real-life politics, it may be a matter of voting down environmental bills. In Don’t Look Up, Orlean’s staff blatantly changes her position on the comet to serve her re-election.

DiCaprio has used his platform to promote environmental initiatives in real life. The actor said he had been looking for a film with an environmental theme and considered Don’t Look Up “a once in a lifetime opportunity.”

McKay said his first few drafts of the script were dramatic. He was inspired by the 2019 book The Uninhabited Earth, David Wallace-Wells’ analysis of the climate crisis. McKay collaborated with journalist Sirota, who had the idea that a comet could be the metaphor.

The Covid-19 pandemic began before McKay filmed Don’t Look Up. He said the public and political reaction to the pandemic was wilder than his initial drafts. So, he was inspired to make the film “15 percent crazier.”

Don’t Look Up played theaters beginning December 10 and premiered on Netflix on December 24, where it has already broken Netflix records with over 152 million hours streamed. It has won the AFI Award for one of its Movies of the Year and is on the National Board of Review’s Top Films of the Year. It has six Critics Choice nominations and four Golden Globe nominations. 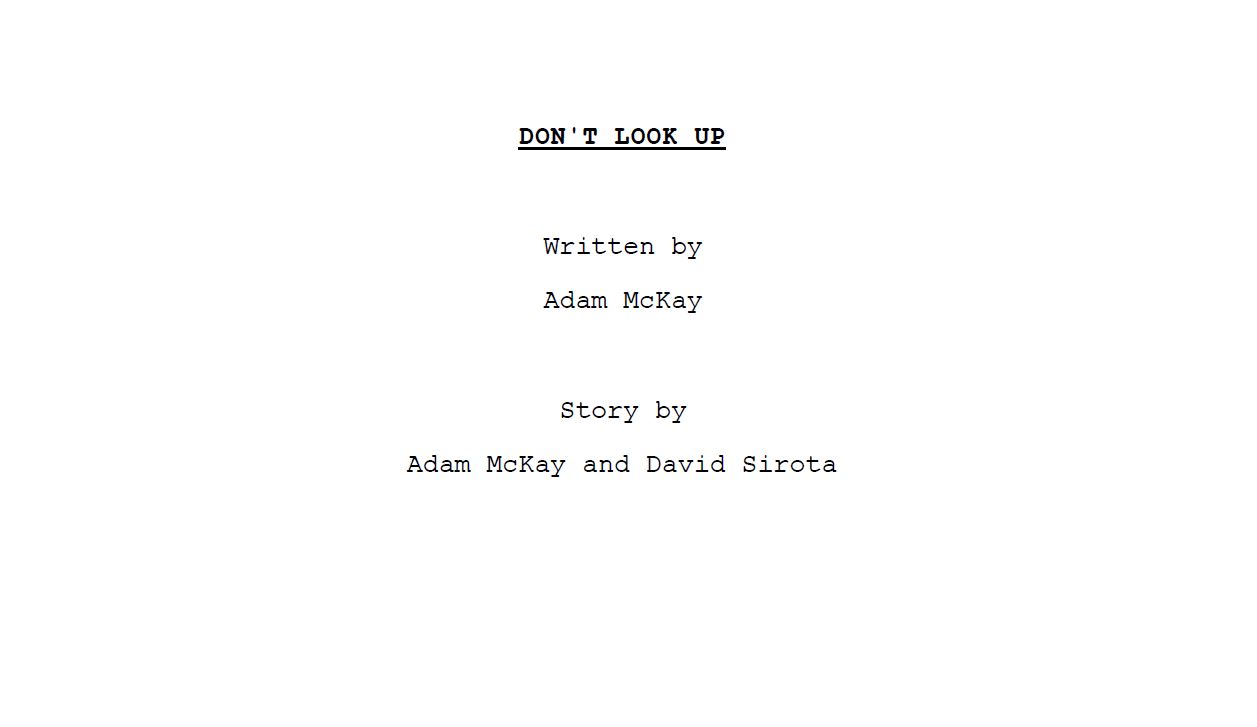 The Film That Lit My Fuse: Joe Wright On Martin Scorsese’s ‘Taxi Driver’

‘Mass’: Read The Screenplay For Fran Kranz’s Stripped-Bare Story About Forgiveness And Healing

‘Red Rocket’: Read The Screenplay For Sean Baker’s Portrait Of A “Suitcase Pimp”