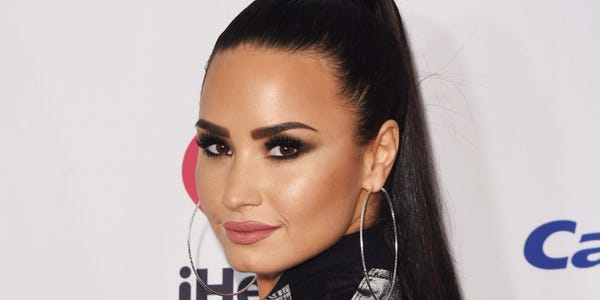 Demi Lovato opened up in a recent Instagram post about how eating what she wanted and not limiting herself to certain foods led to positive changes in relation to body image.

On Friday, the "I Love Me" singer posted selfies on Instagram wearing a low-cut beige tank top.

Fun fact: I never had boobs until I started eating what I wanted. My whole life I hated my small tittaayyys and then when I finally let go of my eating issues, I GOT THE BOOBS I WANTED!!! 😂😂 this is no push-up bra or boob-job y’all!!! IT’S ALL ME!! And you know what, they’re gonna change too!!! AND I’LL BE OKAY WITH THAT AS WELL!! But let this be a lesson y’all.. our bodies will do what they are SUPPOSED to when we let go of trying to control what it does for us. Oh the irony…. 💞 Did you have a similar experience when making peace with your eating issues?? I’d love to hear!!!

"Fun fact: I never had boobs until I started eating what I wanted. My whole life I hated my small tittaayyys and then when I finally let go of my eating issues, I got the boobs I wanted!!!" she wrote in the caption.

"But let this be a lesson y'all.. our bodies will do what they are supposed to when we let go of trying to control what it does for us," she added.

One user wrote in response to Lovato's post that they are a dancer, and being told they needed to be thinner gave them eating issues, which ultimately led to a negative body image.

"It wasn't me, it wasn't the body that I wanted and I wasn't eating what I wanted as well. Now I am in peace with myself, I accepted my normal weight and now I eat tf that I want to when I want to," the user wrote.

Lovato has been public about her struggle with eating disorders and body image issues.

In a 2016 interview with American Way magazine, Lovato said that she first began binge-eating and purging at age nine. She said the issues began in childhood, and that her mother and grandmother had eating disorders.

In 2017, she shared side-by-side photos on Instagram to show how her recovery.

She posted the photos on her Instagram story and captioned them: "recovery is possible."

Lovato also opened up about how elements of her professional life led to issues with body image. For example, in an interview with Bustle in July, Lovato said that her former management team used to monitor her eating before photoshoots.

"I used to have people watching me the night before a photo shoot to make sure that I didn't binge or eat and be swollen the next day," she told Bustle.

In 2019, Lovato showed her cellulite in an unedited photo on Instagram.

"This is my biggest fear," she said of sharing the unedited photo. "And guess what, it's CELLULIT!!!!"

Representatives for Demi Lovato did not immediately respond to Insider's request for comment.