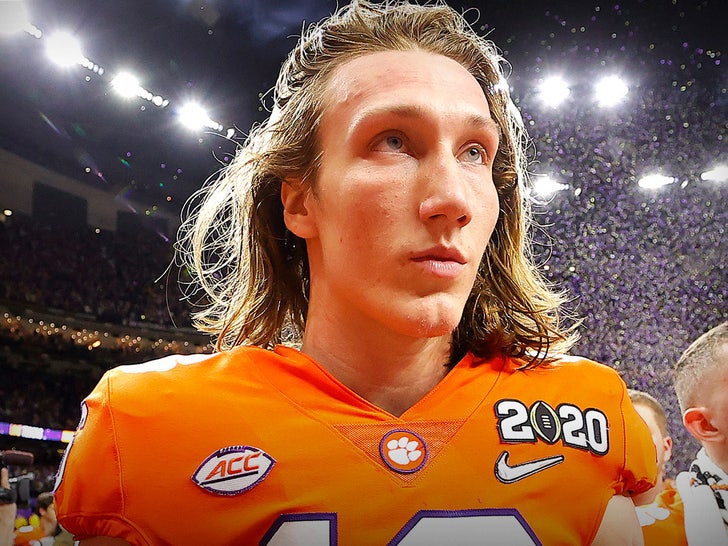 Clemson QB Trevor Lawrence is adamant he WANTS to play college football this season — even spelling out reasons why it’s imperative for so many players — but it ain’t lookin’ good.

The QB — the projected #1 overall pick in the 2021 NFL Draft — essentially argued athletes are safer from COVID in the college environment than back in their own homes.

“People are at just as much, if not more risk, if we don’t play,” Lawrence said Sunday on Twitter.

“Players will all be sent home to their own communities where social distancing is highly unlikely and medical care and expenses will be placed on the families if they were to contract covid19.”

“Not to mention the players coming from situations that are not good for them/their future and having to go back to that.”

Lawrence says football “is a safe haven for so many people.”

“We are more likely to get the virus in everyday life than playing football.”

“Having a season also incentivizes players being safe and taking all of the right precautions to try to avoid contracting covid because the season/ teammates safety is on the line.”

“Without the season, as we’ve seen already, people will not social distance or wear masks and take the proper precautions.”

Fair points, but while Lawrence was making his case … the leaders of college football’s Power 5 conferences (ACC, Big 12, Pac-12 and SEC) were holding an emergency meeting to talk about the likelihood of no college football season in the fall.

No official decisions were made, but ESPN reports the leaders were discussing how they can work together if fall sports are canceled or postponed.

The takeaway from ESPN’s report is it seems a postponement is the likely path at this point.

Meanwhile, Lawrence joined several other major college football stars in posting a message saying #WeWantToPlay … which outlines the conditions that need to be met in order for the players to be on board with a 2020 college football season.

—  “Universal mandated health and safety procedures to protect college athletes against covid-19 among all conferences throughout the NCAA.”

— “Give players the opportunity to opt out and respect their decision.”

— “Guarantee eligibility whether a player chooses to play the season or not.”

— “Use our voices to establish open communication and trust between players and officials; ultimately create a College Football Players Association [with] representatives of the players of all Power 5 conferences.”