The World’s Most Luxurious Prison

Back at the dawn of time, when a pint of Old Hooky was 65p and a pack of JPS cost a quid, the Evesham Journal sent me to interview a publican who had just installed a microwave oven.

That was the first microwave on our patch. Locals had never seen one. But the revelation wasn’t the futuristic electronic device — it was the hot pies that pinged out.

We didn’t know it then, but civilisation was ending — something that Tom Kerridge didn’t grasp, on Saving Britain’s Pubs (BBC2). 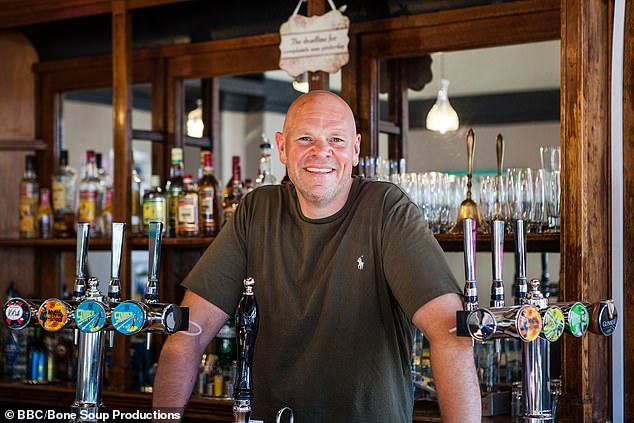 Tom Kerridge didn’t play at being Gordon Ramsay in Saving Britain’s Pubs – instead, he pointed out the obvious

England’s hostelries began to die out when they got ideas above their station and thought they could be restaurants, too.

And Tom is part of the problem: he turned the Hand And Flowers in Marlow into a Michelin two-starred foodie haven. It might be a roaring success, it may very well serve morsels of manna and ambrosia, but it’s no longer a traditional pub.

The classic West Indian dishes at the Golden Anchor in Peckham certainly were not drawing the crowds. Tom tried the chicken foot soup which, in obedience to the Trade Descriptions Act, contained boiled chickens’ feet.

Flowing locks of the night:

We’re used to seeing Mock The Week’s Dara O Briain with a polished bonce, but University Challenge: Children In Need Special (BBC1) found a photo from his long-haired student days. ‘I look like Oscar Wilde,’ said Dara proudly. No one else thought so.

‘I’m gonna swerve that,’ he said, picking a claw out of his bowl. Barmaid-turned-landlady Lana was pouring her heart into the pub. It had a reputation as a gangster ‘Yardie’ bolthole when she took over. She chased away the drug dealers: ‘I was terrified, but I wasn’t gonna have it,’ she said.

For that, she deserves lifelong exemption from business rates, but instead the only support she got was from the dominoes players, old codgers who could make one pint last all night.

Thankfully, Tom didn’t play at being Gordon Ramsay, marching in with sweary sneers to turn the business upside-down. Instead, he pointed out the obvious — Lana needed more drinkers.

He suggested a beer tasting. That did the trick.

Tom offered similar, sensible advice at two glorious pubs, the White Hart in Chilsworthy, Cornwall, and the Prince Albert in Stroud (both of them places that must since have been crippled by the wretched Covid restrictions).

Pubs, he concluded, can survive only if they serve as a living room for the neighbourhood. To which I’d add, you don’t want a microwave in your front room. The gadgets were, however, in the cells at Halden maximum security jail in Norway, inspected by Ann Widdecombe on The World’s Most Luxurious Prison (C5).

Inmates also had ensuite bathrooms with showers and fridges, and televisions with DVD players above their beds. ‘I’m amazed they haven’t got a mini-bar,’ snorted Ann, a former Tory prisons minister. She was torn, in two minds over Norway’s excellent record of reforming criminals and her innate disgust at mollycoddling murderers.

The statistics showed that this Scandinavian country has the lowest rates of re-offending in the world. Ann couldn’t believe that was down to friendly handshakes from prison warders and free condoms during weekend visits from partners.

But by the end of the hour, she still couldn’t explain her scepticism. She didn’t overcome an unexpected shyness with the convicts either. One told her he was serving 20 years. Ann suspected he’d committed terrible crimes, but she didn’t like to ask.

And in the workshop, where prisoners were trusted with potentially lethal tools, she talked to a prisoner whose nickname was the Grillmaster: ‘I’m not going to ask why,’ she announced. As a journalist, Ann made a very good ballroom dancer.