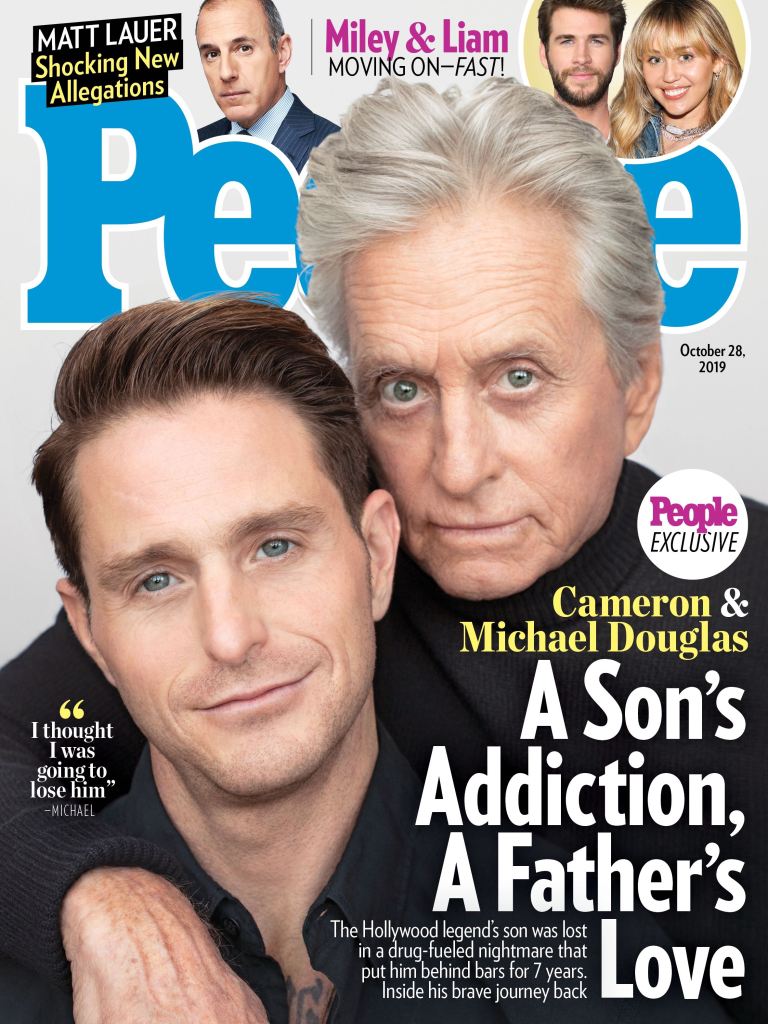 The past few issues of People Magazine have either celebrated highly successful people of color or tried to whitewash white celebrity criminals. Case in point: Viola Davis (LOVE her), Felicity Huffman, Tyler Perry, Oprah and now Michael Douglas’s felon drug dealing son, Cameron. Cameron Douglas ran a multi-state drug operation and was caught trying to sell a pound and a half of meth to a DEA agent. His sentence would have been much shorter if he didn’t violate his probation multiple times by being caught with drugs while on house arrest and in prison. Go here for a recap. Michael also thinks his son was made an example of because of his name. Well they’re not above using that name and his connections to score the cover of People Magazine. They’re promoting Cameron’s new book called Long Way Home. The last time we covered Cameron he failed a drug test while on probation. People’s story is focused on Cameron as a hopeless addict who has been able to beat his addiction.

“I hated the wreckage I saw in my life because of drugs, but I just couldn’t stop,” Cameron, now 40, tells PEOPLE exclusively in this week’s cover story.

Feeling all but helpless on the sidelines were Cameron’s parents, Michael, and Diandra, 63, a former model and producer, whose attempts at getting their son help over the years largely fell on deaf ears.

“There were moments when hope dwindled… and then it’s just a train out of the station,” Michael, 75, tells PEOPLE exclusively. “Life became a series of crises. I thought I was going to lose him.”

For a time, Cameron shot up cocaine nearly daily and withstood drug-induced seizures.

“It’s the sneaky power, the stranglehold that addiction has when you’re in the throes of it,” he says. “When you get that far down the rabbit hole, there are a couple options: there’s prison and then there’s death.”

Cameron narrowly escaped the latter, but in 2009 a DEA sting operation landed him behind bars. He faced a five-year term for conspiracy to distribute meth and cocaine. In all, Cameron would spend nearly eight years in prison — the sentence was extended for possession while he was incarcerated — but he emerged in 2016 a changed man.

Today, Cameron is raising his beloved 22-month-old daughter Lua with longtime girlfriend Viviane Thiebes, 41, a yoga instructor, working on restarting his acting career and feeling deep gratitude that his family never gave up on him.

Determined to help other addicts “seek help – and maybe save a life,” Cameron shares his harrowing, and ultimately inspiring, journey in an upcoming memoir, Long Way Home, excerpted exclusively in this week’s issue.

As Kaiser often says, both things can be true. Cameron can be a former addict who had a serious problem AND he can be a manipulative person who used to commit crimes and is using his family name to sell his book. He has a new short on Amazon Prime too, so it’s safe to assume he also wants an acting career. I’m glad Cameron is sober and I have sympathy for addicts, but this does not rate the cover of People no matter who his dad is.

Just check out the covers of People for the past year and tell me if those look balanced at all. All the people of color are the most successful and talented then the rest are royals, celebrities, reality stars and criminals. Guess they needed another one for this week and they were running out of college scammers.

Look at this douchebag shirtless in his Eames chair. I’m so jealous, I want one of those chairs.

I am thoroughly excited to share the cover of my book #LongWayHome…take a journey with me through my Life on 10/23 http://bit.ly/2APRa0H [email protected]

Working with the very talented @serebenyc always brings something powerful and inspiring to the surface. #WalktheWalk ⚒