Huh. This is a bit of a surprise.

As you probably saw last week, Britney Spears posted some VERY risqué pics to her Instagram on Thursday. Some of the most we’ve seen of the Toxic singer ever if we’re being honest. (Though she deleted the full back ones right away — possibly at the behest of IG’s censors.)

However, some eagle-eyed fans were able to look past all that Brit to the hotel room around her — and spotted something hinky. See, Brit captioned one of the uploads:

“Waking up in London with my Cabo thong”

But that painting behind her was identified as one at a hotel in Los Angeles!

Obviously more than one hotel on more than one continent could get their hands on that mass-produced artwork. So we weren’t exactly convinced by the evidence at the time.

However, on Monday The Sun CONFIRMED the fan theory. This was actually a hotel in El Lay, the Four Seasons in Westlake Village. A source spilled to the outlet:

“Britney appeared to have checked in alone at the hotel and didn’t have any security with her. She spent the night holed up ordering late night room service and seemed to be enjoying posting snaps on Instagram for her fans.”

That last part we can obviously corroborate! LOLz! She posted around a dozen pics, a couple of which, as previously mentioned, were deleted. 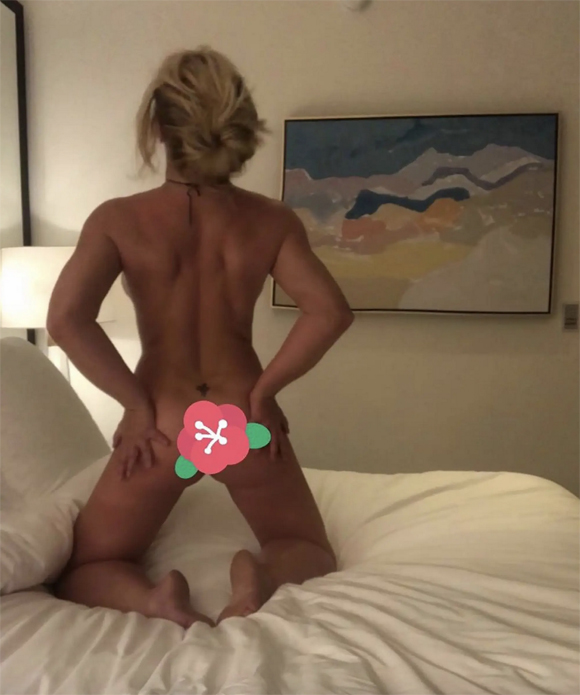 Britney is believed to have stayed in one of the place’s “waterfall suites” — which run about $2,495 per night! And we know she was alone because in another post she explained she was the one taking all the naked photos, writing:

The question is… why??

The Four Seasons is just a few minutes away from her house. Why is she spending big bucks to go stay alone in a hotel — away from her new husband. She and Sam Asghari just got married LAST MONTH. And he wasn’t out of town, at least not based on his IG feed — which showed him at the couple’s home gym at their old house in Thousand Oaks. (Though at this point what can we trust? LOLz!) So if this is true, she went down the road and spent nearly three grand on a luxe hotel and room service? And then told a tale?? Why?!

Did they have a fight? They still have both houses, maybe he left to be alone at the other one — and she didn’t feel comfortable in that big house all alone? It wouldn’t be the first time a big empty house freaked her out…

What do YOU think happened, Britney fans??