Taking to her social media platform, the former Victoria’s Secret Angel clarifies her comments about her tight ensemble, noting that she’s only joking about it.

AceShowbiz –Bella Hadid has clarified her comments about her Met Gala tight corset. Taking to social media, the sister of Gigi Hadid revealed the real reason why she nearly “blacked out” on the red carpet.

“I want to make something very clear,” the 25-year-old beauty wrote in her statement she posted via Instagram Story on Tuesday, May 10. Along with a news headline that read, “Bella Hadid Jokes She ‘Blacked Out’ on Met Gala Carpet Due to Tight Corset: ‘I Couldn’t Breathe,’ ” she pointed out, “This is not at all what I [meant to] say. I didn’t say I blacked out because of my corset.”

Bella went on to explain, “I joked that I blacked out, not because of my corset, but from the regular anxieties and excitement of the carpet.” She continued, “I meant more like it goes by in a flash. So quickly that ya barely remember it! I should have said that.”

In her post, Bella further noted that “corsets in general are pretty uncomfortable/ hard on the lungs.” However, the former Victoria’s Secret Angel stated that her corset “fit perfectly with enough room to eat and drink.” 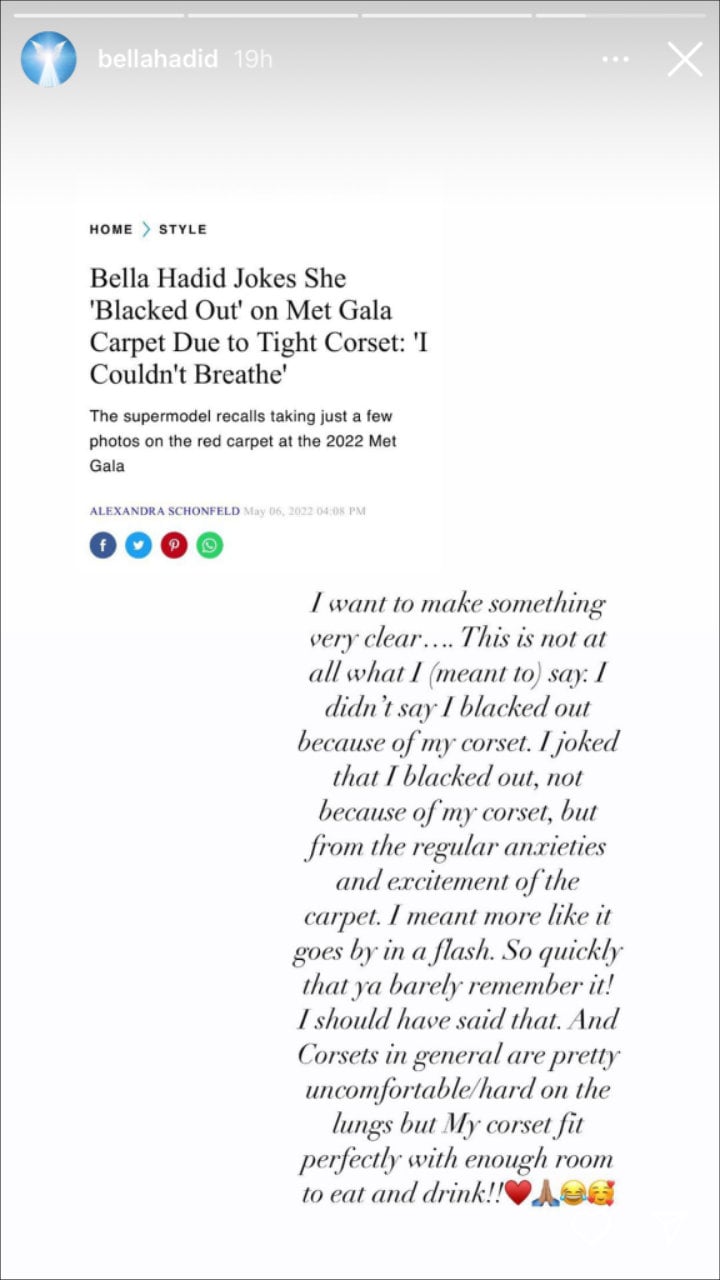 Of the star-studded event, Bella told Interview, “I literally, like, blacked out. I don’t even think I got one good photo on the red carpet.” She further said, “Now that I look back, I realize that people literally stand there for 20 minutes and they give. I looked once to the left, once to the right, and I ran up the stairs.”

The model added that she couldn’t have been there for “more than three minutes.” She explained to the magazine, “I don’t know if that was my anxiety, or maybe the waist was giving cinch and I couldn’t breathe. I mean, there were probably a lot of things happening.”