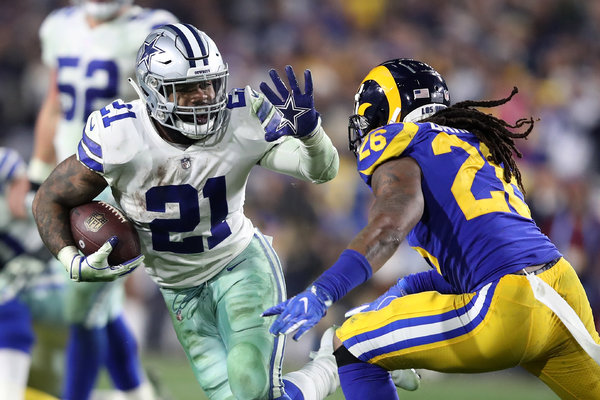 The summer ritual of N.F.L. training camp is fully underway. Film rooms are prepared, equipment is unwrapped and players have checked into their rooms.

Most of them, anyway. As usual, some players, dissatisfied with their contracts, are not reporting. Sometimes the holdouts last a day or two. Sometimes, as was the case last season with Le’Veon Bell, the former Pittsburgh Steeler now with the Jets, they last all year.

And holdouts tend to follow a familiar pattern, with the player lying low and the team saying all the right things about “working to get a deal done.”

While receiver Julio Jones of the Atlanta Falcons has turned up for camp anyway, other key players are no-shows, leveraging their attendance as a bargaining chip. Here are the absentees still negotiating.

Who is he? The superstar running back who topped the N.F.L. in yards per game in each of his three seasons. He was not on the plane that took the team to Oxnard, Calif., for camp, which opened Friday.

What’s his salary situation? He has two years left on a $25 million rookie contract under which the team picked up the fifth-year option last season. Todd Gurley, the Rams’ star rusher, signed a four-year, $57 million contract with $45 million guaranteed a year ago.

How important is he? Crucial. In an era when running backs have been somewhat marginalized, Elliott is a vital element of the Cowboys’ offense. But the two other most important players in that offense — quarterback Dak Prescott and wide receiver Amari Cooper — are in contract talks with the organization and are in camp.

Who is his backup? Tony Pollard, a rookie selected in the fourth round out of Memphis.

Is the team saying the right things? “Zeke’s had a great off-season and we’re certainly excited about what he can do for our football team,” Coach Jason Garrett said.

Who is he? A No. 1 overall draft pick, he has starred as an edge rusher for four seasons. Clowney did not show up to camp and is reportedly planning to sit out the preseason.

What’s his salary situation? He has a one-year, $16 million deal available to him under the franchise tag, although he has not signed it. The players association is reportedly involved in a dispute over whether he is a linebacker or a defensive end; a linebacker gets $1.6 million less in salary under the tag.

How important is he? Along with J.J. Watt, Clowney is a mainstay of the Texans’ defense, which finished 2018 as the league’s third-most effective against the run.

Who is his backup? Duke Ejiofor, a rookie with six solo tackles last year, would get more playing time in his absence.

Is the team saying the right things? “I can tell you unequivocally that we want Jadeveon Clowney here,” Coach Bill O’Brien said.

Who is he? An All-Pro wide receiver who has produced three straight strong seasons. He did not report for the first day of camp.

What’s his salary situation? He will make $1.6 million under the final year of his rookie deal. He has been negotiating a new contract and will want a huge upgrade comparable to the $16 million and $17 million base salaries of top-earning receivers like Oakland’s Antonio Brown and Tampa Bay’s Mike Evans.

How important is he? Vital. He led the league in receptions with 125.

Is the team saying the right things? “It’s always a negotiation,” General Manager Mickey Loomis told ESPN. “It’s a give and take. And then ultimately the urgency that you’d like to have happen in February, March, April or May gets dragged out into training camp. It’s just the nature of the business.”

Who is he? A two-time Pro Bowl running back. He is not in camp, and many are reporting a long holdout is possible.

What’s his salary situation? He is due to make $5.6 million in his fifth year, his largest salary yet.

How important is he? He was by far the team’s best rusher, tops in rushes, yards and touchdowns (10). He also caught 50 passes for four more touchdowns.

Who is his backup? Austin Ekeler, a third-year player, was second to Gordon in most of the rushing categories last year.

Is the team saying the right things? “I love Melvin Gordon,” General Manager Tom Telesco told NFL.com. “I always look at the player’s side, so I can see it. It doesn’t mean I agree with it, but I can kind of see what his thought process is.”

Who is he? An offensive lineman with a streak of seven straight Pro Bowl appearances.

What’s his salary situation? He is due to make $14 million in salary and bonuses in the fourth year of a five-year deal.

How important is he? Though Washington has had a rough decade, it could always count on the stability of Williams on the line. It does not seem deep at tackle.

Who is his backup? Ereck Flowers, the former Giant, may get the nod at left tackle. The Redskins may look to make a signing as well.

Who is he? A fourth-year defensive end, he did not show up for Day 1 of camp, though some speculate he will turn up soon.

What’s his salary situation? He will make $2.2 million in the final year of his rookie deal. He has spoken of wanting a long-term contract.

How important is he? The Jaguars, 5-11 last year, don’t have a lot of plusses, but they have been able to count on a good pass rush from Ngakoue.

Who is his backup? The No. 7 overall pick, Josh Allen of Kentucky, will be pressed into service quickly if Ngakoue does not return.

Is the team saying the right things? “He’s going to come,” Coach Doug Marrone told ESPN. “He will report. I don’t know when.”

Victor Mather covers every sport, no matter how small.