Arie and Lauren Ludendyk have been entertaining us with their adorable family for years now. The duo, who met in a shocking season of “The Bachelor,” announced that they were expecting their first child in 2018. After the birth of their daughter, Alessi, Aerie and Lauren announced in 2020 that they were expecting again! It was a big surprise because the duo was expecting… a duo. Yep, twins.

As if this wasn’t big enough news, Arie and Lauren announced in April 2021 that they had purchased a home on Maui in Hawaii and would be leaving Arizona. They shared the news on their YouTube channel in a touching video, featuring a heavily pregnant Lauren.

It hasn’t been all bliss for the pair, though. The couple announced that they had previously suffered a miscarriage in May 2020. With such a sad moment in their past, it’s that much more joyful to find out that they just had a baby girl and boy, and we know the name of the baby boy. 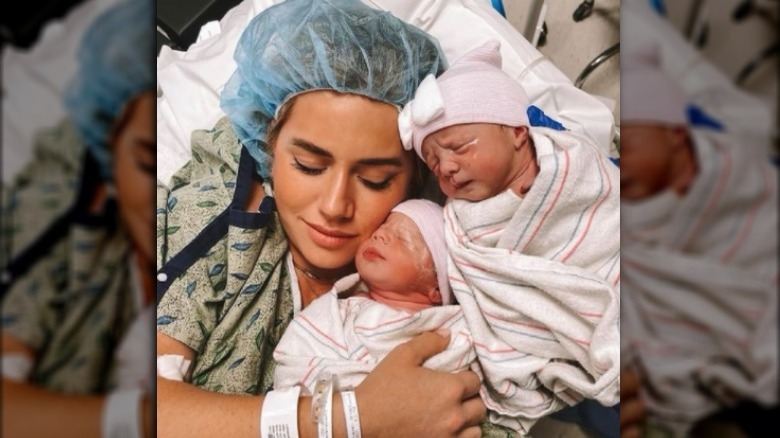 Arie and Lauren Ludendyk used their YouTube channel to give fans news on the birth of their twins. On June 16, 2021, they gave fans a tour of the hospital. Lauren said to the camera, “Today, we are taking at least one of the babies home.”

As Arie and Lauren explained in the video, their little ones spent a few more days in the hospital for precautions. Arie explained, “She’s having some trouble with her breathing… she’s not on oxygen. She’s perfectly healthy. Her development’s just a little bit behind.” While their baby girl stayed at the hospital for a little bit longer, Arie and Lauren brought their son home, and he got to meet his older sister. Alessi held her little brother and said his name: baby Lux.

Arie couldn’t help but share the adorable moment on Instagram, with the precious caption: “Emotional few days but Alessi meeting her little brother today was cuter than words could describe. We’ll post more soon just resting.” We can’t wait for more updates about the couple’s baby girl, too!