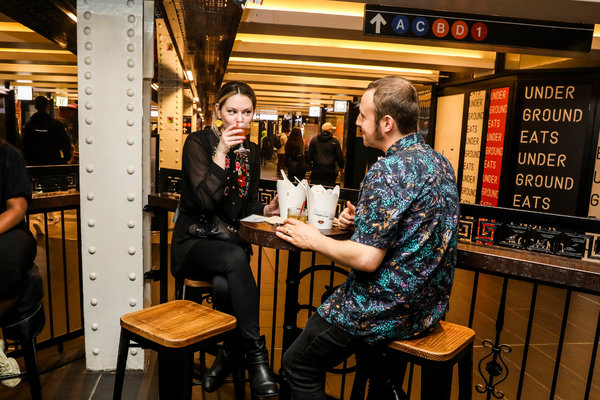 It’s been nearly 20 years since Siberia, a dive bar inside the 50th Street station of the 1 line, left its home in the subway. (It later closed for good.) But now there’s a new place to drink near the din of rumbling subterranean public transportation.

Merchants’ Gate opened in May at the Columbus Circle Station, a cleaner, buffed-up bar that dares you to forget that you’re in a subway station — so much so that patrons may leave their work bags unattended at their high-tops to get a refill of Samuel Adams. When was the last time that happened in the subway?

Named after the Columbus Circle entrance to Central Park, Merchants’ Gate is at the southern end of the station’s three-year-old food hall (around West 57th Street), sandwiched between Champion Pizza and Taheni Mediterranean Grill. About the length of a subway car and double its width, the bar takes it design cue from old-school subway stations, with white tiled walls, exposed pipes and industrial wire-caged lights.

On a recent Friday around 10 p.m., the bar was filled with small groups: a 20-something couple with duffel bags and puzzled expressions resting for a pit stop; and a few solo men in their 40s and 50s sporting baseball hats and short-sleeve polos watching a Red Sox game on the flat screens behind the bar. One middle-aged pair dressed in business casual attire were shaking hands and taking shots with the bartender.

A generic soundtrack of pop and rock, including Miley Cyrus’s “Jolene,” “One Kiss” by Dua Lipa, and “When the Party’s Over” by Billie Eilish.

No MetroCard required. Anyone, even those polishing off their to-go meals from nearby food vendors, can walk right in. During a recent visit, there was no bouncer to check IDs.

The bartender, charismatic and knowledgeable, stopped a customer from ordering the Brooklyn Mercedes cocktail (“I’m sure I make it perfectly,” he said, “but it’s a weird combination of ingredients.”).

He recommended the “There’s a Train In Front of Us, Have One More,” a smooth and springy mix of Tito’s vodka, elderflower, cucumber, mint and soda water. The cocktail list veers trendy, with options like Southbound Local (mezcal, vermouth, Campari, mole bitters), $16, and Frosé (rosé, strawberry purée), $12.