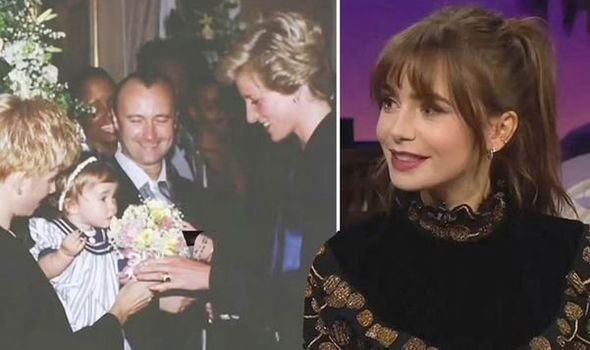 Phil Collins’ daughter Lily Collins has explained to James Corden that she was often in the company of royals due to her dad working with the Prince’s Trust. And, it’s likely they’ll remember her cheeky ways as a toddler after a couple of humorous encounters.

The Emily In Paris star was shown a picture of her as a toddler with her mum and dad chatting to Princess Diana, who was holding flowers.

The 32-year-old said that while she didn’t remember meeting the mother-of-two, she was told she tried to pinch her bouquet.

As the picture was shown, The Late Late Show host asked: “Here you are with your dad Phil Collins, this is you here being handed some flowers from Princess Diana.

“Do you have any recollection of this moment in time?”

She spilled: “I’ve been told this is what happened.

“That’s my mum and my dad and I and it’s at a Prince’s Trust event and I’m giving Diana flowers, but the second that she went to take them, I then tried to pull them back.”

She laughed: “So as you can imagine, all the air was sucked out of the room.

“I was wearing a cute dress, so who’s going to really punish me there?”

Lily went on to detail the moment she threw an item at Prince Charles, also as a toddler.

“I was playing with some toys with Prince Charles and I proceeded to kind of like throw something at him, like throw a toy telephone at his head, which, again, all the air was sucked out of the room,” she added.

Now 32, Lily has since gone on to become successful with her acting career.

She is currently starring in Emily In Paris as the main character Emily Cooper.

Earlier this week, she shared a clip of her on a poster from the series vandalised, but saw the funny side to it.

The actress was seen with pink ink under her eyes and on her nose, like a clown.

She shared the post on her Instagram page, writing: “I can’t say I love the new look, Em. But A for effort.”

Ellabalinska wrote: “One step closer to Emily in Berlin.”

Mikis_world typed: “Why do people do this omg… But props to u for not caring about it haha.”(sic)